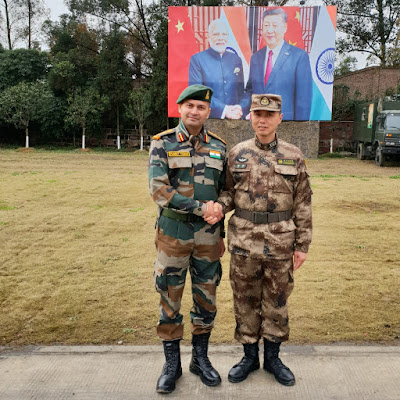 Opening ceremony for the 7th Sino-India joint exercise Hand-in-Hand 2018, scheduled from 10 to 23 December 2018 was held on 11 December 2018 at Chengdu, China.  Company size contingents of 11 SIKHLI from Indian Army and a regiment from Tibetan Military District of People’s Liberation Army participated in the exercise. The Indian contingent was led by Col Puneet Pratap Singh Tomar, Commanding Officer, 11 SIKHLI, while the Chinese contingent was led by Col Zhou Jun. Major General Kuang Dewang, senior representative of joint training from PLA, reviewed the parade in presence of a number of officials from both the nations.

The exercise will consist of a balance of indoor classes and outdoor training activities. The aim of the exercise is to build and promote close relations between armies of both the countries and to enhance ability of the joint exercise commander to take military contingents of both nations under command.  The exercise will involve tactical level operations in an international counter insurgency/ counter terrorism environment under UN mandate. 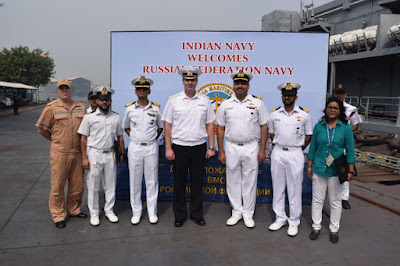 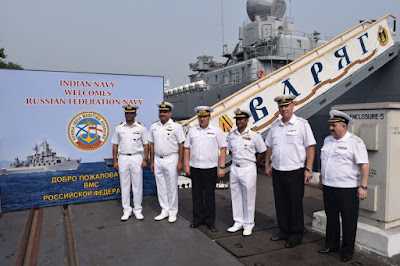 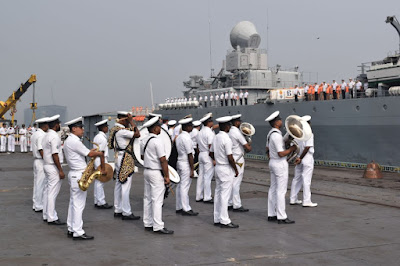 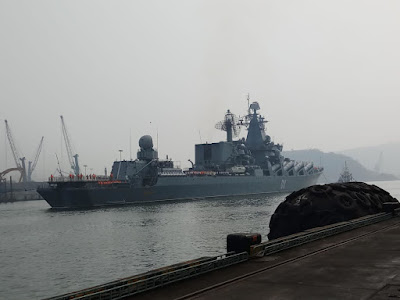 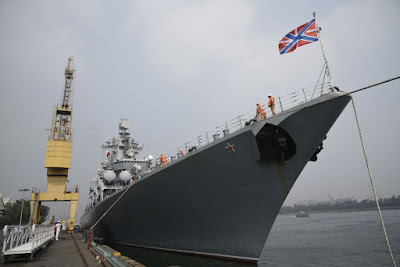 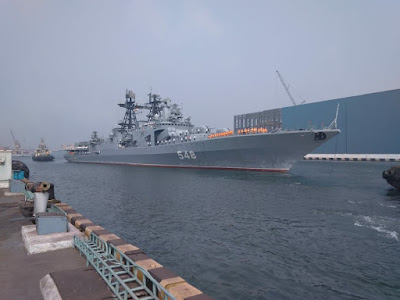 Russian Federation Navy (RuFN) Ships Varyag,  Admiral Panteleyev and Boris Butoma arrived Visakhapatnam to participate in INDRA NAVY, the bilateral maritime exercise between Indian Navy and Russian Federation Navy exercise on 09 Dec 18.  The 10th edition of exercise INDRA NAVY will be conducted at/off Visakhapatnam from 09 to 16 December 2018. The primary aim of the exercise is to increase inter-operability amongst the two navies, develop common understanding and procedures for maritime security operations. Initiated in 2003, INDRA NAVY exercise has matured over the years with increase in scope, complexity and level of participation.

This edition of the exercise would be held in two phases. The Harbour Phase would be held at Visakhapatnam from 09 to 12 December 2018 and would encompass planning conferences, professional interactions, cultural visits, sports fixtures and formal calls between Flag Officers/ Senior Officers of participating navies. The Sea Phase from 13 to 16 December 2018 would be conducted in the Bay of Bengal. The thrust of exercises at sea would be on Anti Submarine Warfare (ASW), Air Defence drills, Surface Firings, Visit Board Search and Seizure (VBSS) operations and tactical procedures.       During exercise INDRA NAVY-18, the Indian Navy would be represented  by INS Ranvir, a guided missile destroyer, INS Satpura, an indigenous frigate, INS Kadmatt, an indigenous anti- submarine warfare (ASW) corvette, IN Ships Kuthar and Khanjar both indigenous missile corvettes and INS Jyoti, a fleet tanker. In addition, one Sindhughosh class submarine, Dornier maritime patrol aircraft, Hawk fighter aircraft and other integral rotary wing helicopters would be taking part in the exercise. The Indian Navy ships participating in the exercise would be under the Command of Rear Admiral Dinesh K Tripathi, Flag Officer Commanding, Eastern Fleet. Ships of the Russian Federation Navy (RuFN) would be under the Command of Rear Admiral Mikhailov Edward Evgenievich, Chief of the Headquarters, Submarine Forces, Pacific Fleet and ships from the Pacific Fleet, based at Vladivostok.          Admiral Sunil Lanba, Chief of the Naval Staff, Indian Navy visited Russia from 26 to 29 November 2018 to consolidate bilateral defence relations and to explore new avenues for defence cooperation. The Indian Navy interacts with Russian Federation Navy on many fronts, which include operational interactions, training, hydrographic cooperation and exchange of Subject Matter Experts in various fields through the medium of Navy-to-Navy Staff Talks. Exercise INDRA NAVY-18 would help to further strengthen mutual confidence and inter-operability and also enable sharing of best practices between both the navies. The exercise will be yet another milestone in strengthening maritime security cooperation between the two navies and will serve to reinforce the long standing bond of friendship between the countries.

Ex AVIAINDRA, a service specific exercise between Indian Air Force and Russian Federation Aerospace Force (RFSAF), is planned at Air Force Station Jodhpur from 10-21 Dec 2018. The inaugural IAF-RFSAF Ex AVIAINDRA was conducted in 2014. AVIAINDRA-2018 is the second in the series of bilateral joint exercise between IAF-RFSAF. The exercise is planned in two phases. The exercise is unique wherein the foreign participant does not bring its air assets. In Russia, the IAF pilots flew alongside their Russian counterparts in RFSAF aircraft at Lipetsk from 17 Sep 18 to 28 Sep 18. In India, the RFSAF pilots will fly alongside their Indian counterparts in the IAF aircraft, which are common to both Air Forces.

This was a first of its kind Exercise undertaken by the Indian Air Force in which firing of four different class of missiles – AKASH, SPYDER, OSA-AK-M and IGLA was successfully carried out on 05th, 07th and 08th Dec  2018 during day and night in an integrated networked environment.  The Chief of the Air Staff along with AOC-in-C Southern Air Command and number of other dignitaries witnessed the missile launch.  Later, while interacting with the station personnel and the missile combat crew, he lauded their efforts towards the successful conduct of the exercise. He conveyed that the Exercise is yet another major milestone achieved by the IAF.  He stated that this exercise will help to improve the combat skills of our missile Squadron crew and will go a long way in strengthening the Air Defence preparedness of the country. Further while addressing the missile combat crew, he stressed that improving professional skills during exercises of this kind will improve the combat capability of the IAF.

During the interaction, Chief of the Air Staff emphasized on the importance of joint exercises as they create an environment of camaraderie and an opportunity to learn from each other’s best practices in enhancing operational synergy.

Ex Cope India 2018 is a testimony of the growing Indo-US military relationship. In the past, IAF has participated in International exercises with USAF including the Ex-Red Flag. Recently for the first time, IAF had participated in Ex Pitch Black at Darwin, Australia in which 130 aircraft from 16 countries took part.

The Japanese Air Self Defence Force (JASDF) is in India for a bilateral air exercise SHINYUU Maitri-18 with Indian Air Force from 03-07 Dec 18 at A F Station Agra. The theme of the exercise is joint Mobility/Humanitarian Assistance & Disaster Relief (HADR) on Transport aircraft. The JASDF C2 aircraft along with aircrew/observers are part of this first air exercise between the two Air Forces. IAF is participating with An-32 and C-17 aircraft with aircrew & observers. The focus of the exercise is set for the IAF and JASDF crews to undertake Joint Mobility/ HADR operations. Display of heavy loading/ off loading are also planned to be practiced during this exercise.


Naval cooperation between India and the United Kingdom is based on the long term strategic relationship between both countries. Both Navies have, over the years, undertaken bilateral activities such as training exchanges and technical cooperation. The Bilateral KONKAN exercise provides a platform for the two Navies to periodically exercise at sea and in harbour, so as to build interoperability and share best practices.

The KONKAN series of exercises commenced in 2004, and since then has grown in scale. KONKAN-2018 will be conducted from 28 Nov to 06 Dec 18 off Goa with units participating from both navies. The harbour phase is scheduled from 28 Nov to 30 Nov 18, followed by the sea phase from 02 to 06 Dec 18. The Royal Navy will be represented by HMS Dragon, a Type 45 Class Destroyer equipped with an integral Wildcat helicopter. The Indian Navy will field INS Kolkata, the first ship of latest Kolkata class destroyers, equipped with integral Seaking and an IN submarine. In addition, IN maritime patrol aircraft, Dornier will also participate in the exercise.

The regular IN-RN interaction over the years has resulted in an increase in the professional content of the bilateral exercise. The thrust of the exercise this year would be on Anti-Air warfare, Anti-Surface Warfare, Anti-Submarine Warfare, Visit Board Search and Seizure (VBSS) and Seamanship Evolutions. Besides exercises at sea, KONKAN-2018 also encompasses professional interactions and sports fixtures.

The exercise is aimed at deriving mutual benefit from each others’ experiences and is indicative of the continuing cooperation between the two countries. The inter-operability achieved over the years as a result of such exercises has proved to be operationally beneficial to both navies. The naval cooperation is a tangible symbol of the commitment of both nations in ensuring a positive climate at sea for enhancing strategic stability and promoting economic prosperity.

Classes were organised on cordon and search operations, raid on terrorist hideout, intelligence gathering and sharing, perception management, humanitarian laws and hostage rescue. Integrated live firing was carried out apart from specialised joint training which included road opening drills, clearance of built up areas and destruction of a rebel stronghold in an urban terrain setting. The participating contingents also carried out specialised joint training on hostage rescue by slithering from MI-17 helicopters.