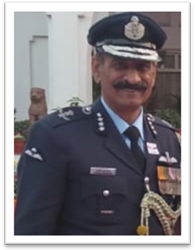 Commissioned as Indian Air Force Pilot, in December1981, Air Marshal Sachdeva has logged over 7,200 hours of transport and instructional flying experience. Cat 'A' qualified flying instructor has held some of the prestigious appointments in Air Force, Joint Services and NTRO. He was an Air Force examiner and also commanded a frontline Transport Squadron, a Transport Base and the College of Defence Management. He, at HQ IDS, was ACIDS ICT and ACIDS Jt Ops, at NTRO he was Centre Director Aviation. Prior to his present appointment at HQ IDS, he was the Senior Air Staff Officer at HQ Southern Air Command in Thiruvananthapuram.

Two Indian Navy sailors dead in an accident at the Indian Naval aviation base - INS Garuda  in Kochi, Kerala, when the door of a helicopter hangar collapsed.

About 0930 hrs on 27th December , one of the hangar door (sliding) of 322 hangar (occupied by 321 flight now) fell on Ajith Singh EAR 3 and Naveen EAA 3. Both the  sailors were extremely critical and taken to INHS Sanjivani. The duo succumbed to their injuries by 1040 hrs. 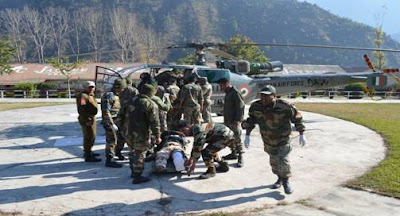 On 24 Dec 18 at 1040 hrs Western Air Command of Indian Air force launched two Cheetah helicopters, of the Udhampur based unit “HOVERING HAWKS” to carry out casualty evacuation from Chanderkot helipad on a short notice. As per initial information received a civil bus on move from Badgam to Kanpur fell into the valley near Ramban which led to several critical casualties. At 1045 hrs, 02 heptrs and 02 set of crew were standby to takeoff from Udhampur to Chanderkot helipad where the casualties were initially evacuated. On getting a go ahead for one helicopter at 1050 hrs, Wing Commander V Mehta as captain with co-pilot Arunima Vidhate got airborne from Udhampur. Meanwhile after ascertaining the requirement, on the call of Wg Cdr V Mehta, second helicopter got airborne from Udhampur with SqnLdr SK Prasad as captain and Flt Lt Siddhant Yadav as co-pilot.
First helicopter landed at Chanderkot Helipad at 1125 hrs and picked up 03 critically injured Jawans of ITBP who were amongst the 09 critically injured travelling in fateful bus. The other helicopter landed at 1225 hrs and picked 02 remaining critical Jawans along with medical attendant. 04 Casualties were picked up by civil helicopter. “Due to power station and several microwave towers on eastern side of helipad, helicopter had to carry out one sided approaches and take offs with thorough traffic coordination with civil helicopters. Additionally, the site had limited manoeuvring space” said the mission leader and captain of the lead aircraft Wg Cdr Vishal Mehta.

Both the helicopter continued to Jammu airport, where the ambulance was ready to attend the casualty. The casualties suffered serious injuries which included facial/head injuries, fractured leg and major bruises on arms. Although they had been recovered from the accident site to Ramban DH their situation was highly critical and speedy evacuation to a better medical facility was the only lifesaving measure available.

The crew of HOVERING HAWKS executed the mission with extreme professionalism keeping up the highest traditions of the IAF.

It will not only encourage the UAV manufacturing in the country but also provide an opportunity to the Armed Forces to assess the capabilities that exist in the world. The UAV market is one of the fastest growing fields in the world. Role of UAVs in defence sector is ever-increasing on account of new additionalities being added to them making them fit for intelligence, surveillance, reconnaissance, electronic warfare and strike missions.

‘Drone Olympics’ is open to both Indian and international players. Three categories of the event, planned during the competition are Surveillance Challenge with four sub-categories which willdeterminethe surveillance capability of the UAVs. Supply Drop Challenge to assess weight dropping capability and Formation Flying Challenge demonstrating different shapes with group of UAVs.The winners will be honoured with medals and a cash prize of Rs. 38 lakhs to top three winners of each competition. Last date of registration to participate in event is January 26, 2019. 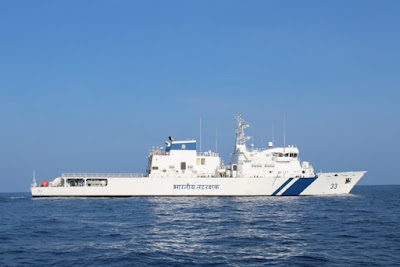 ​ICGS Vikram (“Vikram” means ‘Valorous”), the 1st in the series of    98 meters Offshore Patrol Vessel (OPV) is a newly commissioned ship of Indian Coast Guard. The ship has a compliment of approximately 100 personnel and is commanded by Commandant Raj Kamal Sinha.

ICGS Vikram has been designed and built in India by M/s Larsen & Toubro at its  Defence shipyard at Kattupalli. The ship is fitted with most advanced state-of-the-art technology, navigation and communication equipment, sensor and machinery. The vessel is fitted with a 30mm gun for the fighting efficiency of the ship. The features include an Integrated Bridge System (IBS), Integrated Platform Management System (IPMS), Automated Power Management System (APMS) and High-Power External firefighting system. ICGS Vikram class OPVs are long-range surface ships which operate in Indian maritime zones including island territories. Their role is to conduct coastal and offshore patrolling, policing maritime zones, Search and Rescue, surveillance, anti-smuggling and anti-piracy operations with limited wartime roles. The ship is designed to carry one twin engine helicopter and two high speed boats along with two hull inflatable boats. The ship is also capable of carrying limited pollution response equipment to contain oil spill at sea.

​The ship is on a month long deployment in the GCC which has resulted in the build-up of mutual understanding and comradery amongst Coast Guards of the region. Oman and Indian Coast Guards signed a Memorandum of Understanding on Maritime Crime Prevention at Sea in May 2016 and regularly conduct high level meetings. The next high level meeting is scheduled in India in late 2019. During the three day visit to Muscat, the ship’s crew will utilise the opportunity to undertake various maritime related joint training activities with ROPCG focussing on Marine Pollution Response, Maritime Search & Rescue and Maritime Law enforcement. The close relations developed between the ROGCP and ICG has been very beneficial in coordination of search and rescue efforts in the Arabian Sea.