Visit of COAS to Vietnam

During visit of Hon’ble Prime Minister Mr Narendra Modi to Vietnam in 2016 the relationship was upgraded to comprehensive strategic partnership. Defence cooperation has increased exponentially over the last few years amongst all services including exchange programmes, training assistance and cooperation on various service specific issues.

The visit will be yet another milestone in giving impetus to the strategic partnership between India and Vietnam and taking forward the military to military cooperation to the next level.

The 3rd Defence Ministers’ Dialogue (DMD) between India and Singapore was successfully concluded today. The DMD commenced after both countries signed the revised Defence Cooperation Agreement (DCA) in 2015 to further strengthen the long standing defence relationship between the Singapore Armed Forces (SAF) and the Indian Armed Forces.

Of particular significance during this meeting was the renewal of the Bilateral Agreement for the conduct of Joint Army Training and Exercises in India. This agreement gives out an exhaustive framework for the conduct of joint training as well as exercises for the Singapore Armed Forces in India and will further strengthen the cooperation between the two Armed Forces.

Earlier in the day, Dr Ng attended the final sea phase of the 25th edition of the Singapore-India Maritime Bilateral Exercise - SIMBEX on board INS Shakti. This multi dimensional exercise witnessed participation of ships, submarines a well as aircraft from both sides and live firings at sea. Both Ministers complimented all personnel participating in the milestone event and for making it a success which is a testament of the long standing ties between the armed forces of the two countries.

Both Ministers commended the conclusion of the Navy Implementing Arrangement Concerning Mutual Coordination, Logistics and Services Support in June 2018, which together with the Navy Bilateral Agreement concluded in November 2017, have expanded and deepened bilateral naval cooperation.

Dr Ng expressed appreciation for Indian Prime Minister Narendra Modi’s Keynote Address at the 2018 Shangri-La Dialogue, wherein PM Modi articulated India’s vision for the Indo-Pacific region. In this regard, Singapore strongly supports India’s deep engagement with ASEAN member states participation in patrols along the Straits of Malacca with Singapore and looks forward to a inaugural conduct of the trilateral maritime exercise with Thailand in the Andaman Sea.

Smt. Sitharaman affirmed India’s full support and active participation in the regional security architecture of the ASEAN Defence Ministers’ Meeting (ADMM)-Plus and its many initiatives. As an ADMM Plus member, India supports the adoption of the Guidelines for Air Military Encounters.
As littoral countries astride key Sea Lines of Communication, the Ministers underscored the importance of maintaining freedom of navigation and overflight consistent with international law, including the United Nations Convention on the Law of the Sea.

Smt Sitharaman reaffirmed India’s belief that disputes should be resolved through peaceful means, and in accordance with the universally recognized principles of international law. Both Ministers agreed on the importance of international cooperation in tackling transnational security threats and in particular measures to collectively tackle the threat of terrorism.

Both ministers agreed to step up intelligence and information sharing, particularly in the areas of maritime security and counter terrorism and expand collaboration on submarine safety and rescue.
Ministers also commended the progress in defence technology collaboration under the auspices of the lndia-Singapore Defence Technology Steering Committee and the India-Singapore Defence Industry Working Group. These joint R&D collaborations included areas such as Combat Care and Vehicle Armour.

The Ministers expressed satisfaction at the deepening defence ties between India and Singapore and reaffirmed their commitment to support further initiatives that would promote stability to the region. It was also agreed to hold the 4th DMD in Singapore next year on mutually convenient dates. 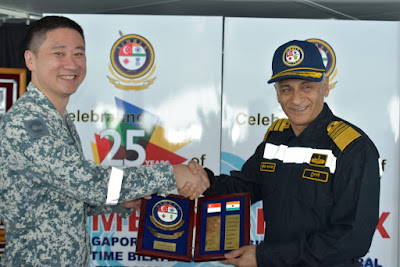 On arrival onboard Indian Navy’s Flag Ship INS Shakti, Dr Hen was briefed on the exercises – those completed and those underway. The Defence Minister had occasion to witness successful missile engagements of aerial targets by ships of the two navies, anti-submarine warfare (ASW) rocket firings, Medium Calibre Gun engagements, flying operations and a steam past by  participating ships and Indian Navy Hawk Jet fighters.  In an unmistakable and emphatic  sign of the close  extent of friendship between the two countries, the Hon Defence Minister received salutes onboard Flag Ship, INS Shakti as ships and aircraft from both the navies steamed and flew past.

The importance attached to the exercises and bilateral relationship between the two countries can be gauged from the high profile presence of Defence Minister Singapore and dignitaries from Defence Ministries of both countries. It may be recalled that SIMBEX 18 marks the largest edition of these exercises thus far  which have been progressing uninterrupted for the since inception in 1994.

The final match was played between Amini School, Afghanistan and Bangladesh KridaShikshaProthishtan (BKSP), Bangladesh in which BKSP won the championship with a solitary goal scored by Habibur Rahman (Jersey No. 15) at the 11th minute.

A total of 95 teams, 1500 players 149 officials participated in the tournament making it one of the biggest tournaments in its category in the entire soccer world. There were 08 teams from 03 overseas countries, viz. Afghanistan, Bangladesh and Nepal.

Best Coach award was presented to Mr. Raghu Kumar of Army Boys Sports Company, Banglore and the Fair Play Trophy was given away to Reliance Foundation School, Mumbai.

The award for Most Contributing School for Football was presented to NNMHSS, Chelembra, Malappuram and Kerala for their contribution towards development of football.

Indian Navy is conducting a Free Health Screening Camp for the children of Government Co-Ed Sarvodaya Vidyalaya, Site 2, Sector 6, Dwarka from 19 to 22 Nov 18. This camp has been organized in co-ordination with Directorate of Education & Sports, NCT, Delhi, as part of the outreach programme of the Indian Navy.

The Camp endeavors to screen all 1900 children of the school by Medical Officers of Indian Navy. Specialists such as Paediatrician, ENT & Eye are also part of the camp to provide specialist opinion and treatment. The Camp will also have a Dental Officer with Dental Chair to treat minor dental ailments.

In addition to medical examination, the medical team will also organise health awareness activities on promotive health for the children through health exhibition.

This five-day event will combine a major trade exhibition of the aerospace and defence industries with public air shows. Besides global leaders and big investors in aerospace industry, the show will also see participation by think-tanks from across the world. Aero India will provide a unique opportunity for exchange of information, ideas and new developments in the aviation industry. Besides giving a fillip to the domestic aviation industry it would further the cause of Make in India.
In Aero India, close to 500 companies, both Indian and foreign, are expected to participate.

Registration for media personnel to visit the exhibition has been opened from today, 20 November 2018. The registration closes on 31 December 2018 and is to be done online on the Aero India 2019 website. There is no fee for media registration, however foreign journalists who wish to cover the event would require to be in possession of a valid ‘J visa’.

The website https://aeroindia.gov.in has the requisite button for registration of media personnel and would require a valid media identity card number and a photograph of less than 500 Kb.
It is expected that in addition of 1200 Indian and foreign journalists would visit the venue.