The National Defence College, New Delhi is the premier seat of learning in India in the field of Defence and Strategic Studies. A Total of 100 officers of the rank of Brigadier and equivalent from the Indian Armed Forces and Joint Secretary level officers from civil, police and allied services attend the prestigious NDC Course each year. Armed forces officers from about 25 friendly foreign countries also attend the course. NDC alumni have gone on to occupy the highest positions in the armed forces and the government both in India and abroad.

The one-year course also qualifies the officers to receive an M Phil degree in Defence and Strategic Studies from the prestigious University of Madras, Chennai. Graduates of the 56th NDC Course (2016 Batch) were awarded the degrees in a convocation ceremony held at the NDC, New Delhi on 15 Sep 18. The Hon’ble Lieutenant Governor of Delhi Shri. Anil Baijal graced the occasion and delivered the Valedictory address while awarding the parchments to the officers in the presence of Vice Admiral Srikant, Commandant, NDC and Prof. (Dr.) Utham Kumar Jamadhagni, HOD (DDSS) University of Madras. Vice Admiral Srikant, brought out that on completion of the NDC course, the graduates were confident to handle complex situations, and taking a broader view of the problem and arrive at logical decision with regards to National Security.

The Lieutenant Governor of Delhi Shri. Anil Baijal, in his address, congratulated the MPhil recipients and also exhorted them to further pursue their studies in National Security to become thinking scholar soldiers who can further India’s quest for comprehensive internal and external security. He appreciated the fact that the diverse fields and countries of the course participants would help in enriching their knowledge and understanding.

Casevac of Critically Injured from Kisthwar 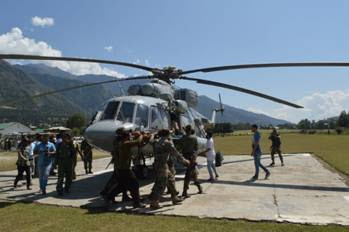 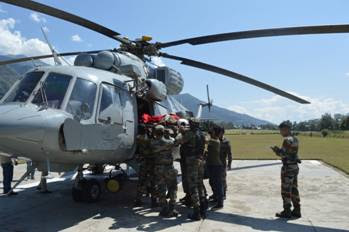 In the recent bus accident wherein a bus fell down in a gorge killing several people and critically injuring others near Kishtwar the Udhampur based Daring Dragons helicopter unit of Western Air Command provided yeoman service by evacuating eight critically injured persons to Jammu so that better medical care could be provided to them.

The unit was tasked with the mission at 1100 hrs as requested by the District Commissioner, upon which they launched a MLH class of Heptr for the rescue.The aircraft was piloted by Squadron Leader MK Singh with Flight Lieutenant Mudit as co-pilot. Eight critically injured people were airlifted from Kishtwar to Jammu where they were admitted to the civil hospital. Along with the injured eight attendants for the injured were also airlifted. 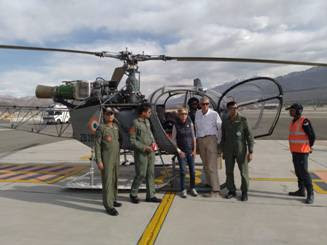 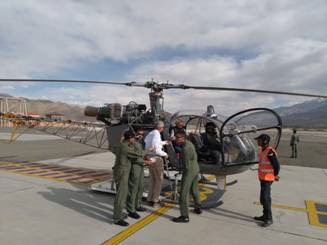 Barbara de Rham and Antoine, her husband, were on a holiday, trekking the hills of Ladakh in the Zanskar valley. Barbara developed acute symptoms of “altitude sickness” which required the immediate evacuation to a place with better medical facilities. The Embassy of Switzerland at Delhi requested for her evacuation to Leh at the earliest.

The Siachen Pioneers helicopter unit of Western Air Command were tasked with the mission, since this unit, not only was the closest but,also had pilots who are experienced in flying the treacherous Zanskar valley. The valley is known for its extremely turbulent weather, especially in the afternoons and is devoid of any suitable forced landing fields.The unit immediately launched two Cheetah helicopters at 1515 hrs. Two choppers were necessary due to the inhospitable terrain and the poor weather conditions in the general area of operations. Squadron Leader Sangram Patil led the mission and safely evacuated the lady and her husband to Leh Airforce station at 1615 hrs from where she was taken to the civil hospital.

“The lady displayed acute symptoms of dehydration when I checked her on landing. This could be a case of acute mountain sickness and it was best that she was evacuated to a better medical facility” said the senior medical officer of Airforce Station Leh, Sqn Ldr K Anurag, who attended to the patient on landing.

The Annual Day of Air Force Association began in the morning with the Wreath Laying Ceremony at Amar Jawan Jyoti at India Gate today in the memory of those who laid down their lives for the motherland. The wreath was placed by President of Air Force Association Veteran Air Chief Marshal Arup Raha PVSM AVSM VM. This was followed by Annual General Body Meeting held at Air Force Auditorium, Subroto Park, where-in some of the Air Force Nonagenarians and Octogenarians were honoured and were presented mementos by the Air Force Association, wishing them a healthy and long life. The Chief of the Air Staff Air Chief Marshal BS Dhanoa PVSM AVSM YSM VM ADC was the Chief Guest who addressed the gathering. Retired Chiefs of the Air Staff, very large number of Officers and airmen attended the Annual General Meeting.

Air Force Association is a welfare organisation in the non-governmental sector, actively involved in the welfare of air veterans and their families. The organisation is also deeply committed in alleviating the sufferings of the widows and the destitute children.

The Association was established on 15 Sep 1980 under the patronage of Marshal of the Air Force Arjan Singh DFC. It has nineteen branches spread all over the country. In addition, it has two branches in UK and Australia. It has more than 84015 Air Veteran members and 4324 Spouse members on its roll. The current President of the Association is Veteran Air Chief Marshal Arup Raha PVSM AVSM VM.

The raising day of the Air Force Association is celebrated on 15 Sep every year. It is an occasion when the valour and heroic deeds of gallant Air Force personnel, who had made supreme sacrifice in the past to defend our country, are remembered. The Annual Day also provides opportunities to the serving and the retired Air Force personnel to strengthen the bonds of comradeship, brotherhood and espirit-de-corps.

What's up, I want to subscribe for this website to get latest updates, therefore where can i do it please assist.