Exercise Aviaindra is an Air Force level exercise between India and the Russian Federation. First Aviaindra was conducted in 2014 and has been planned as a bi-annual exercise.

Exercise Aviaindra 18 is being conducted at Lipetsk, Russia from 17 Sep to 28 Sep 18 and will be conducted in Jodhpur, India from 10 Dec to 22 Dec 18. The Indian contingent for Ex Aviaindra departed for Russia on 15 Sep 18. The contingent comprises of 30 officers from different branches and streams of IAF including four women officers of Flying, Admin and Medical Branch. The aircraft that would participate in the exercise include Su-30 SM, Mig-29, Su-25, Mi-8 and An-26.

The aim of the exercise is focused towards anti-terrorist operations in a bi-lateral scenario. The exercise would further enhance the co-operation and understanding each other’s Concept of Operations. In addition to flying exercise, there would be formal interactions, discussions, exchange of ideas and friendly sports matches to enhance bonhomie between the two Air Forces.


Admiral Sunil Lanba, Chairman Chiefs of Staff Committee and the chief of the Naval Staff to visit 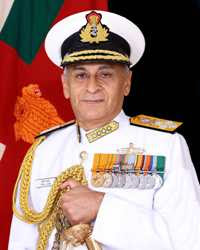 Admiral Sunil Lanba, Chairman Chiefs of Staff Committee and the Chief of the Naval Staff is visiting Rhode Island, USA on a bilateral visit from 18 to 22 September 2018 for attending the 23rd edition of the International Seapower Symposium (ISS) organised by the US Navy.

The Chairman Chiefs of Staff Committee and Chief of the Naval Staff is scheduled to present his views on the topic ‘Defending the Maritime Commons: Safeguarding the Free and International Order’ and participate in panel discussion during the symposium.

India and USA have traditionally maintained close and friendly relations. The Defence relationship between the two countries has been one of mutual trust and confidence, which translated into the US according major Defence partner status to India in June 2016. In addition, both countries have concluded certain major agreements, which include the Defence Framework Agreement, signed in 2015, which lays a blue print for collaboration between the defence establishments of both countries, the Logistics Exchange Memorandum of Agreement (LEMOA) signed in 2016, which is a foundational agreement, facilitating reciprocal logistics support between the Armed Forces of both countries and the more recent Communications Compatibility and Security Agreement (COMCASA) signed on 06 September 2018, that will facilitate information-sharing between the Armed Forces of both nations.

The Indian Navy engages with the US Navy on numerous issues, which include operational interactions such as the MALABAR and RIMPAC series of exercises, training exchanges, exchange of White Shipping Information and Subject Matter Expert exchanges in various fields, all of which are coordinated through the medium of Executive Steering Group (ESG) meetings conducted annually. In addition, warships from both navies regularly make port calls at each other’s ports.


DAC Approves Procurement of Equipment Worth Rs 9,100 Crores
The Defence Acquisition Council (DAC), chaired by Raksha Mantri Smt. Nirmala Sitharaman, met here today and accorded approval for the procurement of equipment for the Defence Forces valued at over Rs 9,100 crores.

Pursuing the goal of indigenisation and self-reliance, the DAC approved procurement of two Regiments of Akash Missile Systems under 'Buy (Indian)' category from M/s BDL. The Missile to be procured is an upgraded version of the previously inducted Akash missiles and will include seeker technology, possess 360 degree coverage and will be of compact configuration with reduced signature. The upgraded Akash Weapon System is operationally critical equipment which will provide protection to vital assets.

The DAC also accorded approval for progressing Design and Development of Individual Under Water Breathing Apparatus (IUWBA) for T 90 Tanks. Developed by DRDO Lab DEBEL, the IUWBA is used by the crew of Tanks as a safety gear and is required by the Tank crew for emergency escape when negotiating water obstacles while deep fording. The DAC also accorded approval for Design and Development of Test Equipment for Guided Weapons System of T 90 Tank. The equipment is being developed by DRDO and will give an indigenous solution to the Test Equipment used for checking the Guided Weapon System of Tank T 90. The equipment earlier procured from foreign OEMs, has been developed indigenously and is in pursuit of the Government’s 'Make in India' initiative.