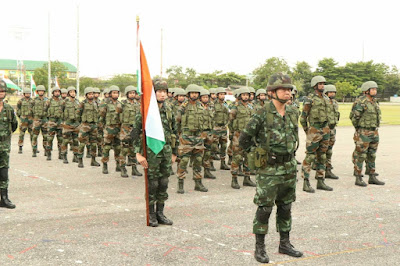 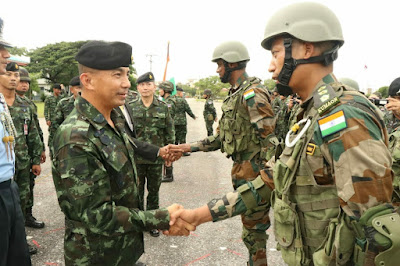 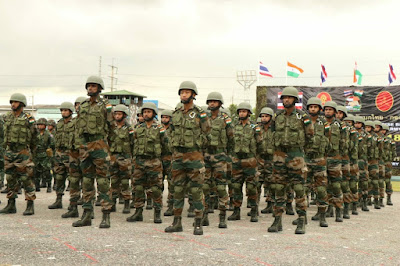 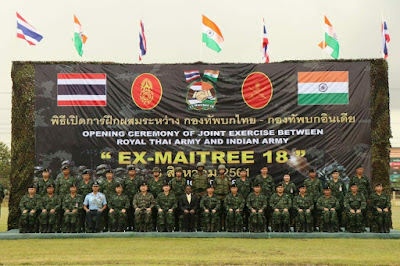 Exercise Maitree is a joint military exercise between Indian Army and Royal Thai Army which will be conducted from 06 to 19 August 2018 in Thailand. It is a platoon level exercise which comprises of infantry component. The opening ceremony started with familiarization of organisation and display of weapons & equipment of both armies.

The exercise will emphasize to hone the tactical and technical skills in joint counter insurgency and counter terrorist operations in rural and urban scenario under UN mandate. Due emphasis will be laid on increasing interoperability between forces from both countries which is crucial for success of any joint operation.  Both sides will jointly train, plan and execute a series of well developed tactical drills for neutralization of likely threats that may be encountered in urban warfare scenario.  Experts from both sides will also hold detailed discussions to share their experience on varied topics for mutual benefit.

Exercise Maitree will contribute immensely in developing mutual understanding and bonhomie between the two armies in order to counter terrorism.

In the Budget Speech 2018, Government has announced that it will bring out an industry friendly Defence Production Policy 2018 to promote domestic production by public sector, private sector and micro, small and medium enterprises (MSMEs). Consequent to this, a draft Defence Production Policy 2018 has been prepared which provides a focused, structured and significant thrust to development of defence design and production capabilities in the country. The draft policy has been shared with all concerned stakeholders for their views before notification.

The salient features of the Draft Policy which is already placed in public domain for consultation with stakeholders is as follows:

Creation of a dynamic, robust and competitive defence and aerospace industry as an important part of the ‘Make in India’ initiative.

Creation of a tiered defence industrial ecosystem in the country.

Reducing current dependence on imports and strive to achieve self-reliance in development and manufacture of weapon systems / platforms.

The Policy mandates for Transfer of Technology or enhanced Foreign Direct Investment (FDI) for domestic production in the event of non-availability of manufacturing capabilities in the country.

The policy envisages that Ordnance Factory Board (OFB) should focus on system integration, design and development, and actively engage domestic vendors in the private sector for other assembly work.

This information was given by Raksha Rajya Mantri Dr. Subhash Bhamre in a written reply to Shri Vivek K. Tankha in Rajya Sabha today.