HADR Operations by IAF in Kerala

Many parts of Kerala continue to be affected by landslides and floods. Indian Air Force responded immediately to the crisis in extending all possible assistance to the residents of Kerala through Humanitarian Assistance Disaster Relief (HADR) missions. Concerted efforts were made by IAF in rescuing stranded people from the flooded areas. Ladies, children, elderly people and residents were winched from the rooftops of submerged houses to safety by IAF helicopters. Till date, IAF has rescued 663 people. IAF helicopters have also dropped of food and water packets to the stranded people in the affected areas. Transport aircraft from all corners of the country have been flying day and night to ensure relief material is available in the relief camps.

Since yesterday, water has started receding from the flood affected districts. Today, IAF reduced the rescue effort and has increased the relief operations. Till date 974 T of relief material has been airlifted to Kerala state. Medical teams from Southern Air Command and Training Command have been deployed at various places to provide medical assistance. In addition, No 1 Rapid Action Medical Team (RAMT) has been airlifted from Command Hospital Air Force Bengaluru to Thiruvanathapuram to assist in the medical relief efforts to the residents of Kerala. RAMT has the capability to provide both medical and surgical emergency medical care. Additionally, 119 Doctors with 63 T of medicine and equipment has been airlifted to Kochi and Thiruvanathapuram for further positioning at various medical camps.

Prime Minister Modi appreciated the increased momentum of high-level contacts between India and China in all spheres, including in the areas of defence and military exchanges.

Terming India-China relations as a factor of stability in the world, the Prime Minister said that maintenance of peace and tranquility in the border areas is indicative of the sensitivity and maturity with which India and China handle their differences, not allowing them to become disputes.

The Ministers noted the fact that Prime Ministers of Japan and India emphasised the significance of defence and security cooperation in enhancing the strategic partnership between the two countries in September 2017, and exchanged views and ideas in a constructive and forward-looking manner. The Ministers shared the recognition that it is important for the two countries to further strengthen defence and security cooperation under the ‘Japan-lndia Special Strategic and Global Partnership’ that aligns Japan’s ‘Free and Open Indo-Pacific Strategy’ with India’s ‘Act East Policy’ to work together in achieving common objectives.

The Ministers recognised that the peace and stability of the Indian Ocean and the Pacific Ocean are crucial for ensuring the peace and prosperity of the Indo-Pacific region, and had a frank exchange of views on the current security situation in the Indo-Pacific region, including developments in the Korean Peninsula. The Ministers also welcomed the participation of the Japanese Chief of Staff, Joint Staff in the Raisina Dialogue, the flagship conference supported by the Government of India, as the first participation to the dialogue from the Defence Ministry of Japan.

The Ministers reaffirmed that they have shared interests in expanding cooperation in the maritime security domain and welcomed the fact that Japan Maritime Self-Defence Force (JMSDF) and the Indian Navy are working towards the signing of the Implementing Arrangement for Deeper Cooperation between the JMSDF and the Indian Navy. With the aim of deepening bilateral cooperation in this domain, the Ministers also reaffirmed their intention to pursue cooperation in engaging with countries of the Indo-Pacific, including through their capacity building.

The Ministers noted the regular interactions at all levels of their two defence establishments, and underlined their intention to seek more concrete and effective ground, maritime, and air cooperation and shared the views that they would promote cooperation and exchanges in the following areas:
Institutionalised Dialogue and Mutual Visits

Exchanges between the Japan Ground Self-Defence Force (JGSDF) and the Indian Army.

Minister Onodera commended the fact that Indian Army personnel participated as observers in the Japan-U.S. joint bilateral HADR exercise in November 2017 to share lessons learnt from natural disaster experiences.  From the perspective of reinforcing bilateral cooperation and exchanges, the Ministers also welcomed the progress made in preparing for the first-ever bilateral joint exercise in the domain of counter-terrorism between the JGSDF and the Indian Army to be held in the fall of 2018. They reaffirmed their intention to continue cooperation through conduct of exercises.
Exchanges between the Japan Maritime Self-Defence Force and the Indian Navy.

The Ministers expressed satisfaction at the success of Japan-India-U.S. Trilateral Maritime Exercise MALABAR 2018 in June 2018 as well as the start of the constructive, trilateral discussion toward the next round of the exercise.

The Ministers, noting the significance of bilateral training interactions, emphasised the unprecedented frequency at which JMSDF and the Indian Navy conducted port calls and joint exercises since the last Defence Ministerial Meeting, showing progress in bilateral training cooperation. The Ministers shared the view that they would pursue continuation and sophistication of bilateral joint exercises, including those in areas of anti-submarine warfare and mine-countermeasures.

The Ministers welcomed the steady expansion of exchanges involving various subject matter experts in the air component, including Japan Air Self-Defence Force (JASDF) helicopter crews’ visit to India’s Sarsawa Air Force Station in December 2017. They affirmed JASDF’s participation as observers in the next round of Exercise Cope India to add further momentum to air-to-air exchanges, given the success of the 2nd Air Staff Talks in June 2018. They also expressed their intention to seek further opportunities for air-to-air cooperation through visits of Japanese and Indian air assets to each other’s air bases.

The Ministers welcomed the regular exchange of students between the defence educational and research institutions of the two countries, including the National Defence College of India, and the National Institute of Defence Studies of Japan, and reaffirmed that they would continue to do so.
Cooperation in Defence Equipment and Technology

The Ministers praised various efforts made in the field of bilateral cooperation in defence equipment and technology during the past year, including the progress made in the bilateral discussion of the 4th Joint Working Group on Defence Equipment and Technology Cooperation (JWG-DETC) in Delhi in July 2018 for identifying specific areas of cooperation. The Ministers also noted the effort made by both countries regarding the cooperation on US-2 amphibious aircraft.

The Ministers welcomed the fact that constructive engagement between the Acquisition, Technology and Logistical Agency (ATLA) of Japan and the Defence Research and Development Organisation (DRDO) of India has resulted in the signing of a project arrangement between the Ministry of Defence of the Republic of India and the Ministry of Defence of Japan concerning the Cooperative Research in the Area of Unmanned Ground Vehicle (UGV) /Robotics, marking the start of the first bilateral cooperative project.

The Ministers noted the efforts by relevant authorities of Japan and India in organising the visit of Japanese defence enterprises to Indian defence industries in August 2018 in order to follow up on the first-ever Japan-India Defence Industry Forum in September 2017, and to promote the interaction between public and private sectors, as well as between Japanese and Indian defence industries. The Ministers commended that such efforts contribute to the deepening of mutual understanding between the defence industries of the two countries and to the prospect of future bilateral projects.

The Ministers recognised the importance of promoting defence equipment and technology cooperation through a joint effort between the public and private sectors in order to bilaterally strengthen technological capability and industrial infrastructure and shared the view that they would further develop defence equipment and technology cooperation between the two countries.

Defence Minister of Japan calls on the Prime Minister

Mr. Itsunori Onodera, Defence Minister of Japan, called on Prime Minister Narendra Modi today.
Prime Minister Modi recalled his long association with Japan, since before assuming office as Prime Minister, and welcomed the broadening and deepening of the Special Strategic and Global Partnership between India and Japan in recent years. 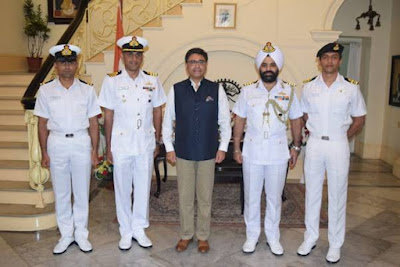 INS Khanjar a Missile Corvette of Indian Navy was on a three-day visit to Yangon, Myanmar to undertake operational turn around (OTR) and as part of goodwill visit from 18 to 20 Aug 18. On arrival at Yangon, the Commanding Officer called-on Captain Tet Lwin Run, Fleet Commander 1st Fleet and the Indian Ambassador to Myanmar Shri Vikram Misri.  A joint Yoga Session for IN and Myanmar Naval personnel was also organised in addition to the cross visits between Indian Navy and Myanmar Naval personnel.