DGMO level talks at behest of Pakistan DGMO was held on 16 August 18. Pleasantries were exchanged between the DGsMO on the occasion of Independence Day of both countries. Pakistan DGMO expressed satisfaction on the measures being taken along the Line of Control by troops to maintain peace and tranquility. The quantum of cease fire violations has drastically reduced and augers well for the future.

Pakistan DGMO made an assurance that Pakistan Army would take prompt actions against move of inimical elements in proximity to the Line of Control and respond to information shared by the Indian side thereby facilitating conduct of anti-terrorist operations.

Indian DGMO emphatically stated that infiltration attempts by terrorists were a major cause of concern. He also informed the Pakistan DGMO that ‘these activities have increased in the areas North of Pir Panjal Mountain Ranges. Pakistan must institute measures to prevent infiltration from the launch pads located on its side of the Line of Control’.

Indian DGMO assured that the Indian Army will abide by its commitment to uphold the Ceasefire Understanding of 2003 provided Pakistan Army initiates positive steps to control infiltration and abetment of terrorism in J&K. 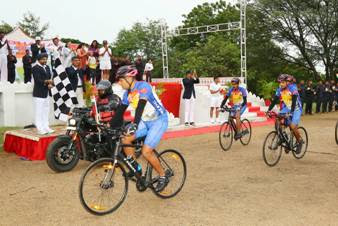 The Corps of Electronics and Mechanical Engineers of Indian Army is undertaking an Ultra Cycling Expedition, as part of celebration for its Platinum Jubilee. The Expedition was flagged off on 15 August 2018 on the occasion of Independence Day from MCEME Secunderabad.

The team will cover a distance of 25000 km within 120 days and pass through all the states. The expedition will be completed in three phases. In first phase the team will cover Secunderabad to Leh and Leh to Kanyakumari. In second phase, Kanyakumari to Tezu and then Tezu to Koteshwar. And finally in third phase the team will cover Koteshwar to Delhi and thus complete Golden Quadrilateral.
The team will attempt Guinness World Record for longest distance cycling in a single country, Guinness World Record for fastest Golden Quadrilateral route by cycle, Limca Book of Records for Fastest North-South Cycling and Limca Book of Records for Fastest East West Cycling.

When someone writes an article he/she maintains the image of a user
in his/her mind that how a user can be aware of it. So that's why this post is great.
Thanks!