Ex Pitch Black a biennial multi-national large force employment warfare exercise was hosted by Royal Australian Air Force (RAAF) from 24 Jul 18 to 18 Aug 18 in Darwin, Australia. Indian Air Force had earlier participated in the exercise as observers and this was for the first time that IAF participated with air assets in the Exercise Pitch Black (PB-18). With participation of 16 nations and more than 140 aircraft, the current edition was the largest Pitch Black ever conducted by Australia. IAF contingent consisted of 145 air-warriors including IAF Commandos team, Garuds, 04 X Su-30 MKI, 01 X C-130 and 01 X C-17 for logistic support for induction and de-induction. The contingent assembled at Air Force Station Kalaikunda and departed for the exercise on 19 Jul 18 from India to Australia via Indonesia. The contingent was led by Group Captain CUV Rao.

The objectives for the exercise were to foster closer relationship between the participating friendly forces and to promote interoperability through exchange of knowledge and experience. The aim for participating crew and specialist observers was to expose them to op environment in international scenarios. The exercise comprised of 2 phases, first being the Force Integration week. During the Force Integration week, the forces flew basic missions with an aim to get to same working platform. Subsequently the missions involved larger packages & we undertook simulated air combat exercises in near realistic environment and exchanged best practices towards enhancing our operational capability.
Various day and night operations were undertaken by the IAF and for the first time. SU-30MKI carried out Air to Air Refueling with KC-30A of RAAF. The KC-30A Multi Role Tanker Transport is a modified Airbus A330 airliner that is used by RAAF to conduct air-to-air refueling and provide strategic airlift. Some highlights of the exercise included exchange sorties flown by IAF pilots flying in Rafale & RAAF F/A-18 (Hornets) and RAAF crew & French Crew flying in SU-30MKI. IAF C-130J crew got a unique opportunity to fly in RAAF C130J aircraft. C-130J also carried out assault landing at Dalmare, Assault Operations of dropping specialist vehicles in Op area and participation in Large Force Engagement missions, both by day and night. Certain maiden operations undertaken by the IAF during the exercise included IAF Commandos, Garuds and Para Jump Instructors jumping from C-27J Spartan in a foreign country, Container Delivery System (CDS) drop by C-130 J, Engine Running Ops (ERO) for dropping Ops Specialist Vehicles in Combat Zone. During the exercise, IAF maintenance crew ensured 100% serviceability of all the assets, thus ensuring complete participation of the forces in the exercise.

The exercise provided a unique opportunity for exchange of knowledge and experience with the participating nations in a dynamic warfare environment. The IAF contingent interacted with various countries, gained first-hand experience of training patterns, employment and operating philosophies of their combat assets.

Participation in a multinational air exercise assumes importance in view of the continued engagement of the IAF with friendly foreign countries. Over the last decade, IAF has been actively participating in operational exercises hosted by various countries, wherein collaborative engagements have been undertaken with the best air forces in the world. It was a unique, fascinating, desirable and timeless learning at the exercise for the IAF contingent.

The professionalism and work ethos of IAF Pilots, technicians, Airmen and all participating Air-Warriors earned praises from all quarters. The Operational lessons learnt by IAF during the exercise will assist IAF in adding more teeth to its overall war waging capabilities and assist us in better joint man ship with the friendly Nations. IAF has de-inducted from Darwin, Australia and has reached Malaysia on its return journey to India.

Indigenously designed and developed guided bombs Smart Anti Airfield Weapon (SAAW) were successfully flight tested from IAF aircraft at Chandan  range.  The weapon system was integrated with live warhead and has destroyed the targets with high precision. The telemetry and tracking systems captured all the mission events. This weapon is capable of destroying variety of ground targets using precision navigation. A total of three tests with different release conditions were conducted during 16 to 18 August 2018 and all the mission objectives have been achieved.
The weapon has undergone eight developmental trials till date and performance of system for different ranges under multiple launch conditions has been demonstrated. Senior officials from DRDO, HAL and Indian Air Force participated and witnessed the flight tests.

Raksha  Mantri  Smt  Nirmala  Sitharaman  congratulated  the DRDO, IAF and HAL on the successful flight tests for further boosting the defence capabilities of the country.

Indigenously developed Helicopter launched Anti-Tank Guided Missile ‘HELINA’ has been successfully flight tested from Army Helicopter at 1400hrs in the ranges of Pokhran, today. The weapon system has been tested for its full range.The ‘HELINA’ weapon system released smoothly from the launch platform has tracked the target all through its course and hit the target with high precision. Allthe parameters have been monitored by the telemetry stations, tracking systems and the Helicopters.

The Missile is guided by an Infrared Imaging Seeker (IIR) operating in the Lock on Before Launch mode. It is one of the most advanced Anti-Tank Weapons in the world. Senior officials from DRDO and Indian Army were present during the mission.

Raksha  Mantri  Smt  Nirmala  Sitharaman  congratulated  the DRDO  and  the Indian Army on the successful flight test for further strengthening the defence capabilities of the country. 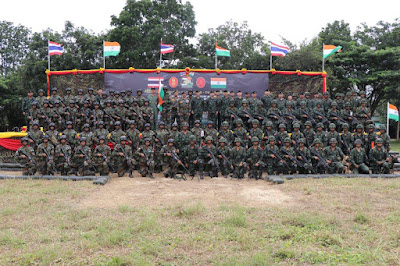 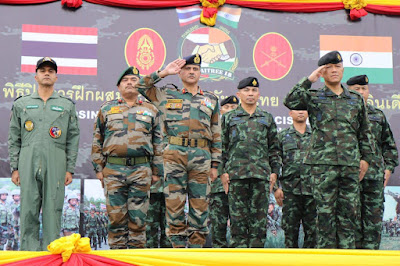 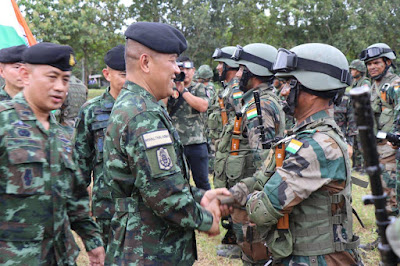 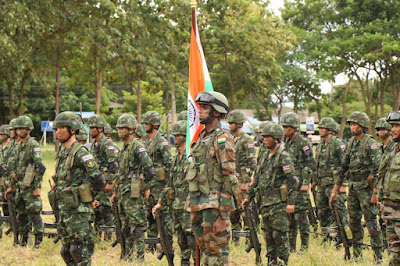 Both the armies immensely benefitted from each other’s expertise and experience in conduct of tactical level counter terrorist operations. The exercise helped in enhancing the cooperation between two armies & bonhomie between troops.

Flood Relief Operation by Indian Army in Kerala
Indian Army is deeply involved in the Rescue & Relief operations in Kerala which is witnessing very heavy rains since 09 August 2018. Request for provision of Army assistance was received on 09 August 2018. Accordingly, Indian Army carried out execution of Disaster Relief tasks on a war footing which has been greatly appreciated by civilian populace and the State administration.
As on date total of 10 flood relief columns, each having an approximate strength of 65 personnels are carrying out rescue operations in ten districts of Kerala. The details of flood relief columns are as under:-


In addition to the 10 flood relief columns, 10 Engineer Task Forces (ETF) each having an approximate strength of 40 personnels from Jodhpur, Bhopal, Pune, Bangalore and Secunderabad have been pressed into action. Army is also utilising 53 military boats to evacuate civilians from flood affected areas. The details of ETF are as under:-


Inspite of continuous and heavy rains, Indian Army columns are working round the clock to restore connectivity to remote villages by constructing temporary foot bridges, bunds and preparing alternate routes. 13 temporary bridges were constructed to reconnect 38 remote areas and total of 3627 personnels have been rescued till date, which include 22 foreign nationals.


Relief materials have been sent to 19 villages with medical aid being provided to approximately 500 civilians till date. In addition 3000 pre-cooked meals and 300 life jackets have been handed over to civil administration on 17 Aug 2018.


Casevac of French National from Leh 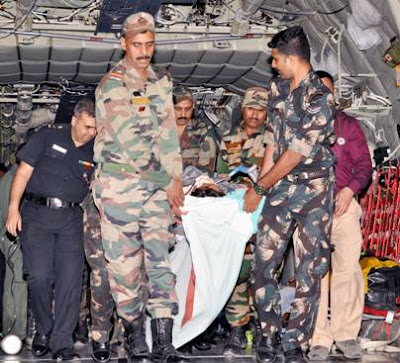 Bresson Florence and her husband Christophe were on a road trip at Leh, on motorcycles when, in an accident the 50 year old French national lady was seriously injured. She was immediately taken to an army hospital nearby and then shifted to SNM hospital at Leh where she was shifted to the ICU. Her condition was critical. Christophe suffered minor injuries.

The Embassy of France at New Delhi,placed an immediate request to evacuate the patient to Chandigarh or Delhi, for further medical care. Accordingly a C-17 Globemaster aircraft was prepared for launch with at Patient Transfer unit, a mobile ICU in itself, and enroute medicare personnel. Unfortunately the weather at Leh in the afternoon hours on 16 Aug 18 did not permit the aircraft to land.

Early morning today, a C-17 aircraft, on a routine sortie, from Chandigarh landed at Leh with the Patient Transfer Unit, to which Brensson was transferred. Simultaneously a C-130 Hercules aircraft launched from Hindon reached Leh and took off with the patient accompanied by her husband and other medicare personnel.

The evacuation of the casualtywas successfully completed at 0925 hrs when the C-130 ac landed at Palam with the patient. She was then transferred to a specialised hospital at New Delhi.

“It was an apprehensive moment for us when due weather we could not launch the aircraft last evening. Our medical fraternity was in constant touch with the doctors at Leh and at the first opportune moment both the aircraft were launched and mission executed successfully”, said the Air Officer Commanding Airforce Station Chandigarh, Air Cmde S Srinivasan AVSM VSM.