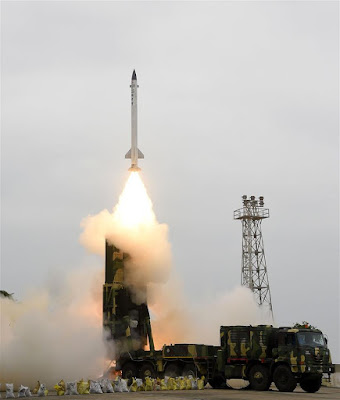 DRDO conducted the successful test of the Ballistic Missile Interceptor Advanced Area Defence (AAD from Abdul Kalam Island, Odisha. The endo-atmospheric missile, capable of intercepting incoming targets at an altitude of 15 to 25 kms was launched against multiple simulated targets of 1500 km class ballistic missile. One target among simultaneously incoming multiple targets was selected on real time, the weapon system radars tracked the target and the missile locked on to it and intercepted the target with a high degree of accuracy. The complete event including the engagement and interception was tracked by a number of electro-optical tracking systems, radars and telemetry stations. All the mission objectives were successfully met.

Chief of the Air Staff, Air Chief Marshal BS Dhanoa, witnessed the flight test along with other senior officials.

The Raksha Mantri Smt Nirmala Sitharaman congratulated DRDO on the successful flight test for further boosting the defence capabilities of the country.

‘Make in India’ in defence sector, which is primarily driven by capital acquisition of defence equipment and other policy measures, has been introduced in all major areas of defence such as combat vehicles, combat aircrafts, warships, weapons, ammunitions, missiles, radars, electronic warfare systems etc.

Defence Research & Development Organisation (DRDO), the Research wing of Ministry of Defence has been set up with a mandate of developing cutting edge technologies and systems for Indian Armed Forces as per their speciﬁc Qualitative Requirements. The list of products developed by DRDO during the last three years areas follow:-

In the last three ﬁnancial years (2015-16 to 2017-18), 58 contracts worth about Rs 1,17,656 Crore were signed with foreign vendors for procurement of defence capital equipment for Defence Forces.

At present, there is no proposal to close Ordnance Factories or Defence Public Sector Units functioning under the administrative control of Department of Defence Production.

This information was given by Raksha Rajya Mantri Dr. Subhash Bhamre in a written reply to Shri Mohd. Salim and Shri Md. Badaruddoza Khan in Lok Sabha.