The two day Unified Commanders’ Conference for the year 2018 commenced on 30 Jul 18 at New Delhi.  The Conference provided a platform for discussions at the Apex Level on all ‘Joint Issues’ amongst the three Services & Ministry of Defence and enabled stock taking of the previous year and facilitated planning for future.

Raksha Mantri complemented the Services for their performance and achievements in past year and stressed on the need for greater synergy and jointmanship amongst the Services as well as between the Services and the MoD. She assured the Services that preparedness of the Services would be a top priority for the Government.

During the conference, under the chairmanship of the Chief of Integrated Staff (CISC), a large number of Tri Services issues were deliberated thoroughly and solutions to contemporary challenges were provided to facilitate future plans for an integrated robust defence preparedness.

Curtain Raiser : The two day Unified Commanders’ Conference (UCC) for the year 2018 will be held on 30th & 31st Jul 2018 at New Delhi.  The Annual Conference provides a platform for discussions at the Apex Level on all ‘Joint Issues’ amongst the three Services & Ministry of Defence and enables stock taking of the previous year and planning the way ahead for the next year.

The Conference will be conducted under the tutelage of Headquarters Integrated Defence Staff (HQ IDS) and will be attended by the Raksha Mantri, Rajya Raksha Mantri, National Security Advisor, the Chiefs of Army, Navy & Air Force and other Senior Military and Civil Officials of the Ministry of Defence and Tri-Service Organisations/Institutions.

The scope of this conference has been enhanced this year to enable the forum to facilitate joint stock taking of the previous year’s performance of all Services & Departments of Ministry of Defence and jointly chart the course for the next year.  The forum will feature addresses by the Raksha Mantri, the Services Chiefs, Chief of the Integrated Defence Staff, Commander-in-Chief of Andaman & Nicobar Command, Defence Secretary and all Heads of Departments of MoD.

During the conference, under the chairmanship of the Chief of Integrated Staff (CISC), a large number of Tri Services issues would be deliberated thoroughly to arrive at solution to challenges faced and to evolve plans for the future. 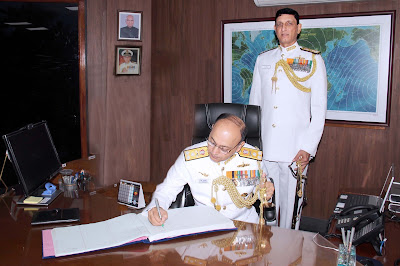 Vice Admiral Anil Kumar Chawla, AVSM, NM, VSM, has taken over the reins of the Southern Naval Command (SNC) as its 28th Flag Officer Commanding- in-Chief on 31 Jul 18. The Admiral has replaced Vice Admiral AR Karve, PVSM, AVSM who retired after 38 years of yeoman service. VAdm AK Chawla was previously the Chief of Personnel at the Integrated Headquarters of Ministry of Defence, Navy at Delhi. The Flag Officer, a native of Dehradun, had arrived in Kochi on 30 Jul 18.

A static ceremonial parade, consisting of 16 platoons including 4 armed platoons and a 50 men “Guard of Honour” was held at the naval base on the occasion in which both the admirals were accorded General Salutes and which concluded with a “March in Review Order”. Subsequently, both Flag Officers carried out the formal handing / taking over in the office of the Flag Officer Commanding-in-Chief. Speaking to the members of the media, prior to his departure, VAdm Karve expressed satisfaction at the synergy achieved by the Command with the civil administration of the state in responding to different “Humanitarian Assistance and Disaster Relief (HADR)” requirements.

On completion of the handing over, VAdm Karve met and was bid farewell by various Heads of Units, Commanding Officers, Chief Staff Officers of headquarters,SNC and other senior officers. As he drove away, he was given the traditional 'Teen Jais' by officers and sailors of the Command.
Strategic Partnership Model approved by DAC

In continuation of its efforts to boost indigenous defence industry and to reduce timelines so as to ensure timely delivery of equipment to the Armed Forces, the DAC discussed and approved Implementation guidelines for the Strategic Partnership Model. Strategic  Partnership Model  aims to  revitalise defence industrial ecosystem and progressively build indigenous capabilities in the private sector to design, develop and manufacture complex weapon systems for the future needs of the Armed Forces. The amplifying guidelines lay emphasis on incentivisation of transfer of niche technology and higher indigenous content Global Majors, who in collaboration with Indian Partners are ready to make India a Regional / Global manufacturing hub for the platform will also be incentivized. This will give a major fillip towards encouraging self-reliance and aligning the defence sector with the 'Make in India ' initiative of the Government. In an endeavour to convert policy into implementable directions and to kick start the process, the DAC also approved platform specific guidelines for procurement of Naval Utility Helicopters. Allprocurements under the SP Model would be executedby specially constituted Empowered Project Committees (EPC) to provide focussed attention and ensure timely execution.

The DAC also accorded approval for the acquisition of 08 Fast Patrol Vessels (FPVs) for the Indian Coast Guard under 'Buy (lndian-lDDM)' category at an approximate cost of Rs 800 crore. These vessels will be indigenously designed and manufactured and would strengthen maritime security by undertaking day/night patrolling and policing of  the Maritime  Zones of India including interception of vessels and personnel engaged in anti-sabotage anti-terrorist, anti-smuggling operations as well as provide assistance for Search and Rescue medical evacuation, disaster relief operations, assistance during pollution response operations, etc..

Progress in Production of Tejas Aircraft

Out of total 20 IOC aircraft (16 fighters and 4 trainers), 9 fighters have been delivered by HAL to IAF till date.  The production of remaining 11 IOC aircraft             (7 fighter + 4 trainer) are taken up at HAL.  The aircraft is currently capable of undertaking Air Defence Operations and conventional ground attack with heavy bombs is feasible.

Production for 20 FOC aircraft, will be taken up after FOC clearance by Aeronautical Development Agency (ADA) for which current target is December, 2018.

In order to fast track the production of Light Combat Aircraft (LCA) Tejas and to achieve FOC clearance given by ADA, the following initiatives have been taken:-
•
For ramping up production capacity from existing 8 aircraft to 16 aircraft per annum, Government of India (GoI) has sanctioned Rs.1381.04 Crore in March, 2017.
•

Enhancing production rate of LCA Tejas primarily through outsourcing of major modules to private partners with HAL moving to the role of lead integrator.
•

Establishment of second line for structural and equipping activities at Aircraft Division, HAL.
•

Besides, 40 aircraft (20 IOC & 20 FOC), Defence Acquisition Council (DAC) has cleared acquisition of 83 LCA Mk1A for IAF for which quotation has been submitted by HAL.

Further, in order to bolster the fighter squadron strength, Government of India has also planned to manufacture fighter aircraft through Strategic Partnership model.

This information was given by Raksha Rajya Mantri Dr. Subhash Bhamre in a written reply to Dr. Banda Prakash in Rajya Sabha today.

The following 04 segments (major platforms) have been identified under Strategic Partnership (SP) Model:  Fighter Aircrafts, Helicopters, Submarines and Armoured Fighting Vehicles / Main Battle Tanks.  Since promulgation of the SP policy, Requests for Information (RFIs) have been issued for all four segments – Naval Utility Helicopter (NUH), Submarines, Fighter Aircraft, and Armoured Fighting Vehicles (AFV) / Main Battle Tanks (MBT).  The evaluation of responses to the RFIs for NUH, Submarines and Fighter Aircraft has already been initiated.  Evaluation of RFI response for AFV / MBT will be undertaken on receipt.  Hence, there is no delay in operationalising the SP model.
This information was given by Raksha Rajya Mantri Dr. Subhash Bhamre in a written reply to Shri Manish Gupta in Rajya Sabha today.

Make in India’ in defence sector, is primarily driven by capital acquisition of defence equipment and other policy measures.  In the last four financial years i.e. from 2014-15 to 2017-18, Government has accorded Acceptance of Necessity (AoN) to 151 proposals, worth Rs.2,66,700 Crore approximately under ‘Buy (Indian-IDDM)’, ‘Buy (Indian)’, ‘Buy and Make (Indian)’ or ‘Make’ categories of capital procurement as per Defence Procurement Procedure (DPP), which means Request for Proposal (RFP) shall be issued only to Indian Vendors.

DPP stipulates a time schedule for completion of the procurement cycle.  The time taken to undertake capital procurement of defence equipment depends on the nature and complexity of the equipment being procured.  Nonetheless, under the DPP-2016 Government has laid down further provisions for ensuring swift decision making in defence procurements.  In addition, all the procurement schemes are regularly reviewed and prioritized on the basis of critical operational needs of the Armed Forces.

In the Budget Speech 2018, Government has announced that it will bring out an industry friendly Defence Production Policy-2018 to promote domestic production by public sector, private sector and micro, small and medium enterprises (MSMEs).  A draft Defence Production Policy-2018 has been prepared which provides a focused, structured and significant thrust to development of defence design and production capabilities in the country.  The draft policy has been shared with all concerned stakeholders for their views before its approval and final notification.

This information was given by Raksha Rajya Mantri Dr. Subhash Bhamre in a written reply to Shri Manish Gupta in Rajya Sabha today.

Production OF Defence Equipments
Capital procurement of defence equipment is undertaken from various domestic as well as foreign vendors, based on operational requirements of the Armed Forces, the availability or capacity to produce the equipment in India and abroad and to keep the Armed Forces in a state of readiness to meet the entire spectrum of security challenges.

During the last three years and current year (upto June, 2018) out of total 168 contracts, 106 contracts have been signed with Indian vendors for procurement of defence equipment for Armed Forces such as Helicopters, Radar, Ballistic Helmets, Artillery Guns, Simulators, Missiles, Bullet Proof Jackets, Electronic Fuzes and ammunition.

Government is pursuing initiatives to achieve higher levels of indigenization and self-reliance in the defence sector by harnessing the capabilities of the public and private sector industries in the countries.  These measures include according priority and preference to procurement from Indian vendors and liberalization of the licensing regime.  DPP accords the highest priority to Buy Indian (Designed, Developed and Manufactured) (IDDM).  The ‘Make’ procedure has been simplified with provisions for earmarking projects not exceeding development cost of Rs.10 crores (government funded) and     Rs.3 crores (Industry funded) for micro, small and medium enterprises (MSMEs); and with provisions for involving private industry as production agencies and technology transfer partners. Government has also promulgated the policy on Strategic Partnership in the Defence Sector to encourage broader participation of the private sector in manufacture of major defence platforms and equipment.

This information was given by Raksha Rajya Mantri Dr. Subhash Bhamre in a written reply to Shri Narayan Rane in Rajya Sabha today.