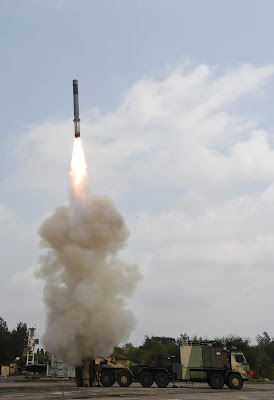 BrahMos, the supersonic cruise missile was successfully test-fired at 1017 hrs today, from the Integrated Test Range (ITR) at Balasore, Odisha. The test-firing conducted from a Mobile Autonomous Launcher was part of service life extension programme for Indian Army under extreme weather condition.

The precision strike missile followed the designated trajectory and the key components functioned perfectly. BrahMos has proved again all-weather capability flying in sea-state 7 with waves as high as 9 meters. DRDO's range capability to operate in the most severe weather condition has also been validated at ITR Balasore. Senior Army officials and scientists from DRDO and BrahMos witnessed the trial.

BrahMos is a joint venture between DRDO of India and NPOM of Russia.  BrahMos missile has established itself as a major force multiplier in modern-day complex battlefields with its impeccable land-attack, anti-ship capabilities with multi-role and multi-platform abilities. 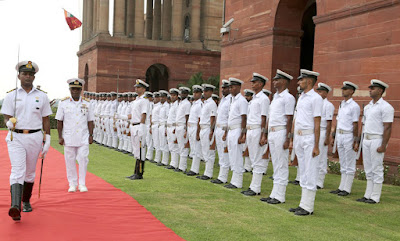 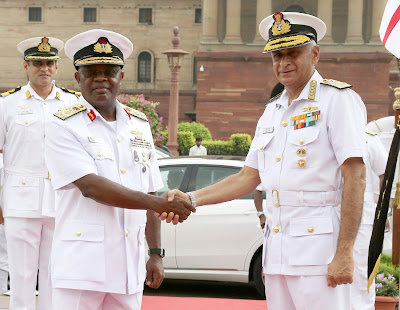 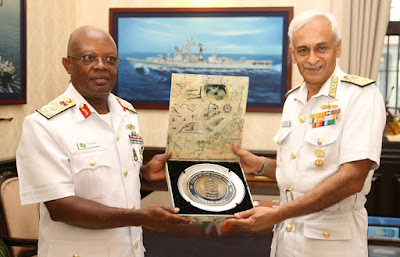 Vice Admiral Ibok-Ete Ekwe Ibas, Chief of the Naval Staff, Nigerian Navy is visiting India from 16 to 19 July 2018 along with a four member Nigerian Navy delegation. The visit aims to consolidate bilateral naval relations between India and Nigeria, as also to explore new avenues for naval cooperation.

India is the largest trading partner of Nigeria and Nigeria is India’s the largest trading partner in Africa. Indian Navy through the medium of Joint Defence Cooperation Committee meetings cooperates with the Nigerian Navy on many fronts which include training, exchange of Subject Matter Experts in various fields and   Hydrographic Cooperation. In addition, port calls by Indian Naval Ships, latest one being INS Tarkash in June 2017 have further strengthened the Defence cooperation with Nigeria.

After New Delhi, the Admiral is scheduled to proceed to Mumbai, Kochi and Goa where he will hold discussions with the Commanders-in-Chief of Western and Southern Naval Commands and Flag Officer Goa Area respectively. The Admiral is also scheduled to visit various naval units, including Indian Naval training schools during his visit to Mumbai, Kochi and Goa. Shipbuilding issues would be pursued during the Nigerian Admiral’s visit to M/s Mazagon Dock Shipbuilders Limited and M/s Goa Shipyard Limited at Mumbai and Goa respectively.

Bharat Dynamics Limited (BDL), a Government of India Enterprise under Ministry of Defence has bagged an export order worth USD 14.33 Million for export of Light Weight Torpedoes to a friendly country. With this, the Company has achieved sixty-five percent of export target set for the financial year 2018 – 19.

BDL has a dedicated Unit at Visakhapatnam exclusively for manufacture of underwater weapons where the export order will be executed. BDL is expanding its footprint globally by offering Akash Weapon System, Anti-Tank Guided Missiles, Torpedoes and Counter Measure Dispensing System to friendly foreign countries. 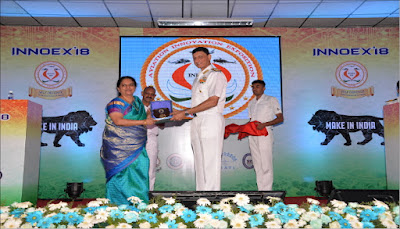 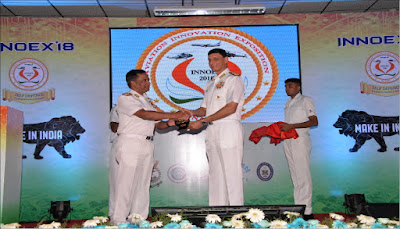 On first day of the workshop, which preceded the expo inauguration, renowned aerospace professionals and academicians, including Dr CG Krishnadas Nair, Padmashri, President SIATI, Dr RK Tyagi, President AeSI, Dr Tessy Thomas, DG (Aero) of DRDO, and Prof SS Mantha, from National Institute of Advance Studies (NIAS) shared their experiences with the young aeronautical professionals of SNC. Speaking on the occasion, Vice Admiral AR Karve, while welcoming the delegates, informed all the existing and potential industry partners about the expected growth of the naval aircraft fleet from 150 to 450 in the near future and the huge opportunity it provides to the industry particularly the Micro, Small and Medium Enterprises (MSME). He expressed hope that the opportunity provided by the expo would help the naval aviation and the industry to understand each other better so as to move towards a more capable indigenous aviation industrial ecosystem.

The exposition, which included about 20 stalls from 18 firms was able to bring together seven major indigenous aviation stakeholders, viz., the Indian Air Force, ISRO, Aero Cluster Labs of DRDO, Air India, Pawan Hans Limited, as well as members of the academia and industry. An arrangement was also made for MSME to interact and showcase their product line and capabilities to the end users. The aim was for all the stakeholders to pool in their collective resources and expertise for co-operative production. The exposition also displayed actual obsolete items and systems for Captains of MSMEs to identify indigenous substitutes, promote indigenisation and provide product support.