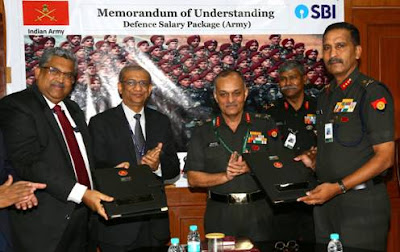 A Memorandum of Understanding (MoU) was signed between the Indian Army and SBI on the Defence Salary Package on 12 July 2018. The signing-in ceremony was chaired by the Adjutant General Lt Gen Ashwani Kumar and was attended by top officials of SBI headed by Shri PK Gupta, Managing Director (Retail and Development Banking), SBI.

The first MoU between SBI and the Indian Army was signed in 2011 and was renewed on 23 Feb 2015. The revised MoU is tailor made to suit the requirements of serving soldiers, pensioners and families. A number of additional facilities have been incorporated in the revised MoU which include free personal accident death cover, free permanent total disablement cover and other accidental benefits to the deceased soldier and family. This MoU will benefit a large number of serving and retired Army personnel who are having their accounts with SBI. The MoU will be valid till 03 Jan 2019 and continuation thereafter will be subject to review/renewal. 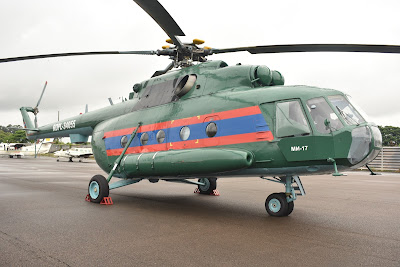 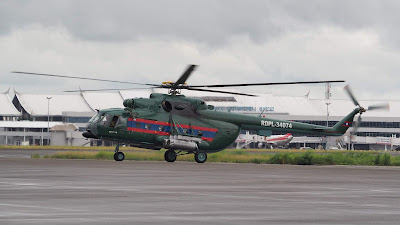 During their business trip to Laos, the delegation from Russian Helicopters Holding Company (part of Rostec State Corporation) conducted negotiations with the executives of the Lao Ministry of Defense regarding further cooperation in after-sales support of the previously supplied helicopters.

During the negotiations, the Lao party expressed their interest in the timely restoration of the airworthiness of three Mi-17V-5 helicopters, the TBO of which expires in 2019. Moreover, the parties discussed the possibility of repairing Ka-32 helicopters, which are also in service with the Lao Air Force.

The official ceremony had taken place earlier at the air base in Vientiane dedicated to the transfer of four Mi-17 helicopters repaired by the mobile group of specialists of JSC "356 ARP" to the Lao Ministry of Defense. The event was attended by Lao Deputy of Minister of Defence, Phouvong Vongphom.

"The Asia-Pacific Region is a priority market for the Holding Company in the area of after-sales services. As of today, the APR uses over 500 helicopters produced in Russia and in the Soviet Union. We are ready to offer to all our partners, including our colleagues from Laos, the best solutions for repairing and upgrading their current fleet of helicopters," noted Sergey Gusev, Director for After-Sales Services of Russian Helicopters.

Another priority area for cooperation in the Asia-Pacific Region, he added, is the consistent work aimed at explaining the consequences of performing repair activities at non-certified repair bases of third countries, since many helicopter operators only go by price parameters, when concluding contracts for the supply of spare parts and components, ignoring international quality standards.

To prevent the use of counterfeited products, the Holding Company is working on introducing identification markings on the aviation inventory at the manufacturing stage. The products will be automatically registered in the system for tracking the movement of the components and spare parts along the product supply networks and in operation.

Russian Helicopters Holding Company (part of Rostec State Corporation) fulfilled the first service contract in the interests of the Lao Ministry of Defense, having transferred a batch of four Mi-17 helicopters at the official ceremony. The helicopters were repaired by a mobile group of specialists of JSC “356 ARP”, which is part of the Holding Company. 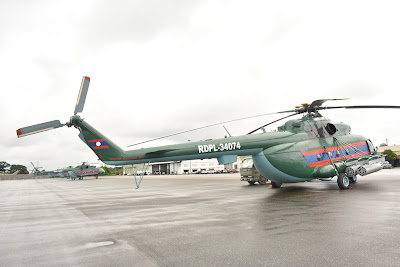 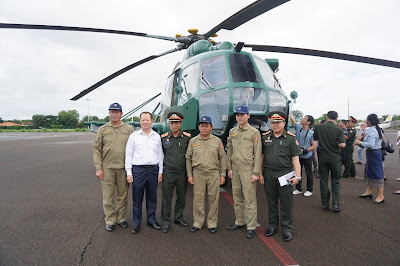 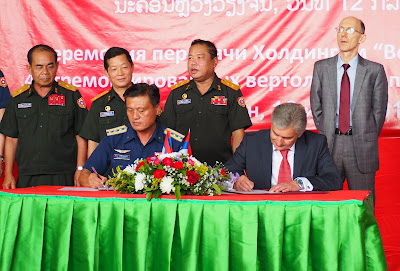 The transfer ceremony took place at the air base in Vientiane. The Lao Deputy of Minister of Defence, Phouvong Vongphom inspected the repaired Mi-17 helicopters. During the official event, a crew of the Lao Air Force performed a demonstration flight in a repaired helicopter.

"The Holding Company is always ready to offer the most comfortable conditions for its customers in terms of both supplying helicopters and rendering after-sales services. Upon the request of the Lao party, we prepared a proposal for the repair of another batch of Mi-17 type helicopters. We hope the decision will be made in the near future," noted Andrey Boginskiy, Director General of Russian Helicopters.

At the end of the event, the parties held negotiations related to the supplies of new helicopters and further cooperation in the area of service support of the earlier supplied rotorcraft.