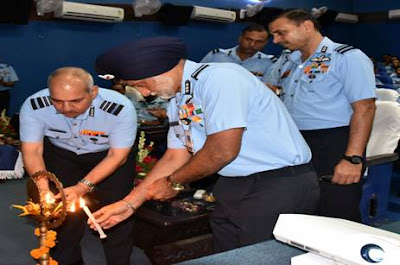 The meeting focused on issues related to IAF Aerospace Safety during Maintenance  and Operations undertaken at units under Maintenance Command in the year gone by and discussed new challenges, current trends and developments in the field of aerospace safety. The occasion was also utilized to audit what had been achieved and the task that lay ahead in ensuring safe flying environment while achieving 100% mission success. The meeting holds significance as Maintenance Command   provides support to platforms and systems across entire Indian Air Force, thereby making a noteworthy contribution to its operational potential and aerospace safety.


Farnborough Airshow is bigger than ever at Aviator

The Farnbourough Airshow is in full swing and The Aviator Hotel, which, marks its 10th anniversary at the end of July, has meticulously planned to welcome its resident and corporate hospitality guests.

Bookings for Aviator’s Brasserie tables started six months ago from companies in sectors including aircraft finance and leasing; law and a healthy cluster of business aviation companies.  Many are repeat customers who have found the convenience of being a five-minute walk away from the rear enclosure of the hotel to the Show’s Gate A entrance, a highly convenient and relaxed experience.  They can come and go as they please, if they have air show visitor tickets (not included in Aviator’s hospitality packages).  Guests also enjoy privileged use of Aviator’s private car park.

For companies who haven’t booked an exhibition stand or chalet but do want to meet with clients in a more discreet and relaxed setting, Aviator offers the ultimate Airshow corporate hospitality package from just £75 per person, including wine.

On its three-course lunch menu this year head chef Matt Mitka and his team are offering a variety of dishes, including Tequila cured mackerel with pickled vegetables, fennel purée and tempura oysters and Pan fried and confit leg of guinea fowl with sweetcorn purée, gooseberries and pressing of purple potato.

“Aviator is a great place to do business, entertain clients and reward colleagues,” says General Manager Dominic Osborne.  It is his first air show, having joined the luxury TAG Group-owned boutique hotel in November 2016, after two decades at The Hilton and Malmaison hotel chains, but he is relishing it.  He can also depend on an accomplished team who have supported five air shows since the hotel opened in July 2008.

“We are virtually full now with our 169 bedrooms and suites, but Airshow week is mainly single occupancy, so in terms of guests in house it won’t be as busy as the Christmas/New Year period for us.   Along with our guests, of whom many are overseas exhibitors at the show, we are looking forward to hosting some 1,000 visitors for corporate hospitality throughout the week - in our six meeting rooms, our two AA Rosette Brasserie, American diner One Eleven and upstairs destination cocktail Sky Bar.”

Aviator has limited availability for corporate hospitality in the Brasserie during air show week, open from 12.30 to 5.30 pm, which offers a great view of the afternoon’s air show from the exclusive, private terrace.

Alsim To Produce Flight Training Devices In The US
Due to continued growth and demand in the North America, as well as Latin America, Alsim will begin producing many of its simulator products in the United States (U.S.) starting in mid-2019. Alsim's new facility, to be based in the eastern U.S., will ensure quicker production and installation of its simulators with more American components. In addition to hardware assembly, the staff at the location will provide enhanced technical services and help develop software. The facility will also maintain a spare parts stockpile, if needed.

It’s been a year of growth for Alsim in the region. It opened an office in Austin, Texas in mid-2017. It began recruiting personnel to help promote their flight training devices to both current and prospective customers and provide high quality customer service. Alsim has added multiple new clients in Canada and the U.S. over the past 12 months including: Adventure Aviation, Cirrus Aviation, Journey Air, Kent State University, Select College, and Springbank Air Training College. In addition, many of their older clients have purchased additional devices like Montair Aviation that now own and operate three Alsim simulators. Alsim also sold, in April 2018, its first simulator into Latin America, an AL250 to Escuela de Aviacion in Columbia.

During the same time period, the 24-year-old company has expanded their product range to include a type-specific Cessna 172 and their new Boeing 737/Airbus 320 hybrid, The Airliner, partnering with the U.S. company Aviation Performance Solutions (APS), headquartered in Arizona and leaders in Upset Prevention and Recovery Training (UPRT) to help produce class leading training capabilities. A large number of these two simulators will be produced at the U.S. facility.

Mike Tonkin, Alsim’s After Sales and Business Development Director, explains “We recruited Dr. Scott Firsing, our Americas Sales and Business Development Manager as the first person on the ground. We then quickly expanded the team to include a Marketing and Communications specialist, Ms. Elise Peterson, installers and technical support. Now with 20+ clients in North and South America, new devices and partners like APS, supporting airline, flight school, university associations, and more announcements to come, the next logical step was to start producing in the U.S.” 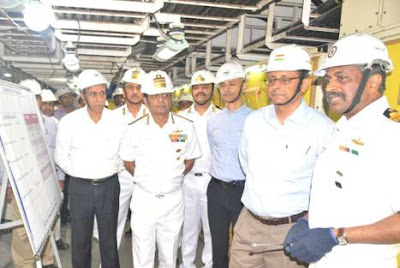 During the onboard visit, the Defence Secretary was given a first-hand briefing on the progress of IAC construction by Commodore Cyril Thomas, the Warship Production Superintendent. ShriMadhu S Nair, CMD,CSL, highlighted the shipyard’s focus on outfitting and trial activities as the project enters its final phase, and re-iterated the CSL’s commitment to meet the timelines for delivery of the ship.

The ship was launched in Aug 2013 and presently, the main propulsion plant, power generation equipment, deck machinery and auxiliary equipment have been installed and integrated on board. Outfitting of various aviation equipment, navigation and communication equipment, weapons and sensors are progressing. In-house trials of ship’s systems by the Carrier Acceptance & Trials Team have already commenced and the sea trials are expected to commence by early 2020.

The Defence Secretary will Depart Kochi on 19 Jul 18. 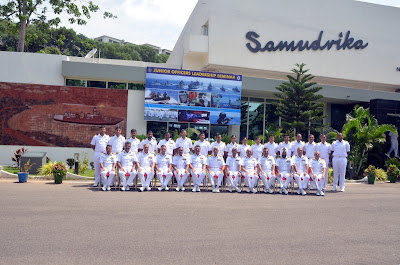 With an endeavor to provide a forum to the junior officers to put forth their views on aspects ranging across professional, technical, training and personnel issues, a Junior Officers Leadership Seminar was conducted by Eastern Fleet at Samudrika Auditorium on 18 Jul and 19 Jul 18. The seminar inaugurated by Vice Adm MS Pawar, Chief of Staff Eastern Naval Command (ENC) was attended by Rear Adm Suraj Berry Asst. Chief of Naval Staff (HRD) Integrated HQ Ministry of Defence(Navy), other Flag Officers, Commanding Officers of Ships and Submarines, Agrani, Director CLABS, representatives from Naval Headquarters, other  Commands and junior officers upto the rank of Lieutenant Commanders, Master Chief Petty Officers and Chief Petty Officers representing all important branches of the Navy.

The two-day seminar conducted under the aegis of HQENC included seven papers presented by junior officers from different fields of the Navy and included contemporary topics such as, “Leadership Challenges in Ensuring Combat Worthiness of Legacy Ships”, “Grooming and Cultural Orientation in the International Environment”, “Leading Civilian Technical Work Force”, “Managing Operations/Administration in Remote Air Base”, “Inspiring Personnel to perform non-Core Functions”, “Managing Technology and Tasking of Strategic Vessels” and “Sailors' Expectations from Leaders”.

Welcoming the delegates and participants, Vice Adm Pawar reiterated that as young leaders one should 'command' respect and not 'demand' it by following the time tested principle of ‘Service before Self’ enshrined in the ethos of our defence officers since inception.  The presentations and deliberations resulted in invigorating discussions which were moderated by prominent senior naval officers. The proceedings of the seminar were summed up eloquently by Rear Admiral Dinesh K Tripathi, Flag Officer Commanding Eastern Fleet. An audio visual presentation of the lecture on leadership by the late Admiral RL Pereira, the former Chief of the Naval Staff was also played and as always made an impact.

Very shortly this site will be famous among all blogging people, due to it's good posts