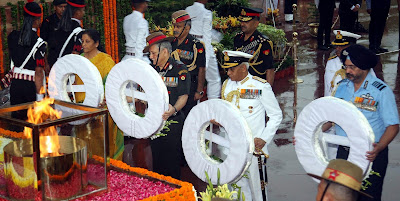 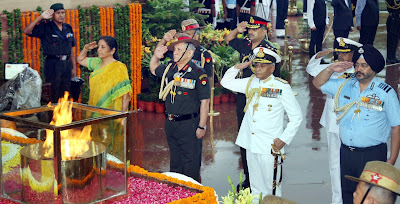 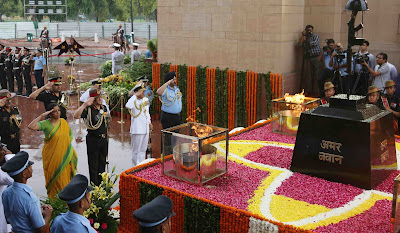 The Union Minister for Defence, Smt. Nirmala Sitharaman along with the Chief of Army Staff, General Bipin Rawat, the Chief of Naval Staff, Admiral Sunil Lanba and the Chief of the Air Staff, Air Chief Marshal B.S. Dhanoa laying wreath and paying homage at Amar Jawan Jyoti, India Gate, on the occasion of Kargil Vijay Diwas, in New Delhi

On the occasion ofKargilDiwas-2018 Raksha Mantri Smt Nirmala Sitharaman along with three Service Chiefs paid their homage to the courage, valour, and sacrifices of the heroes of Operation Vijay at Amar JawanJyoti here today. Smt Sitharaman extended her heartiest greetings and best wishes to all the ranks of Indian Armed Forces, Veterans and their families on the occasion.

The Indo-Pak Kargil conflict, known as Operation Vijay, was fought between May and July 1999, in the most inhospitable and rugged terrain along the Line of Control (LoC) from ZojiLa in the West to Turtok in the East. The conflict was engineered by Pakistan, infiltrating its troops and occupying vacated dominating heights across the LoC overlooking and threatening National Highway besides violating territorial integrity of the Nation. Indian Army soldiers, displaying utmost fortitude and resilience, fought legendary battles in Dras, Kaksar, Batalik and Turtok sectors at heights above 12,000 feet and evicted Pakistani intruders. Indian Air Force also contributed significantly and supported the Army operations.

Smt Sitharaman also expressed confidence that the Indian Armed Forces would continue to serve the country with unwavering dedication and discipline keeping with their glorious traditions. 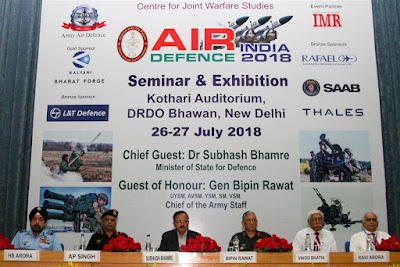 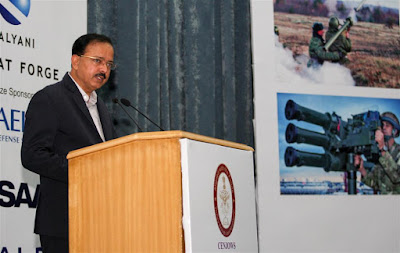 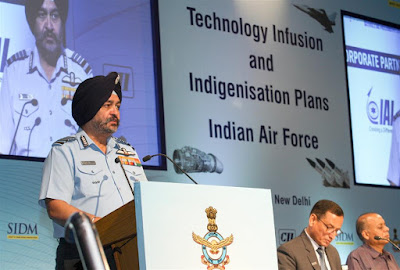 He said Air is a vital aspect of national security and is assuming increasing importance due to the emerging conventional and sub-conventional aerial threat. These threats have multiplied manifolds in the recent past and as the threat has amplified so has the Air Defence set up of the nation.

The RRM stated that in a relative short span of 70 years since Independence, Army Air Defence has witnessed phenomenal growth in its organisational structure and changes in its equipment profile. After its bifurcation from the artillery corps in 1994, the Corps of Army Air Defence has received the importance it deserves to grow and add the much required punch, he added. Dr. Bhamre congratulated the officers, men and women of the Army Air Defence Corps on the occasion of its Silver Jubilee year and urged them all to dedicate themselves to building a robust arm of the Army.