The unique DA-40/DA-42 solution now offers flight training schools a 2-for-1 package that underlines the mission of Euramec to offer the most cost-effective flight training devices for the market.

Bert Buyle, CEO Euramec: “I am thrilled to be able to confirm here at the Farnborough Airshow the availability of this groundbreaking new Euramec offering. What is even more exciting is that we can confirm the first sale of our new combi Da-40/DA-42 flight simulator to a new customer in China.”

In less than 30 minutes, the flight simulator can be reconfigured for either of the Diamond Series aircraft.

The consoles that are being swapped to prepare the flight simulation for either a DA-40 or a DA-42 set up, are in turn ready-made to allow students for desktop training by other students.

“Our solution is a world first and perfectly meets the demand of flight training organisations to maximize their return on investment,” Bert Buyle said.

Euramec has several new flight simulation solutions on the drawing table, ranging from ultralight aircraft simulators to small business aircraft trainers. Euramec is expecting several orders for these new devices with delivery planned in 2019.
Bert Buyle: “We are growing fast and we are ready to expand our worldwide presence. In April the company set up a subsidiary in Hangzhou, China in addition to our existing offices in Harbin, Hong Kong and Singapore. A support office is planned at Shanghai Hongqiao airport later this year.”

During the Farnborough International Airshow, Euramec will also announce a sales and support office in Bangalore, India and possibly a further arrangement covering North America.

Based on the list price for the CRJ900 aircraft, the firm order is valued at approximately US$190 million.

“We congratulate the Government of Uganda for the revival of its national flag carrier, and are thrilled that the new airline has selected Bombardier and the CRJ900 regional jets for its upcoming debut,” said Jean-Paul Boutibou, Vice President, Sales, Middle-East and Africa, Bombardier Commercial Aircraft. “Recognized for its superior economics and efficiency, the CRJ Series aircraft have enabled airlines worldwide to serve communities with better connectivity, and we look forward to supporting the development of Uganda’s regional air travel with these CRJ900 regional jets.”

Uganda Airlines will operate the CRJ900 in dual-class configuration with 76 seats, including 12 first class seats.

“We are delighted to have ordered the world’s leading regional jet, and we look forward to providing the most modern passenger experience in regional aviation to the people of Uganda and across Africa,” said Ephraim Bagenda, CEO, Uganda National Airlines. “As we were establishing Entebbe as a strong hub in East Africa and building more connectivity in Africa, we thoroughly reviewed our needs. With its proven track record in Africa and other regions of the world, we are confident that the CRJ900 aircraft will help us succeed.”

About the ATMOSPHÈRE Cabin

The new ATMOSPHÈRE cabin sets new standards of passenger experience in the regional jet market segment. Key features of the new interior are comprised of larger passenger living space, wheel-first roller bag capability, more spacious lavatory, increased cabin connectivity options, all integrated in a contemporary design and material choices. In fact, the ATMOSPHÈRE cabin design allows passengers to carry and store an “oversized” roller bag within the aircraft cabin bins which minimizes the need to check bags at the counter or the gate.

The 777 contract, which will apply to all new aircraft delivered from the first quarter of 2019, is Saft’s first direct contract with Boeing as a first-tier supplier/integrator. Saft has been providing batteries to Boeing for more than 30 years working via integrators. Saft also has a long-standing relationship with Aviall to offer extensive product and related service support for the worldwide commercial aircraft fleet.

The Boeing 777 battery system provides onboard power for APU (auxiliary power unit) starting and backup for critical systems. It comprises a 60 Ah, 24 V ULM battery together with a charger.

Two battery systems are fitted to each airplane.

Saft ULM aviation batteries have a well-established track record with major aircraft and helicopter manufacturers. They offer Boeing the ideal combination of high performance, low weight, long service life and ultra-low maintenance requirements that enable significant reductions in the TCO for commercial aircraft. The ULM design also benefits from easily replaceable spare parts as well as the capability to be stored for long periods – up to 10 years – with no deterioration in performance.

Incumbent supplier, Pattonair, won the competitively bid contract to support 16 Safran sites globally and deliver over 6,000 C class parts to 180 locations worldwide through to 2025. The contract also encompasses a combination of product cost improvement projects to be driven forward by Pattonair and jointly with SHE.

Pattonair is a SHE Gold Supplier, which recognises those suppliers who can guarantee the best performance and provide a real return on long-term investment.

In 2015, SHE renewed Pattonair’s contract during which it innovated with the introduction of value added services such as kitting solutions to increase efficiency on SHE production lines.

Pattonair serves a 2,000 plus blue chip customer base spanning engine, airframe and systems customers, including Rolls-Royce, GE, Pratt & Whitney, Airbus, MROs and the Aftermarket, from its global network of dedicated facilities. 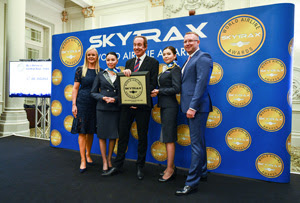 London, UK - Air Astana, the flag carrier of Kazakhstan, has been recognised for 4 Star service excellence, retaining the accolade of ‘Best Airline in Central Asia and India’ in the Skytrax World Airline Awards for the seventh consecutive year.  The prestigious awards ceremony took place at the Langham Hotel in Central London yesterday.

The Skytrax World Airline Awards are recognised throughout the world as a valued benchmarking tool that is independent, impartial and global. The survey measures passenger satisfaction among business and leisure travellers, across all cabins (First Class, Business Class, Premium Economy Class and Economy class).

Over 19 million air travellers were surveyed about their experiences with airlines on the ground and in the air over a 10-month period. The survey measured passenger satisfaction across a wide range of performance indicators of airline front-line product and service, including check-in, boarding, on-board seat comfort, cabin cleanliness, food, beverages, in-flight entertainment and staff service. The survey covered over 200 airlines, from the largest international airlines to smaller domestic carriers.

“We are of course delighted and honored to be recognised once again. This award is particularly important and valued as it has been won based on the personal choice of our customers. I would like to offer them my sincerest thanks and look forward to welcoming them on board again soon. I would also like to recognise our team of dedicated employees who go the extra mile each and every day to provide consistently outstanding service to all our passengers. We will continue to work hard and strive for even higher standards.” said Peter Foster, President and CEO of Air Astana.

Volga-Dnepr Group has launched a new AOG service to manage the delivery of urgent spare parts to aircraft stranded around the world.

Supported by a 24/7 team of aviation professionals, it will offer the fastest and most cost-efficient solution using either air charter or scheduled cargo services, utilising the Group’s unique fleet of Boeing 747, Boeing 737, An-124-100 and IL-76TD-90VD freighters. AOG spares carried on the Group’s scheduled services in Europe, North America and Asia Pacific will be confirmed on the first available flight.

Robert van de Weg, Vice President of Sales & Marketing at Volga-Dnepr Group, said: “As aircraft operators ourselves and as a provider of transportation and logistics services to the Aerospace industry for the last 28 years, we know only too well how important it is to have a fast, trackable and managed solution to deal with AOG situations. For every airline, safety and security is their main priority but it is also important to get aircraft operational again quickly for both customer service and economic reasons when they suffer a technical fault. Airlines are continually focused on improving the reliability of their services through expansion of their fleets, route networks, and optimisation of their aircraft and engines, so it is now more important than ever to have the peace of mind of knowing that pre-emptive solutions are in place to handle their grounded aircraft and to ensure minimal impact to their routine operations.”