India's Independent Foreign Policy Forges Ahead Russian S-400 Deal Despite US Pressure, To Be Signed In October In Delhi

India's Independent Foreign Policy Forges Ahead Russian S-400 Deal Despite US Pressure, To Be Signed In October In Delhi 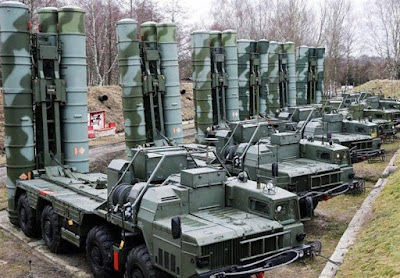 India has demonstrated its independent foreign policy by not being affected by US sanctions on Russia and pressure on New Delhi as far as purchase of defence equipment  from Moscow is concerned.

The deal in question is the much discussed Rs 40,000-crore S-400 Triumf air defence missile system  from Russia for the Indian Air Force, which was cleared by the Indian Defence Acquisition Council (DAC), headed by the former Indian Defence Minister Manohar Parrikar in 2015. India has signed up for five units for defensive purposes. These long-range surface-to-air missile systems can target aircraft, incoming ballistic and cruise missiles and also ground targets. India wants to position them on its 4,000-km-long eastern Indo-China border. It is suitable for mountainous regions owing to its capability of detecting cruise missiles within 40 kilometres , as they can operate in low-altitude flight paths.

The S-400 Triumf mobile multichannel air defence missile system (ADMS) began development in the late 1980s. The system comes with a YAMZ-8424.10 Diesel V12 400 HP/294kW engine and is equipped with a warhead that is directed to ensure a complete destruction of targets. A gas system fires the missiles from a launch tube upto an altitude of 30 meters. S-400 is a complete system with an aim to thwart future air threats.

Despite Pentagon's concerns about Indo-US military interoperability , especially in joint exercises might take a hit if India goes in for S-400 missile systems, South Block is determined to take this up with Washington on July 6th, 2018 in the upcoming first ever meet of the 2+2 Dialogue in which the Indian External Affairs Minister Sushma Swaraj and Defence Minister Nirmala Sitharaman will meet their US counterparts Secretary of State Michael R. Pompeo and Secretary of Defence James N. Mattis.

New Delhi will take up the issue of getting immunity from the newly formulated American law - CAATSA ( Countering America's Adversaries Through Sanctions Act) , as Moscow was placed under sanctions after its annexation of Crimea in 2014, border tension on eastern Ukraine , its alleged interference in the US Presidential elections in 2016 and the more recent accusations by the UK Government of poisoning of an ex-Russian spy Sergei Skripal, based in London, in 2018. The UK Govt alleged that Moscow used chemical agents on Skripal.

In May 2018, Prime Minister Narendra Modi and Russian President Vladimir Putin met for an informal Summit in Sochi, where the matter was taken up. In June this year Russian Ambassador to India Nikolay Kudashev expressed satisfaction at the External Affairs Minister Sushma Swaraj's statement at a press conference, where she said that India follows only UN sanctions and not unilateral sanctions by any country, Kudashev said at a meet,"We are glad that despite the pressure put on India regarding the purchase of the Russian S-400 air defence system, the deal is still on table." Kudashev also assured that the commercial negotiations were almost over and the deal could be signed in the first week of October, during President V Putin's visit to New Delhi, beginning October 5th, 2018 for the annual India-Russia Inter-Governmental Military Commission.
Payment Issues :

The Government-owned Russian defence trading company Rosoboronexport was placed under sanctions by the US Office of Foreign Assets Control (OFAC) and essentially has more than 40 Russian arms manufacturing OEMs being affected. The issue is of payments and finding a legal and safe method so as to circumvent the US sanctions as the Indian govt-owned State Bank of India (SBI) cannot be used for the purpose. In all defence deals India makes use of the state-owned SBI for payment purposes, but for dealing with Russia henceforth, SBI will have to be avoided.

Talks are on with other banks like the Vijaya Bank and UCO Bank, according to sources. According to a Govt official,"Either payment will be made in kind, a sort of a barter, or through these banks, where Russia will open an account and trade in the Indian Rupee, so that SBI is not affected by sanctions. Vijaya and UCO banks are not affected by sanctions therefore they could be used. India buys oil from Russia and exports pharma products, chemicals and food products, so these products could be traded as barter."

CAATSA (Countering America's Adversaries Through Sanctions Act) is a stringent American law , which enables the US Government to punish those nations which engage in defence business transactions with Russia.

India has been a long-time partner of Russia and is the largest buyer of defence hardware.US sanctions on Rosoboronexport can affect deals worth billions of dollars. Besides the Rs 40,000-crore S-400 Triumf air defence missile system  from Russia , there are other defence purchases like three more stealth frigates, one more nuclear submarine to be leased from Russia for 10 years, like the earlier Chakra, 200 helicopter deal to be signed with Kamov-226 with a Make in India- total number required in 444 for the Navy. Army and the IAF, half will be bought and remaining to be made in India, with joint venture with TASL (Tata Advanced Systems Ltd).

Huang Yunsong - Associate Dean, School of International Studies, Sichuan University, on June 18, 2018, said in New Delhi , "The way India has decided to buy S-400 missiles from Russia, despite US strongly opposing it and placing sanctions, India has shown that it does not follow US and does not need it and can  have a foriegn policy without an alliance. It has shown independent foreign policy with Russia."

The deal was announced during Prime Minister Narendra  Modi's visit to Moscow on December 23-24, 2015.

The Inter-Governmental Agreement for the procurement of S-400 Air Defence System was signed in Moscow on October 15, 2016, between both nations, by their representatives, Alexander Fomin, Director of the Federal Service for Military-Technical Cooperation and Indian Ambassador to Moscow Pankaj Saran.

In a recent interview, earlier this month, Indian Ambassador to Moscow Pankaj Saran told a Russian press publication,"Military-Technical cooperation between India and Russia was discussed during the meeting between the leaders. We are committed to all our agreements in this sphere, including purchase of S-400. India has a long history of military-technical cooperation with Russia based on trust and mutual benefit. There is no change in the approach of India to our partnership in this field."

Iraq , Qatar have shown interest in the missile system.

Already operating the system besides Russia are Belarus, China and Algeria, which have already received and are in the process of inducting the system.

Other nations are India and Turkey in the pipeline, who have signed up and will receive the systems. Turkey too like India was in a fix owing to US sanctions, as Washington threatened withdrawal of the fifth generation fighter jets F-35s if Ankara was to buy S-400s from Russia, but the issue was resolved and the first F-35 has been delivered to Turkey.

Former US Secretary of State Rex W. Tillerson said in February 2018 about the deal with Turkey,"We want to consult with Turkey and at least ensure they understand what might be at risk in this particular transaction. We don’t have all the details yet, so I can’t give you any kind of a conclusion, but it’ll be given very careful scrutiny, obviously, and we’ll fully comply with the law. And we are – we are now implementing CAATSA and fully applying it around the world."