Artificial Intelligence (AI) has the potential to have transformative impact on national security. It is also seen that AI is essentially a dual use technology. While it can fuel technology driven economic growth, it also has potential to provide military superiority. India has strong IT industry and huge talent pool of engineers which are advantages which need to be leveraged. Ministry of Defence has already initiated the process of preparing Indian defence forces in their use of AI and how these capabilities can be increasingly developed within the country.

To study the whole gamut of issues surrounding strategic implications of AI in national security perspective, in global context, a multi-stakeholder Task Force represented by members from the Government, Services, Academia, Industry Professionals and Start-ups was constituted in February 2018, under the Chairmanship of Shri N Chandrasekharan, Chairman, Tata Sons. The Task Force, on June 30, 2018 has handed over its Final Report with recommendations. The Task Force in its report has, inter alia studied the level of AI/ML development in India in general and specific in the context of defence needs.

Made recommendations of making India a significant power of AI in defence specifically in the area of aviation, naval, land systems, cyber, nuclear, and biological warfare;

Made recommendations for policy and institutional interventions that are required to regulate and encourage a robust AI based technologies for defence sector in the country.

Considering that most AI work is happening in private sector, made recommendations to work with start-ups/commercial industry in the field of use of AI for defence purposes.

As part of its deliberations, the Task Force had an intensive deliberations with all stakeholder representatives, including officers from Army, Navy, Airforce, Coast Guard, representatives of all Defence PSUs, namely BEL, HAL, BEML, BDL, MIDHANI, MDL, GRSE, GSL and HSL and OFB. Senior representatives from these organizations participated in the day long workshop to deliberate in-depth the various use-cases which are relevant from their respective needs. These discussions had led the Task Force to understand the potential military and civilian applications in AI domain.

Raksha Mantri is the main promoter and patron of the AI Task Force of the Ministry of Defence. The Task Force handed over the Final Report to Raksha Mantri Smt Nirmala Sitharaman, today, for the Government to accept it and to implement its recommendations. 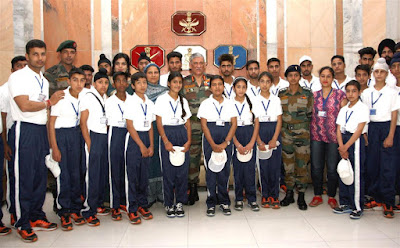 A group of 25 students comprising of 20 boys & 05 Girls, accompanied by 05 teachers from Jammu and Kashmir on National Integration Tour, visited Delhi and interacted with General Bipin Rawat, Chief of the Army Staff (COAS) on 29 June 2018. The COAS shared his experiences while serving in these areas with the students and motivated them to work hard and contribute actively in the Nation Building process. He also exhorted them to join the Indian Armed Forces and serve the cause of the Nation.

The National Integration Tours are educational and motivational tours for youth of Jammu & Kashmir and North Eastern States, with an aim to provide an insight into the rich heritage of the country as well as various developmental and industry initiatives that are underway. This initiative will expose them to various career options and enable them to interact with renowned personalities.

The Chief of Army Staff, General Bipin Rawat with the Officers of the Indian Defence Accounts Service, in New Delhi . 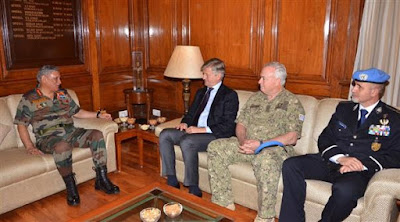 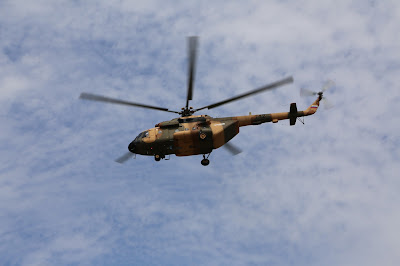 “NARP performs activities associated with the repair and overhaul of Mi-8/17 type helicopters for the whole range of foreign operators, however, the contract with the Border Security Force has been implemented for the first time. During the acceptance the customer’s delegation got familiarized with the results of performed activities and technologies applied at the enterprise. The plant has been highly praised by the Indian military specialists and now further cooperation is being discussed,” - stated Igor Chechikov, Deputy Director General for After-Sales Support Services of Russian Helicopters Holding Company.

The specialists of NARP carried out a complete cycle of activities related to the overhaul of the Indian helicopters. In the short term the batch of Mi-17-1V will get off to the permanent home base, where the final acceptance report will be signed after check flight procedure.

“Currently the Border Security Force is an independent military unit in the Ministry of Home Affairs of India with the sole command and it is considered as the largest border security force in the world, that is why this cooperation means high quality evaluation of our activities and huge experience,” - noted Alexey Belikh, Managing Director of JSC "NARP”.