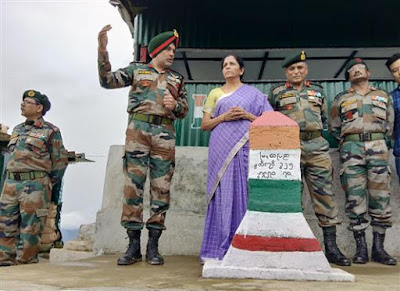 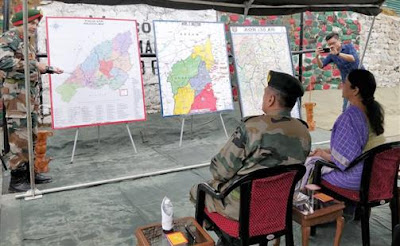 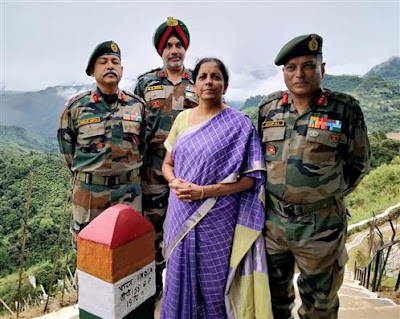 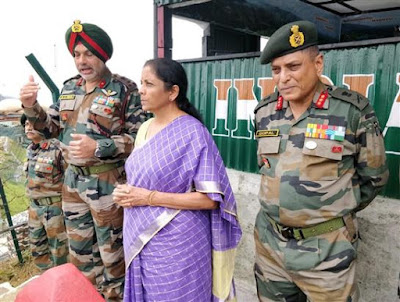 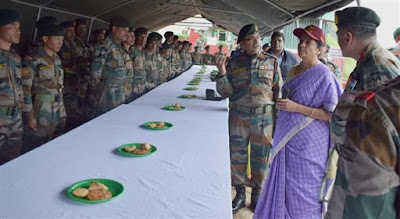 Raksha Mantri Smt Nirmala Sitharaman, who arrived at Dimapur, Nagaland on 29 May 2018, continued her visit to Spear Corps Zone today. The Raksha Mantri undertook a visit of forward posts of the Assam Rifles along the Indo-Myanmar Border and was accompanied by General Officer Commanding Spear Corps Lt Gen Gopal R.

At the forward posts, the Raksha Mantri witnessed first-hand the prevalent conditions and ongoing operations of units deployed for border guarding operations in the area. Here she was briefed by commanders operating on the ground. Having made a comprehensive assessment of the situation, Raksha Mantri Smt Nirmala Sitharaman expressed immense satisfaction on the high standards of professionalism and dedication displayed by units and formations of Spear Corps responsible for operations along the Indo-Myanmar Border.

During her visit to the forward areas, the Raksha Mantri also interacted with local State Government functionaries and representatives of other security agencies. She also met local community leaders of the area and appreciated their cooperation in maintaining security in the area.

Notwithstanding weather disruptions, the Raksha Mantri having accomplished objectives of the visit, departed for Delhi later in the day.

The 13th edition of bilateral annual military Exercise SURYA KIRAN, between India and Nepal Army commenced today at Pithoragarh. The aim of exercise is joint training of troops in counter insurgency/ counter terrorism operations in both jungle & mountainous terrain and disaster management. Exercise SURYA KIRAN can be termed as the facade of long standing strategic ties between India and Nepal.
As part of the exercise important lectures, demonstrations and drills related to counter insurgency, counter terrorism operations and disaster management will be conducted. Both the Armies will also share their valuable experiences in countering such situations as also refined drills and procedures for joint operation wherever the need so arises.

The culmination of exercise will be done with a 72 hours joint exercise which will show the joint skills of soldiers while conducting any counter terrorist operation. 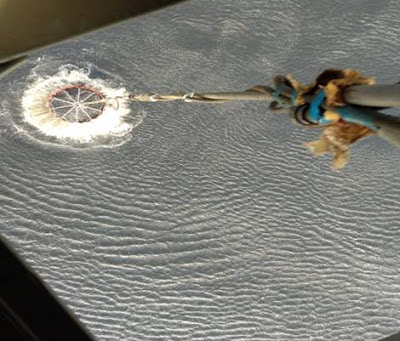 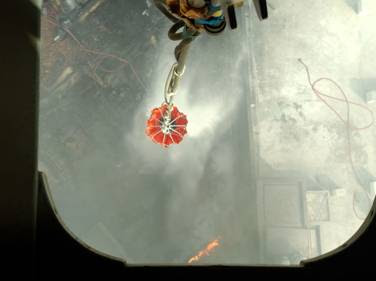 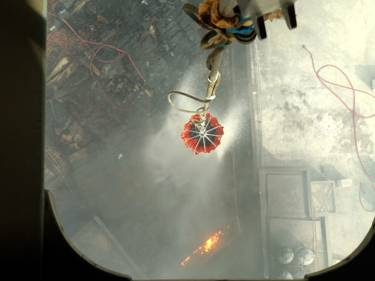 Around midnight a request was received at HQ Western Air Command for containing a fire at Malviya Nagar in Delhi. A MLH class helicopter airborne from Sarsawadid a recce and landed at Palam. Thereafter heptr got airborne with Bambi Bucket to contain the fire.

The heptr filled water from Yamuna reservoir and dropped over the site. This had to be repeated thrice to contain the fire. This was the first time the Bambi ops was done in an urban situation wherein the nitty gritties of drop are very precise owing to high rises around and chances of collateral damage. The operations started this morning wherein helicopter flown by Wing Commander Pradeep Bhola of the Mighty Armourswas successful in dousing the fire.
A total of approx 8000 lts of water was dropped in this incident.

The President of India, Shri Ram Nath Kovind, reviewed the passing out parade of the 134th course of the National Defence Academy, this morning (May 30, 2018) in Khadakwasla, near Pune.

Speaking on the occasion, the President said that he was delighted to review the passing out parade at the NDA. As the Supreme Commander of the Armed Forces, this was a moment of immense satisfaction for him. The Armed Forces are a symbol of excellence and dedication for the entire country. This parade comprises cadets from all parts of India and from a variety of communities. Its harmony speaks for our essential unity as much as for our pluralism as a society.

The President said that a soldier or an officer in uniform, irrespective of whether he or she is from the Army, the Navy or the Air Force, evokes admiration and trust everywhere in the country. If a fellow citizen sees a member of the Armed Forces at a railway station or a market or at any other place, there is an immediate emotion of pride and reassurance. This is due to the unparalleled and unquestioning service to the nation in times of war and peace, on the border or within the country during a natural calamity. The Armed Forces represent the best of the Indian ethos.

The President said that the NDA is more than just a training facility. It is the crucible of valour and bravery. It has inculcated a resolve and a spirit of national service in generations of cadets and generations of officers. It is because of this heritage that in December 1978 President Neelam Sanjeeva Reddy conferred the President’s Colours on the NDA.

Addressing the cadets, the President said that the Armed Forces are not merely about doing a job – they are about answering a calling. And this is a calling for a rare breed of human beings. Today, the cadets have become role models for our young people, guarantors of our peace and prosperity, and guardians of our nation. He expressed confidence that the graduating cadets would prove worthy successors to the unflinching and fearless officers who have preceded them. 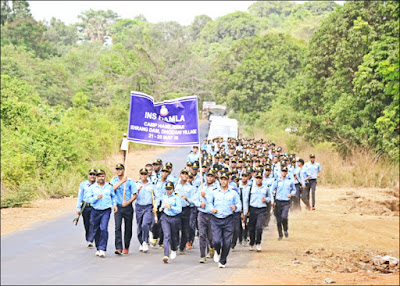 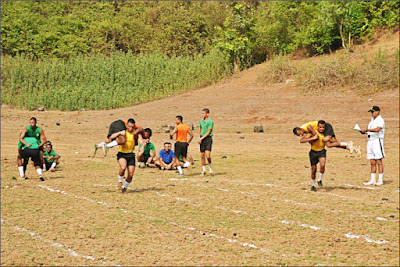 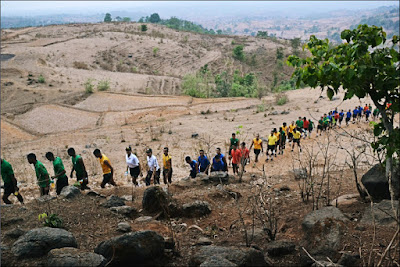 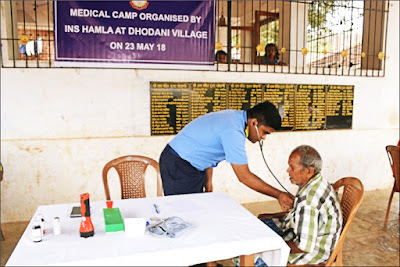 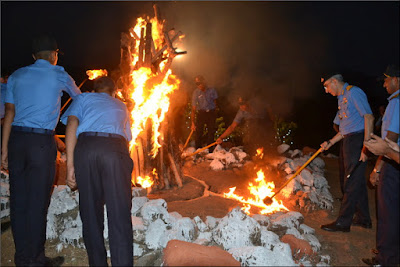 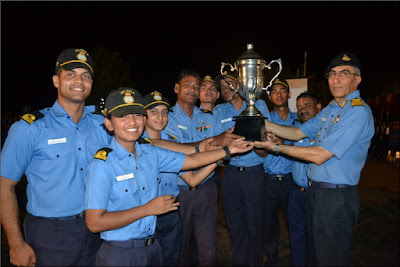 Camp Hamlawar was conducted from 21 to 25 May 2018 by INS Hamla at Dodhani village, Panvel. 488 personnel including three staff officers, 12 under trainee officers of Sub Lieutenant Logistics course, 38 staff sailors and 406 under trainee sailors participated in the camp, which included various activities like trekking, treasure hunt and josh run. The camp was aimed to inculcate team spirit, leadership qualities, esprit-de-corps and camaraderie amongst personnel. In addition, a medical camp was organised at Dodhani village and community work was undertaken at Jila Parishad Prathmik school and community hall. The camp culminated with campfire and presentation of the trophies to the winner and runners-up syndicates.