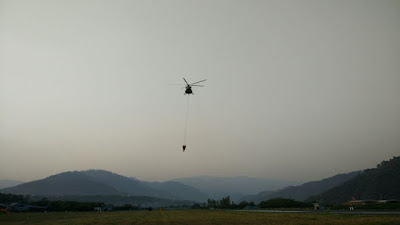 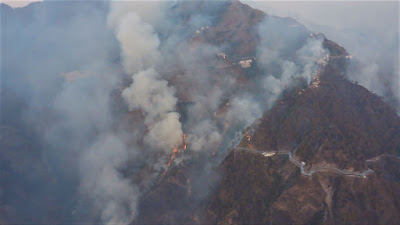 IAF has pressed into service its MLH class helicopter using Bambi Buckets, to contain the forest fire at Katra. The operations stared this morning wherein two helicopters, one each of the Daring Dragons and of Snow Leopards units, of the Western Air Command were launched. The helicopters filled in water from the Reasi water reservoir in the specially built Bambi Buckets which can carry approximately 2500 ltrs of water at a time.

The first drop was done in the area of the new track from Ardhkuwari to Bhawan. “It was a daunting task keeping in mind the challenging terrain and high tension cables in the area” said the captain of the lead aircraft Wing Commander Vikram.

Operation of these types requires special skills by the pilot who flies with a very heavy load underslung. “We trained to respond to these types of situations whenever demanded. The operations are scheduled to continue through the day till the fire is contained” said Wing Commander Rahul the captain of the second aircraft.

A recce of the area was carried out yesterday to ascertain the complexities of the operations.


Joint Military Exercise SURYA KIRAN-XIII between India and Nepal will be conducted at Pithoragarh from 30 May to 12 June 2018.  The exercise will comprise of nearly 300 soldiers from both Indian and Nepal Army who would be sharing their experiences gained during conduct of various counter insurgency and counter terrorism operations in the past.

Exercise SURYA KIRAN is a biannual event which is conducted alternatively in Nepal and India.  Notably in the series of military training exercises undertaken by India with various countries, Exercise SURYA KIRAN with Nepal is the largest in terms of troop participation.  The aim of this exercise is to conduct battalion level joint training with emphasis on counter terrorism operations in mountainous terrain. During the exercise, aspects of disaster management and joint effort towards relief work have also been included.

The joint military exercise will enhance the level of defence cooperation which will further strengthen the bilateral relations between the two nations.