The Defence Acquisition Council (DAC), chaired by Raksha Mantri Smt Nirmala Sitharaman, met here today and accorded approval for the procurement of equipment for the Defence Forces valued at over Rs. 6900 crore.

In a major boost to indigenisation and in realisation of India’s growing technological prowess, the DAC approved procurement of Thermal Imaging (TI) Night Sights for the Rocket Launcher (RL) used by the Army and the Air Force under ‘BUY(Indian) IDDM’ category through established Indian Vendors. The TI sight for 84mm RL will be used by troops in operations to facilitate accurate and continuous engagement of moving and static enemy targets and destruction of field fortifications (bunkers) during hours of complete darkness. The sight will enable own troops to detect and recognize enemy tanks and soldiers’ movement during night and engage them with greater efficiency. Furthermore, the effect of camouflage and concealment will be drastically reduced as RL detachments will be able to ascertain location of enemy taking cover behind foliage and thin walled constructions with greater ease.

The DAC also accorded approval for undertaking Design and Development of the Long Range Dual Band Infrared Imaging Search and Track System (IRST) for SU-30 MKI aircraft under ‘Make II’ sub category and subsequently, for procurement of at least 100 IRSTs under ‘Buy (Indian–IDDM) category.  The system will be able to operate in day and night conditions and will substantially enhance the capabilities of the aircraft.

With the above approvals, in the last eight months alone, the DAC has pursued modernisation of the Armed Forces with greater vigour and has accorded major thrust on indigenisation. Approvals for procurement of equipment valued at approx Rs 43,844 crore, have been accorded, of which, Rs 32,253 crore would be Made-in-India, through the indigenous route.

Closure of Roads in Cantonments

The Cantonments came up during the British era and were exclusive areas where service personnel and their families resided.  Over the years, cities have expanded and a large number of civilians now reside in close proximity of the Cantonments.  Some of these civilians provide essential services to military personnel and their families, while others find the environs of military areas conducive to settle down.  Whilst the passage through Cantonments to civilians who give support to military personnel is provided for mutual benefit, the others who are denied the passage feel aggrieved.  The latter have often raised the issue of closure of roads through Cantonments which facilitates access to their residential areas.

Some good public schools and Army Public School also exist in Cantonments.  Children from civilian background are studying in these schools and cannot be denied access. Hence, a large number of roads have remained open to civilian traffic, even before the orders for opening other roads were promulgated. Therefore, access to additional areas within Cantonments has now been allowed.

Some roads were unilaterally kept closed for very long periods and a review was essential.  A number of iterations were carried out with all stake holders where views expressed by all concerned were deliberated upon.  After giving due thought to the likely implications on the opening of roads, a considered decision was taken to open roads in military areas for one month and thereafter review the nature of traffic passing through these areas.  Decision on opening or closure of roads will be taken after a feedback from Local Military Authorities (LMA) on whether roads can be opened for civil traffic, completely, selectively or as in the past.

There seems to be some apprehension in the minds of military personnel and their families that the opening of roads may lead to a security situation or traffic congestion.  It is clarified that this is a deliberate, calibrated and monitored exercise.  The aim of opening roads in Cantonments is to streamline the process of closure where required after carrying out assessment of the nature of traffic moving through Cantonments by following due procedure.  A freehand has been given to the LMA to close and control access to the Cantonments when there is actionable intelligence input or in case of emergencies.  A simplified procedure will shortly be issued to jointly address the needs of the local public and the military establishment.
Joint indo-Bangladesh Army Trekking Expedition to Nanda Devi east base camp flagged off 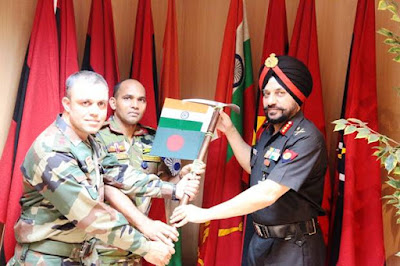 A Joint Indo-Bangladesh Army Trekking Expedition to Nanda Devi East Base Camp (4300m) was flagged off by Director General of Military Training on 28 May 18 at New Delhi. It consists of 16-member team of Indian Army and 10-member team from Bangladesh Army.

Mt Nanda Devi East Base Camp is located at an altitude of 4300M and is one of the challenging trekking routes of Himalayas. The Expedition will negotiate treacherous, rocky and glaciated terrain, slippery meadows and streams enroute. It will test the soldiers for technical skills, mental & physical courage.

The Joint expedition also aims to further strengthen the military to military relations between India and Bangladesh. 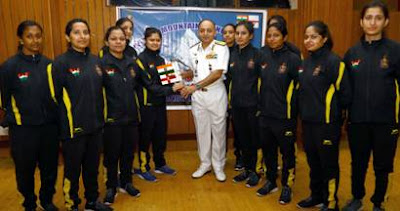 All women high altitude expedition to Mount Deotibba (6001 Mtrs) which is located in Himachal Pradesh, has been organised by the Indian Navy from 28 May to 15 Jun 2018. The expedition was flagged off by Vice Admiral AK Chawla, AVSM, NM, VSM, Chief of Personnel on 28 May 2018 from New Delhi. Lieutenant Commander Kokila Sajwan will be leading the team which comprises of 15 members including two base camp support staff.

Indian Navy had summitted Mt Everest in May 2017. The Service had previously launched the first successful expedition to Everest in 1965 and has been to the South & North poles in 2006 and 2008 respectively. Now, with culmination of Sagar-Parikarma, the circumnavigation around the globe by All Women Navy Team, Indian Navy seeks to achieve a similar feat on land by organising an ‘All Women Expedition to Mt Deotibba as a launch pad for scaling higher peaks including Everest in near future. 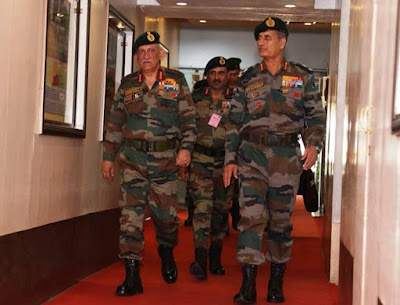 General Bipin Rawat was also briefed by Air Marshal SBP Sinha, Air Officer Commanding-in-Chief, Central Air Command and formation commanders on various other operational aspects. The Chief of the Army Staff expressed satisfaction on the efforts being made to ensure capability enhancement and operational effectiveness of the forces and development of infrastructure in the central sector. He conveyed his appreciation to the Surya Command for achieving a high degree of coordination in operations with the IAF through jointness.

Later, the COAS interacted with the officers of Central Command and exhorted them to be fully prepared to meet all contemporary and emerging challenges.