This historic flight of the Dakota DC-3 VP 905, across seven countries, was a commemoration of the service provided by this venerable aircraft to the nation.  The arduous feat of traversing half the globe in nine days on an aircraft of this vintage is a tribute to the steadfast determination and professionalism of the crew, the unflinching support provided by the Embassies of India in the countries en-route and the unwavering reliability of the old war horse.

The aircraft was escorted on its final leg of the journey, which was over the sea from Muscat to Jamnagar, by a P-8I aircraft of the Indian Navy, a C-130J and the Su-30 MKIs of the IAF. It was received with due ceremony by Air Mshl RK Dhir, AOC-in-C SWAC and the Hon’ble MP Shri Rajeev Chandrasekhar. Air Cmde MK Chandrasekhar (Retd) was granted special permission by the Raksha Mantri to fly on board the aircraft from Jamnagar to Air Force Station Hindan. His presence on the aircraft commemorated the contribution and sacrifice of a multitude of veterans who have successfully operated this aircraft in times of peace and war.

To honour the homecoming of the Dakota, a grand ceremony was held at  Air Force Station Hindan today. The ceremony was attended by the Chief of the Air Staff, Senior functionaries of the MoD, diplomats from the High Commission of the UK, officers of the IAF, representatives from M/s Reflight Airworks and proud veterans of the IAF who have operated this magnificent flying machine.

The unique journey undertaken by the Dakota to its homestead, the Vintage Aircraft Flight of the IAF, was keenly followed the world over and its arrival has scripted an indelible mark in the rich legacy of the IAF.

Inaugural meeting of the Defence Planning Committee
The inaugural meeting of the Defence Planning Committee was held today under the chairmanship of the National Security Adviser Shri AjitDoval. Besides the three Service Chiefs, the committee comprises Defence Secretary Shri Sanjay Mitra, Expenditure Secretary Shri Ajay Narayan Jha, Foreign Secretary Shri Vijay Keshav Gokhale and Chief of Integrated Defence Staff, Lt General Satish Dua, who is also the Member Secretary. The members deliberated upon the geo-strategic landscape and agreed to chart a time-bound action plan in keeping with its broad mandate.

Formations of South Western Command are carrying out Exercise VIJAY PRAHAR employing more than 20000 troops, cutting edge equipment and state of the art force multipliers in the Mahajan Field Firing Ranges close to Suratgarh in Rajasthan. The exercise is aimed to orchestrate wide spectrum of threats which are planned to be tackled through high tempo joint air and land operation involving hundreds of aircrafts, thousands of tanks and artillery pieces supported by real time intelligence, surveillance, reconnaissance and just in time logistic support.

The month-long exercise is essentially to practice the troops in penetrative manoeuvres across the obstacle ridden terrain under a nuclear umbrella.

During the exercise, the formations of South Western Command are practising and operationalising certain innovative concepts of operating in the network centric environment, integrated employment of modern day sensors with the weapon platforms, employment of attack helicopters in the air cavalry role and bold offensive of application of the Special Forces. The formations will refine their drills and procedures for fighting in the nuclear environment during the course of the exercise. 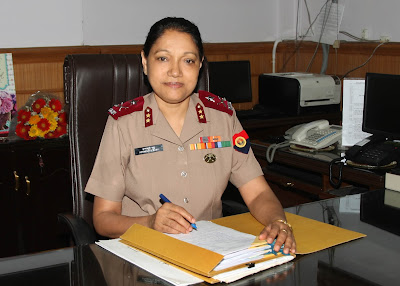 Major Gen AnnakuttyBabu assumed the charge of Additional Director General, Military Nursing Service (MNS),here today. She took over the reins from her predecessor Major General Elizabeth John who retired yesterday. She hails from Koothattukulam in Ernakulum district of Kerala. Born into an agricultural family, she inherited values of compassion and hard work from her parents. Before taking over this appointment, she was serving as Principal Matron, Army Hospital Research & Referral –an apex quaternary care hospital of the Armed Forces. With her extensive expertise, positive leadership and vision, she is able to instil a guiding philosophy of excellence for raising the calibre of patient care.
On this occasion, ADG, MNSsaid the Nursing Service officers play a pivotal role in care of sick &injured soldiers and their families along with medical corps in Tri-Services.

Exercise Harimau Shakti 2018, between the Indian Army and the Malaysian Army commenced on 30 April at Wardieburn Camp, Kuala Lumpur with a brief and impressive handing over of troops ceremony.Lt Col Irwan Ibrahim, Commanding officer of the 1st Royal Ranger Regiment of Malaysian Army welcomed the Indian contingent and wished the Indian and Malaysian troops for a successful and mutually beneficial joint exercise.

First phase of the two week long joint military exercise begin with the formal handing over of the Regimental Flag to the Malaysian Army signifying merging of the two contingents under one Commander.  First day also saw briefings to the joint contingent on Malaysian country brief, exercise settings and security aspects. The day ended with a keenly contested friendly Volley Ball match, which the visitors could finally snatch after a tiff competition. Both armies stand to hone their tactical and technical skills in counter insurgency and counter terrorist operations under the UN mandate. Due emphasis will be laid on increasing interoperability between forces which is crucial for success of any joint operation.

Exercise Harimau Shakti is a positive step in the bilateral relations between the two nations. The conduct of such exercises in future will enable mutual capacity enhancement and assist in building strong bonds of friendship and cooperation between India and Malaysia.

LCA Tejas Achieves Yet Another Milestone Towards FOC Certification 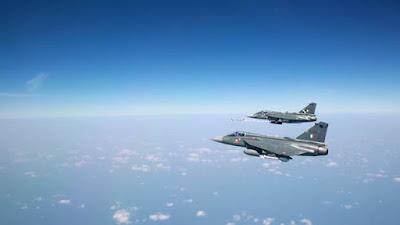 Tejas, the Light Combat Aircraft (LCA) successfully fired Derby Air-to-Air Beyond Visual Range Missile to expand the firing envelope as well as to demonstrate safe operation of the aircraft during missile plume ingestion into the aircraft engine under worst case scenarios. The missile was launched from LCATejas piloted by Wg Cdr Siddharth Singh on 27 April 2018 from the firing range off the Goa coast after exhaustive study of the missile separation characteristics and plume envelope. LCATejas has been designed & developed by DRDO’s autonomous society – Aeronautical Development Agency (ADA).

Integration of Derby, a BVR class missile is one of the major objectives of Final Operational Clearance (FOC) of LCATejas.

The aircraft was tracked by two other Tejas aircraft in close formation to capture the firing event in the specially instrumented high speed cameras for detailed analysis and comparison with the simulation model for validation. The entire planning, practice sorties and final firing was carried out by ADA and it’s National Flight Test Centre (NFTC) officials Cmde JA Maolankar and GpCapt A Kabadwal, IAF, DG(AQA), HAL &  INS HANSA.

Based on the successful integration and demonstration, Regional Centre for Military Airworthiness (RCMA), a unit of DRDO has cleared the series production aircraft of Squadron 45, to be equipped with Derby operational capability.  LCATejas has successfully completed a series of captive flight trials to clear Derby for the full operational capability in the entire FOC envelope. In the past, Tejas has qualified for the armaments and missile release related trials.
Raksha Mantri Smt. Nirmala Sitharaman has complimented DRDO and other agencies involved for making LCATejas fighter jet, a world class aircraft platform.

The Defence Acquisition Council (DAC), chaired by the Raksha Mantri Smt Nirmala Sitharaman, met today and accorded approval to Capital Acquisition Proposals of the Services valued at over Rs 3,687 crore.

In a boost to indigenisation and in realisation of India's growing technological prowess, the DAC approved procurement of Defence Research and Development Organisation’s (DRDO’s) designed and developed NAG Missile System (NAMIS) at the cost of Rs 524 crore. The system includes a third generation Anti-Tank Guided Missile, the NAG, along with the Missile Carrier Vehicle (NAMICA). The NAG missile is a third generation anti-tank guided missile, which has top attack capabilities that can effectively engage and destroy all known enemy tanks during day and night. This will give a quantum boost to the Army's capability against enemy armour.

The DAC also approved procurement of thirteen 127 mm calibre guns for the Navy. These guns will be fitted on-board new construction ships for undertaking surface engagements including Naval Gunfire Support Operations. The guns will enable Naval ships to provide fire support and engagement of targets on the land. These guns have engagement range of 24 kilometres, which could be extended further by using Extended Range Gun Munitions (ERGM). These guns, a long outstanding requirement of the Navy would be procured from BAE Systems of the United States of America under the categorisation of Buy (Global) at an approximate cost of over Rs 3,000 crore.
The DAC also reviewed the progress of the DRDO programme to develop indigenous Airborne Warning and Control System (AWACS).

The third ship of the Landing Craft Utility (LCU) Mk-IV project was inducted into the Indian Navy today at Port Blair. The ship was commissioned as INLCU L53 by Vice Admiral Bimal Verma, AVSM, ADC, Commander-in-Chief A&N Command. Designed and built by Garden Reach Shipbuilders and Engineers (GRSE), Kolkata, the ship showcases the immense potential of the country’s indigenous ship building capability and is in consonance with the national goal of ‘Make in India’.

LCU MK-IV ship is an amphibious ship with a displacement of 830 Tons and is capable of transporting combat equipment such as Main Battle Tanks Arjun, T72 and other Armoured Vehicles. The ship is fitted with state-of-the-art equipment and advanced systems such as the Integrated Bridge System (IBS) and the Integrated Platform Management System (IPMS). The indigenous CRN 91 Gun with Stabilised Optronic Pedestal provides the ship the requisite offensive capability for undertaking patrolling in addition.

The ship, commanded by Lt Cdr Vikas Anand, has a complement of five officers and 45 sailors. Capable of carrying 160 troops in addition, the ships would be based in the Andaman and Nicobar Command bolstering the Command’s capability in undertaking multi role activities such as beaching operations, HADR, search/ rescue, and supply and replenishment of distant islands.

The remaining five ships of the project are in an advanced stage of construction and are scheduled to be inducted into Indian Navy over the next year and half. Induction of these ships will contribute to the nation’s maritime security needs and would accomplish India’s quest for self-reliance in shipbuilding.