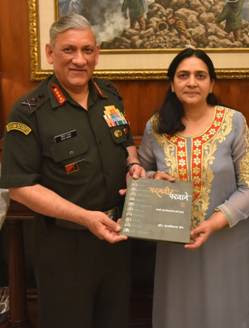 General Bipin Rawat, Chief of the Army Staff released a book on Paramveer Chakra Awardees - ‘Paramveer Parwane’ on 20 March 2018. The book illustrates the bravery of Paramveer Chakra Awardees from 1947 to 1965 and is written by Dr Prabhakiran Jain published by Medha Books. The book has eleven short stories, poems, and songs highlighting the history of the battles in which the brave soldiers sacrificed their lives and have shown the utmost courage & leadership while facing the enemy during War to protect the motherland.

The book is available in paperback & coffee table book format and its second part will be released shortly. Dr Prabhakiran Jain’s contribution to children’s literature has been recognized by many institutions across India. She is a three-time recipient of the Bal Sahitya Samman and Bal & Kishore Sahitya Samman awarded by the Hindi Academy and has 15 books to her credit. The writer has used simple and lucid language keeping young readers in mind. 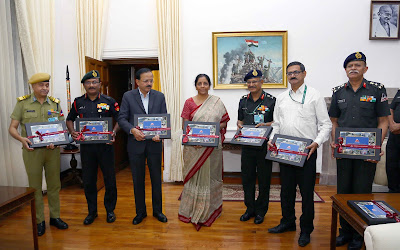 The Union Minister for Defence, Smt. Nirmala Sitharaman releasing a Border Roads Organisation (BRO) Coffee table book ‘Will of Steel’, in New Delhi on March 20, 2018. The Minister of State for Defence, Dr. Subhash Ramrao Bhamre and other dignitaries are also seen.