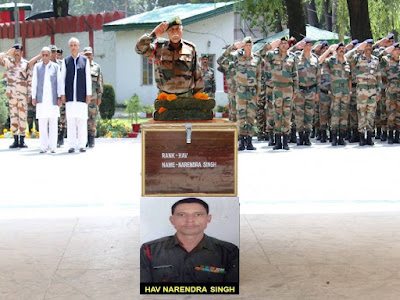 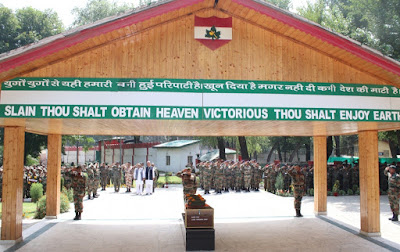 Army today paid befitting tribute to its comrade who attained martyrdom today at 92 Base Hospital, Srinagar. Late Hav Narendra Singh sustained bullet injuries due to enemy fire from across the Line of Control while he was deployed at a forward post in Rampur Sector on 07 Aug 2017. He was provided immediate first aid and evacuated to 92 Base Hospital.

In a solemn ceremony at BB Cantt, Lt Gen JS Sandhu, Chinar Corps Commander and all ranks, paid homage to the martyr on behalf of a proud nation. In a show of solidarity, the Hon'ble Minister for Revenue, Disaster Management, Relief Rehabilitation & Reconstruction and Parliamentary Affairs of J&K Mr. Abdul Rehman Veeri and officials of other security agencies also joined in paying their last respects to the martyr.

Hav Narendra Singh, 43 years of age, had joined the Army in 1994 and hailed from Village Haripur in Dehradun. He is survived by his wife Smt Asha Devi and two young daughters.

The mortal remains of the martyr were flown for last rites to his native village in Dehradun where he would be laid to rest with full military honours. In this hour of grief, the Army stands in solidarity with the bereaved family of the martyr and remains committed to their dignity and well being.