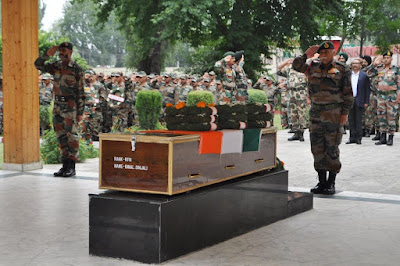 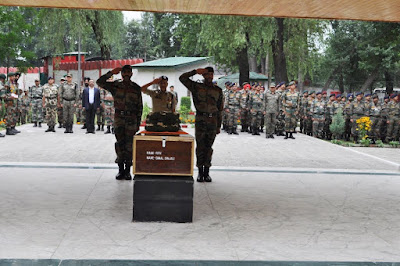 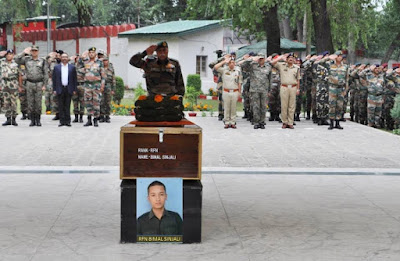 Army today paid befitting tribute to its comrade who had attained martyrdom on 18 July 17 in Naugam Sector of Kupwara. In a solemn ceremony at BB Cantt, Lt Gen JS Sandhu, Chinar Corps Commander and all ranks, paid homage to the martyr on behalf of a proud nation. In a show of solidarity, officials of other security agencies also joined in paying their last respects to the martyr.

Late Rifleman Bimal Sinjali sustained bullet injuries due to enemy fire from across the Line of Control while he was deployed at a forward post in Naugam Sector. He was provided immediate first aid and evacuated from the post but unfortunately succumbed to the injuries.

Martyr Rifleman Bimal Sinjali , 21 years of age, had joined Army in 2015 and hailed from Village Sirukhark in Baglung, Nepal. He is survived by his wife Smt. Yashoda Sinjali and a one year old son. The mortal remains of the martyr were flown for last rites to Subathu, HP, where he would be laid to rest with full military honours. In this hour of grief, the Army stands in solidarity with the bereaved family of the martyr and remains committed to their dignity and well being. 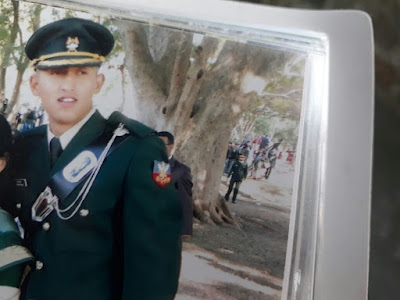 Maj Shikhar Thapa, of 71 Armoured regiment killed by a jawan of 19 Madras battalion-Naik Kathi Resan, who fired two bursts from his service AK-47 assault rifle after the officer scolded the jawan for use of mobile phone in a sensitive area. They were part of 8 Rashtriya Rifles unit deployed in the Uri sector . The Major was commissioned into Shatrunash faternity on 10 Dec 2011. He was an avid sportsman, extremely jovial and an active member of Team 71. He was posted to 8RR Bn on 27 Sep 2015. He hails from Dharamshala and son of Mr Arvinder Kumar Thapa. He got married to Mrs Suvidha Tapa on 24 July 15. The officer leaves behind him young master Suvir Thapa who was born on 09 Apr 2017.