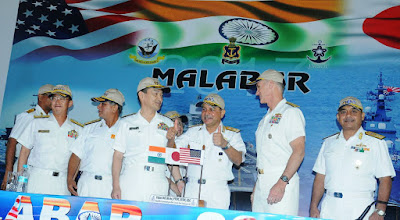 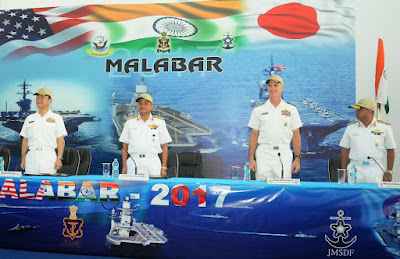 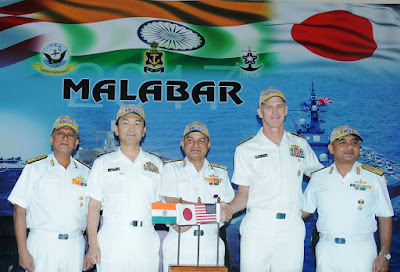 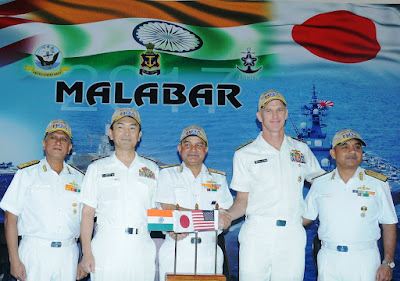 Naval cooperation between India, US and Japan epitomises the strong and resilient relationship between the three democracies.  The MALABAR series of exercises, initiated in 1992 between the Indian and US Navies, have steadily grown in scope, complexity and participation into a multifaceted exercise with the participation of Japanese Maritime Self Defence Force (JMSDF).

The 21st edition of the exercise, MALABAR 2017 will be conducted in the Bay of Bengal from 10 Jul 2017 to 17 Jul 2017.  The primary aim of this exercise is to increase interoperability amongst the three navies as well as develop common understanding and procedures for maritime security operations.  The scope of MALABAR – 2017 includes wide-ranging professional interactions during the Harbour Phase at Chennai from 10 Jul 2017 to 13 Jul 2017 and a diverse range of operational activities at sea during the Sea Phase from 14 Jul 2017 to 17 Jul 2017.  The thrust of exercise at sea this year would be on Aircraft Carrier operations, Air Defence, Anti-Submarine Werfare (ASW), Surface Warfare, Visit Board Search and Seizure (VBBS), Search and Rescue, Joint Manoeuvres and Tactical procedures, In addition, officials from the three countries will be flown onboard the ships at sea on 15 Jul 2017.  A media day would also be held on 17 Jul 2017.

The US Navy will be represented by the ships from the Nimitz Carrier Strike Group and other units from the US 7th Fleet.  The US Navy forces will include the Nimitz-class aircraft carrier Nimitz with its air wing.  Ticonderoga-class Cruiser Princeton, Arleigh Burke-Class Destroyers Kidd, Howard and Shoup along with integral helicopters, a Los Angeles-class attack submarine and one long Range Maritime Patrol Aircraft P8A.  The exercise will also witness a separate interaction between IN and USN Special Forces and Explosive Ordnance Disposal teams at the IN MARCOS training base INS Karna at Visakhapatnam.  The JMSDF will be represented by JS Izumo, a helicopter carrier with SH 60K helicopters and JS Sazanami, a missile destroyer with SH 60K integral helicopter.

MALABAR – 2017 will be another milestone with participation of 16 ships, two submarines and more than 95 aircraft, towards strengthening mutual confidence and inter-operability as well as sharing of best practices between the Indian, Japanese and US Navies.  The exercise is a demonstration of the joint commitment of all three nations to address common maritime challenges across the spectrum of operations and will go a long way in enhancing maritime security in the Indo-pacific region, for the benefit of the global maritime community.