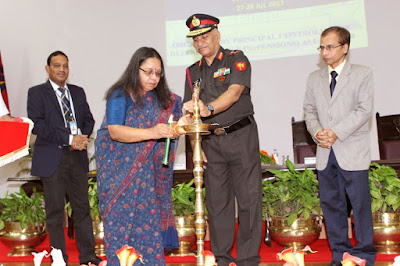 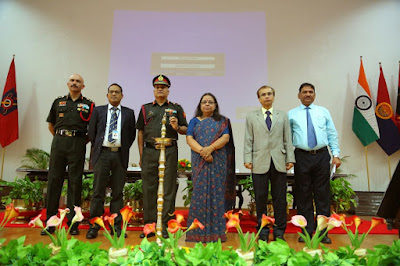 The 148th Defence Pension Adalat was inaugurated at MCEME Auditorium in Secunderabad Cantonment today. For redressal of grievances of Defence Pensioners including  Defence Civilians residing in the state of Telangana and adjoining states. The Adalat was organized by PCDA(Pensions), Allahabad under the aegis  of  the  Controller General  of Defence  Accounts,   New  Delhi  in consultation  with the  Ministry of  Defence. The Adalat  was  inaugurated by Smt Veena Prasad, IDAS, Controller  General  of  Defence  Accounts.

Smt Veena Prasad, IDAS, Controller General of Defence Accounts intimated in her address about various schemes and facilities being implemented for welfare of Ex-service men. She stated that the Government is committed for welfare of the Ex-service men and whenever any suggestion will come in this regard, the government will positively consider  the same.She is also narrated that this office is in process of  switch over the  pension system in new e-pension system in which PPO directly send to concerned PDA’s and ex-servicemen’s E-Mail & pension directly deposited to concerned ex-servicemen’s Bank accounts by PCDA(Pensions) itself. Smt Veena Prasad, CGDA has unveiled a Defence Pension Booklet on the occasion.

In his welcome address, Shri Praveen Kumar, PCDA (Pensions), Allahabad highlighted various projects being implemented for providing improved services to the pensioners. Among others, he mentioned about pensioners portal, Pension Call Centre, e-PPO, e- AUDIT and e-Adalats. Now any pensioner across the country can call on Toll free No.1800-180-5325 and seek clarification or register the pension related problem for speedy disposal.

Major General N Srinivas Rao, GOC, TASAin his inaugural address paid rich tributes to service rendered by Ex-service men during their active service. He lauded various efforts being made by PCDA (P), particularly the initiative of e-Pension Adalat, for increasing the satisfaction level among ex-service men. He advised all veterans to take fullest benefit of the Adalat.

Shri T Rambabu, IDAS CDA Secunderabad spoke about the initiative taken by PCDA(P) Allahabad. He appreciated the efforts of Defence Accounts Department in faster implementation of One Rank One Pension (OROP). He also appealed to all pensioners to register their Aadhaar number and mobile number with their pension disbursement agency. This would facilitate banks to inform the details of pension being paid to  them

During the inaugural ceremony a live presentation has been shown by Shri Sandeep Thakur, IDAS, Joint CDA (Pensions) Allahabad for speedy settlement of grievances of pensioners. The various new features of PCDA (P) web side and design a new format of e- ppo (Civil) were the highlighted segments of the Adalat.

This is the 11th Pension Adalat in the State of Telangana/Andhra Pradesh since its inception in 1987. The Adalat will also continue on 28th July, 2017  at the same venue. All pensioners having pension related problems are advised to attend the Adalat with all their supporting documents.

Interesting article. I have bookmarked your site for future reference. Please check my latest post on audit firm in dubai and let me know what you think.