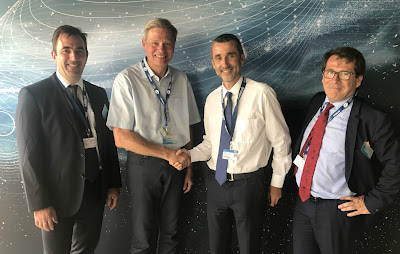 As part of a collaborative agreement signed at the Paris Air Show, Airbus will offer airlines a specialist retrofit solution to deploy EAN on the entire A320 family of aircraft, including A319s, A320s and A321s, which form the backbone of many leading airline fleets in Europe.

The agreement marks a further milestone in the development of EAN; the world’s first dedicated aviation connectivity solution to combine space-based and ground-based networks to deliver a seamless WiFi experience for airline passengers throughout Europe. It follows a separate announcement earlier this year that International Airlines Group (IAG), the parent company of Aer Lingus, British Airways, Iberia and Vueling, will be the launch customer for EAN. IAG has begun equipping its aircraft with the ground-breaking service and aims to have 90% of its short haul fleet complete by early 2019.

EAN is based on a unique infrastructure, which brings together a dedicated S-band satellite and complementary ground network, to offer a fully integrated and seamless network that delivers the service quality and performance assurance not offered by satellite only providers. Because of its unique design, EAN can also be scaled more easily and cost-effectively to match demand.

The network, which is on course to commence commercial services in the second half of 2017, also delivers world-leadership in passenger WiFi technology to Europe. The satellite component, built by France’s Thales Alenia Space, is in French Guiana being prepared for its launch by Arianespace on 28th June. Inmarsat’s strategic partner Deutsche Telekom continues to make good progress on the construction of the complementary ground network.