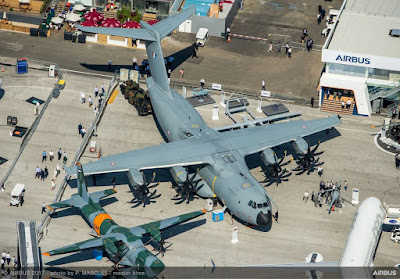 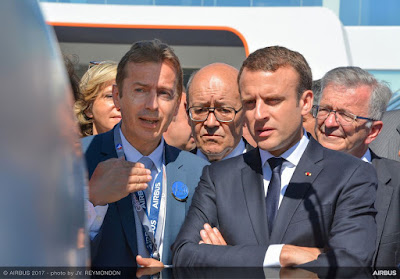 Protom (http://www.protom.com/en/) is proud to be partner of the Airbus Helicopter’s Racer High Speed demonstrator, being developed as part of the European research programme Clean Sky 2. A mock-up of this innovative compound helicopter will be unveiled during the Paris Air Show (https://www.siae.fr/) that takes place at Le Bourget from June 19-25 and will be exhibited at the Cleans Sky booth from the 20th June an until the end of the show.

Protom is the coordinator of the COSTAR project (Compact innOvative SmarT Actuators for next generation Rotorcraft), in partnership with Triumph Actuation Systems Ltd, for the development and qualification of the electromechanical actuators of the demonstrator’s flight controls.

Protom is a highly specialised global consulting and system integration company, with a specific focus on aerospace Structures and Systems Design. It was founded by Fabio De Felice in 1995. Its core business, initially focused on training and management consultancy, allows the company today to operate on several markets, through four business units: IT, Advanced Engineering, PA Consulting and Training. The integration of the different divisions makes it possible to design highly innovative solutions, without losing the tailor-made approach for the optimal realisation of each project.

The Advanced Engineering Division, strengthened in 2013 following the acquisition of a branch of the engineering division of Piaggio Aerospace, operates in the Aerospace, Railway and Automotive sectors with an “Integrated & Make it Work” approach. This focuses on the team-working capacities of technicians and engineers with different know-how and experiences. A strength of the business unit recognised at the international level is its capacity to cover the entire planning cycle of an airplane.

“We are very proud to be working on this project with Airbus Helicopters,” said Protom founder Fabio De Felice. “It is fundamental for our company to be able to consolidate our presence in Clean Sky 2, the research programme which fits perfectly with the international expansion strategy of Protom’s scientific and technological partnerships. The team working ability and the know-how developed by our engineers through different experiences within organisations of multiple original equipment manufacturers (OEMs) makes it possible for us to carry out this integrated approach,” he added.

This project aim is translated in the design objectives of the EMAs to be installed in Fast Rotorcraft for the activation of primary flight control surfaces, the horizontal and vertical stabilisers and the wing flaps.

The intelligent concept EMA is completed by the aim to design digital electronic control to ensure accurate activation and simplify the interfaces with the centralised flight control computer to allow for the implementation of automatic flight control. Furthermore, the electronics also guarantee the activation of continuous monitoring for feedback, the revealing of faults and if necessary, the isolation of faults.

COSTAR (Compact innOvative SmarT Actuators for next generation Rotorcraft) is a demanding project that calls for intelligent solutions to overcome some of the unique requirements of the activation systems of the high speed demonstrator. Triumph Actuation Systems UK and Protom Group SpA possess an exclusive combination of abilities and technology that allows them to develop a complete set of work packages defined to provide a competitive programme of technological development and in the final analysis provide qualified actuators for the Racer flight of the Airbus Helicopter’s demonstrator.

ACSS, an L3 and Thales Company, announced today that its T3CAS® Integrated Surveillance System has been selected by Airbus Helicopters as standard equipment for its new H160 medium-lift, multi-role commercial transport helicopter. ACSS’s T3CAS provides situational awareness and collision avoidance protection to more than 15,000 aircraft worldwide. This marks the first time T3CAS has been selected for a rotorcraft platform, and deliveries are expected to begin in 2018. ACSS products are on exhibit at the 2017 International Paris Air Show.

“We are very excited to bring our T3CAS capability to the rotorcraft market, especially in support of this important new helicopter program,” said Terry Flaishans, President of ACSS. “We worked very closely with Airbus Helicopters to identify the best NextGen surveillance solution to meet H160 program requirements and the upcoming ADS-B mandate. Together, we are committed to ensuring that the H160 has the highest levels of situational awareness, safety and flight efficiency possible.”
The T3CAS is a Line Replaceable Unit (LRU) that can host any combination of Traffic Alert and Collision Avoidance System (TCAS), Terrain Awareness Warning System (TAWS) and Mode S Transponder with ADS-B In/Out capability. The system combines multiple products into a single 4-Modular Concept Unit (MCU) that reduces size, weight, wiring requirements and power consumption.

Honeywell (NYSE: HON) and NASA have completed a two-year test to determine the most effective way to show pilots flying supersonic jets where people on the ground may hear sonic booms, potentially eliminating one of the primary barriers to the broad adoption of supersonic flight. The testing program successfully integrates predictive software and display technology into business jet cockpits, and demonstrated how pilots can see where, and how, sonic booms would affect the population on the ground.

Flying at supersonic speeds would change the aviation industry drastically, enabling pilots to cut business jet travel times roughly in half. For instance, travel time from New York to Los Angeles would be reduced from five hours to 2.5 hours or less. However, the primary barrier to broad adoption of supersonic flights over land are sonic booms, which are loud noises caused by aircraft traveling faster than the speed of sound.

“With predictive technology and knowledge, pilots can change course and minimize the boom over populated areas,” said Bob Witwer, vice president, Advanced Technology, Honeywell Aerospace. “Honeywell and NASA have developed this unique predictive display for civil aviation that has been tested in commercial airspace, bringing the vision of the return of commercial supersonic flight closer to reality.”

In recent decades, NASA worked to develop the Cockpit Interactive Sonic Boom Display Avionics software that predicts sonic boom impact from an aircraft’s current position and flight parameters. As part of the completed two-year test program, Honeywell and NASA integrated the software with Honeywell’s Interactive Navigation technology into a modern business jet’s avionics suite, which allows pilots to predict sonic booms over the aircraft’s future planned flight path. This provides them with actionable information and visuals to assess the boom impact of a flight plan and display trajectories before the boom is generated, preventing the loud sound from disturbing populated areas.

Air Astana, the flag carrier of Kazakhstan, has once again been recognised for 4 Star service excellence, retaining the accolade of ‘Best Airline in Central Asia and India’ in the Skytrax World Airline Awards for the sixth consecutive year.  The airline also scooped the prize for ‘Best Airline Staff Service in Central Asia/India’ for the fifth time. The prestigious awards ceremony took place at the 52nd edition of the Paris Air Show at Le Bourget today.

The Skytrax World Airline Awards are recognised throughout the world as a valued benchmarking tool that measures passenger satisfaction among business and leisure travellers, across all cabins (First Class, Business Class, Premium Economy Class and Economy class).

Air travellers were surveyed by telephone, questionnaires and online about their experiences with airlines on the ground and in the air over a 10-month period. The survey measured passenger satisfaction across a wide range of performance indicators of airline front-line product and service, including check-in, boarding, on-board seat comfort, cabin cleanliness, food, beverages, in-flight entertainment and staff service. The survey covered over 200 airlines, from the largest international airlines to smaller domestic carriers.

“Each one of our staff is dedicated to consistently providing service excellence and therefore we are honoured to receive these prestigious Skytrax awards,” said Peter Foster, President and CEO of Air Astana. “We deeply appreciate the enormous support shown by our customers in the Skytrax survey and will continue to strive for even higher standards in the future.”