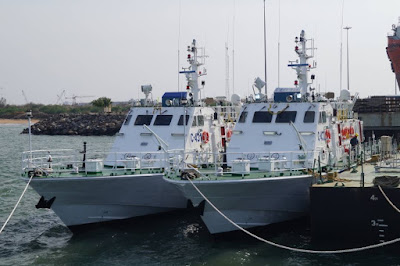 The Indian Coast Guard is on path of rapid expansion, which requires large number of state of art ships and aircraft to strengthen the maritime security mechanism in present scenario.

Two new Interceptor Boats (IBs) C-431 &C-432 built by M/s L&T Ship building have been takeover by Indian Coast Guard on 31 May 17. The boats which were launched on 30 Mar 17 underwent extensive trials on the equipment and machineries fitted and on successful completion of trials the boats were inducted in ICG. The boats which are part of the 36 IBs project contract signed between MoD and L&T shipyard on 19 Mar 2010 will be based at Chennai and Karaikal. Their presence will further strengthen the coastal security mechanism during peace time.

These boats would be utilized for day and night coastal patrol &surveillance, SAR, disaster relief, humanitarian assistance, anti-terrorist, anti-smuggling operations and light intensity military operations. The boats are equipped with ultra-modern technology including sophisticated navigational and latest communication system and are capable of operating in tropical conditions with expected life span of more than 15 years. IBs can achieve speed in excess of 40 Knots. Each IB would be manned by 12 crew, including 01 officer and 02 subordinate officers.