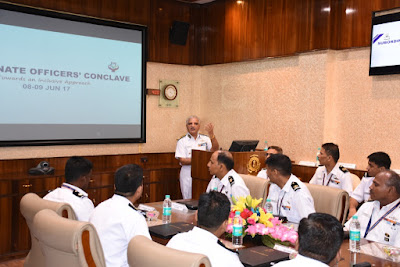 The Second edition of Subordinate Officers conclave was conducted at Coast Guard Headquarters on 08 and 09 Jun 17. This conclave was in consonance with the vision of our Hon’ble PM Shri Narendra Modi for encouraging innovative ideas towards inclusive growth of service for effective decision making within Government departments.

The conclave was inaugurated by Director General Rajendra Singh, PTM, TM, Director General Indian Coast Guard. Speaking on the occasion, the Director General emphasized for active involvement in the decision making process from the actual “BOOTS ON THE GROUND”. He further mentioned that valuable suggestions/points from the Inaugural edition of SO conclave held in 2016 have been implemented and expressed hope that this edition would see more such “OUT of BOX” and innovative ideas.

Furthering the digitization efforts and aiming for “Digital Coast Guard” the Director General launched a mobile app “MITHRA” for better connect and mutual interaction of ICG personnel within service.

Indian Coast Guard was the First Armed Force to have conceived this idea last year and participation was very encouraging. The conclave has not only broadened the horizons of the middle level managers but also has provided them with a platform to express their innovative ideas, thought process before the highest decision making echelons in service.

This second edition of Subordinate Officers Conclave focused on enhancing human relations and inclusiveness, improving clothing and victualling and more importantly improving work and living spaces of the personnel for optimising efficiency of the organisation.