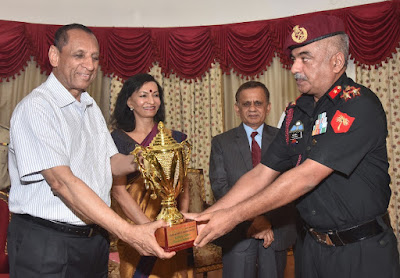 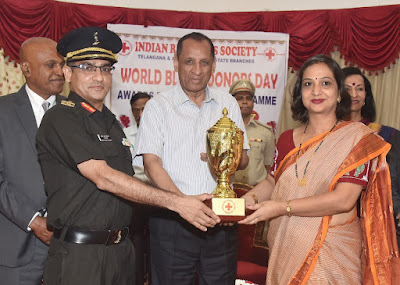 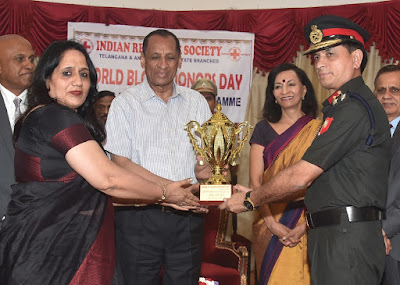 Don’t wait until disaster strikes. What can you do? “Give Blood, Give Now & Give Often”, which has been the theme of the World Health Organization (WHO) on the occasion of World Blood Donor Day 2017. This day is celebrated worldwide, including at National & State Level, where in the efforts & contributions of active motivators & Blood Donors are recognized at respective formal functions.
On 16 Jun 2017, Indian Red Cross Society of both Telangana State (TS) & Andhra Pradesh (AP) chapters jointly organized the Award function at Raj Bhavan, Hyderabad in which Hon’ble Governor ESL Narasimhan, who is also the President of both chapters of TS & AP of the Indian Red Cross Society, presented the award to most deserving & very active Volunteers, who have been regularly coordinating, organizing & motivating in Voluntary Blood Donation Camps, besides to active & regular Blood Donors.

Kudos to Voluntary Coordinators, Motivators& the real heroes- Blood Donor's of Indian Army for their selfless service& saving so many lives by this noble cause of organizing& conducting Blood donation camp's.