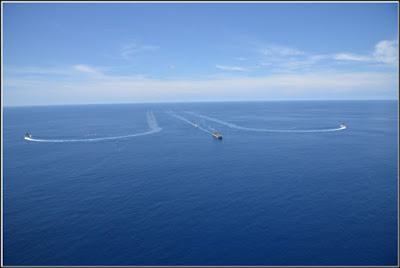 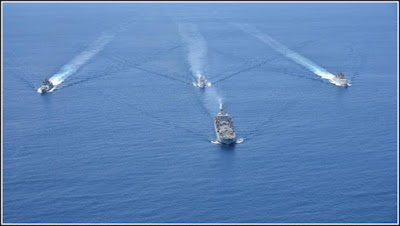 The task force consisting of Indian Naval Ships Shivalik, Sahyadri, Jyoti and Kamorta of the Eastern Fleet manoeuvring in the Andaman Sea, is on a routine deployment to Malacca Strait, the Java Sea, Flores Sea, the Arafura Sea and Southern Indian Ocean under the command of Rear Admiral Biswajit Dasgupta, YSM, VSM, the Flag Officer Commanding Eastern Fleet.  During the course of the deployment, as part of the ‘Act East Policy’, the ships would make port calls at Singapore, Kuantan (Malaysia), Jakarta and Surabaya (Indonesia), Port Moresby (Papua New Guinea) and Fremantle (Australia).

INS Sahyadri and INS Kamorta would participate in the International Maritime Review at Singapore as part of RSN’s (Republic of Singapore Navy) 50th anniversary celebrations for which Admiral Sunil Lanba, PVSM, AVSM, ADC, the Chief of the Naval Staff is also scheduled to participate in the event at the invitation of RSN.  Indian Navy routinely undertakes deployment to friendly foreign nations and in the Indian Ocean Region towards the Prime Minister’s initiative of ‘Security and Growth for All in the Region - SAGAR’.

The ships would also be participating in the annual Singapore India Maritime Bilateral Exercise 2017 or SIMBEX17 with units from RSN and subsequently in the second edition of Australia India (Naval) Exercise or AUSINDEX17. During the port visits, various port calls, interaction with senior military and government leadership, sports and community welfare activities are also planned.