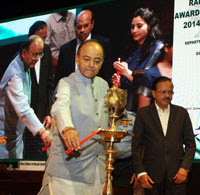 Minister of Defence, Finance & Corporate Affairs Shri Arun Jaitley gave away Raksha Mantri’s Awards for Excellence for the years 2014-15 and 2015-16 in recognition of exemplary performance amongst Ordnance Factories and the Defence Public Sector Undertakings (DPSUs) in New Delhi today.

Speaking on the occasion, Shri Jaitley said that India has conventionally depended for its defence preparedness on DPSUs, which have done an excellent job. Now the emphasis has to be to utilise its entire potential as a country to expand rapidly in defence production. Emphasising on the need for defence preparedness, particularly on the strength of domestic manufacturing, and as India evolves the need for this cannot be more overemphasised.
The Defence Minister further said the policies therefore, are also being liberalised to allow a fair competition between both the DPSUs and the private sector and that is why the recent policy, which the Ministry of Defence (MoD) has approved on the Strategic Partners, factors in both these contents.

Shri Jaitley noted that no country can indefinitely win wars and battles only on the strength of trying to buy imported equipment from outside and said, “I think history has provided us with an opportunity where now our emphasis has to be to improve on manufacturing and that is why the Prime Minister gave this great emphasis on the ‘Make in India’ brand and manufacturing abilities would be incomplete for a country like India unless we improve on our defence manufacturing. Defence manufacturing is also impacted by the security requirements of a country and security requirements are dictated by the kind of neighbourhood you have, and obviously in view of the peculiar situation from a geopolitical point of view where we are located, our preparedness is the best deterrent and which is certainly a guarantee for peace as far as our region is concerned.”

Shri Jaitley inaugurated a grid connected solar power plant of 16 MW capacity at the Ordinance Factory, Medak in Telangana through video link. It has been set up at a cost of Rs. 105 crore by Bharat Electronics Limited. The plant has been set up for captive consumption of the factory, on 80 acres of spare land available with it, making it self-sufficient not only for its power requirement but also reduced carbon footprint.

The Defence Minister  also inaugurated a 9 MW windmill project installed at Dammur, Karnataka at a cost of Rs. 53 crore by BEML through video link. With commissioning of 9MW windmill project at Dammur, BEML would be generating 250 Lakh units which will meet 68 per cent of its energy requirement.