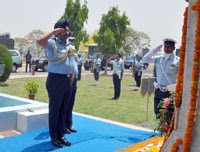 Air Chief Marshal BS Dhanoa PVSM AVSM YSM VM ADC, Chief of the Air Staff, led a four aircraft, MiG-21 'Missing Man' formation flypast today, at AF Station Bhisiana, to honour the valour and supreme sacrifice of Kargil martyrs. The 'Missing Man' flypast is an aerial salute accorded to honour the fallen comrades-in-arms. The Arrow Formation of MiG-21 Bison, with a gap between two aircraft in the formation depicted the - Missing Man. Later, in a simple, yet poignant ceremony, he laid a wreath at the Memorial to honour martyrs who made the supreme sacrifice in the line of duty.

Air Chief was on a three day visit to the station. It is here, while commanding the 17 Squadron Air Chief Marshal BS Dhanoa had flown the MiG-21 T-96 aircraft, currently the oldest fighter in the IAF inventory. On this day in 1999, Squadron Leader Ajay Ahuja VrC (Posthumous) attained martyrdom during Kargil conflict. He was at that time the Flight Commander of 17 Squadron. Mrs. Alka Ahuja wife of Late Squadron Leader Ajay Ahuja VrC (Posthumous) was also present and the CAS presented her a plaque of ‘Missing Man’ formation.

During his visit, the CAS also reviewed security and operational preparedness of the base. He complimented the personnel of the base for their combat readiness; and urged them to "learn from the past, practise in the present, and Win in the Future".

Kargil Martyrs’ Day is observed all across the country to honour the martyrs who had laid down their lives in defence of our country. In keeping with the glorious traditions of the IAF, four air warriors of Air Force Sarsawa too had attained Martyrdom on 28 May 99 during Kargil Operations. On that day, one MI-17 Helicopter of the base took off for a mission with Squadron Leader Rajiv Pundir as pilot, Flight Lieutenant S Muhilan as co-pilot, Sergeant PVNR Prasad as Flight gunner and Sergeant RK Sahu as Flight Engineer. While carrying out a rocket attack on Tiger Hill in the Kargil Sector, the helicopter was shot down by the enemy and these air warriors made the supreme sacrifice in keeping with the highest traditions of service. Since then, 28th May is observed as Martyrs’ Day every year at this Station to honour these brave air warriors. This year, on 28 May the Air Officer Commanding and all air warriors of Air Force Station Sarsawa paid tribute to these brave air warriors by placing floral tributes at the War Memorial to commemorate the 18th anniversary of their supreme sacrifice.

At the same time, four helicopters of the base took off for ‘Missing Man Formation’ in the sky, thereby, remembering the martyrs and showing gratitude towards them. Further, in the evening, a candle lighting ceremony was also organized where all families of the Station gathered and paid homage to the war heroes by lighting candles at the Station War Memorial.