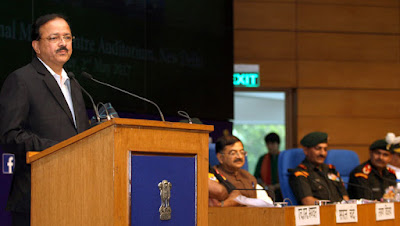 With the inspiration of Prime Minister Shri Narendra Modi, to help create a spirit of respect for our real heroes, Minister of Human Resource Development Shri Prakash Javadekar and Minister of State for Defence Dr. Subhash Bhamre jointly launched a campaign to have a ‘Wall of Valour’ in 1,000 educational institutions across the country, here today. Portraits of Param Vir Chakra (PVC) decorated soldiers will be displayed at designated places on educational campuses to instil sense of nationalism among the students. This is part of a nationwide ‘Vidya Veerta Abhiyan’, initiated by writer and former Rajya Sabha member Shri Tarun Vijay.

Addressing the gathering, Shri Javadekar said, “We feel secure just because of the continuous vigil and alertness of our Armed Forces along the borders.” He stated, Armed Forces are our real post-Independence heroes while the freedom fighters who laid down their lives and faced atrocities for the cause of freedom are the natural heroes.

Speaking on the occasion, Dr Bhamre appreciated the initiative to display portraits of 21 PVC awardees which will usher in spirit of patriotism among the youth of the nation.

Referring to the mutilation of two jawans at Krishna Ghati Sector in Poonch Dr. Bhamre said, “The kind of brutality inflicted on our jawans is a dastardly act, which is sad for humanity and we cannot expect decency from the enemy across the border.” He also complimented our jawans for performing tireless duty away from their families braving the enemy bullets in difficult terrain. He assured the nation that our troops are capable of giving a befitting reply.

On the occasion, Grenadier Yogender Singh Yadav and Rifleman Sanjay Kumar, both PVC awardees, shared their experiences and exemplary acts of valour during Kargil conflict.
Following are the Param Vir Chakra recipients: