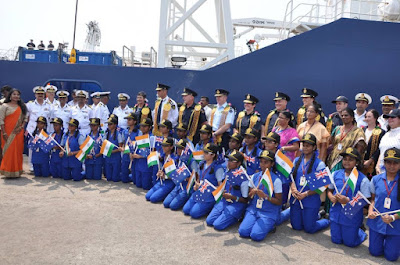 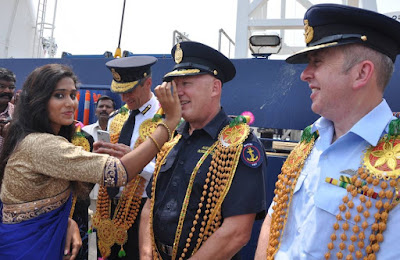 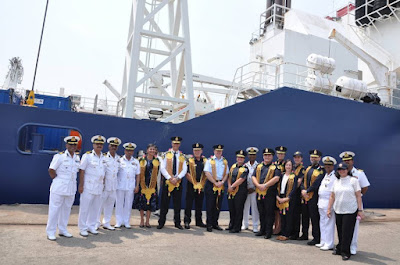 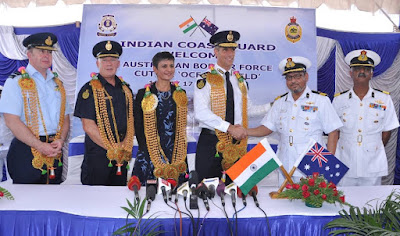 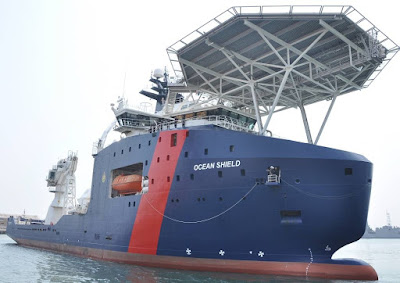 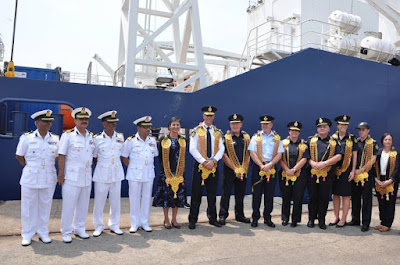 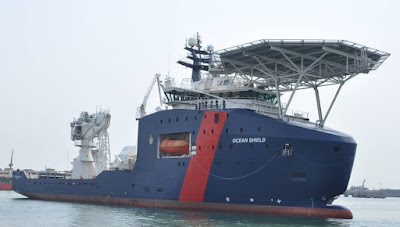 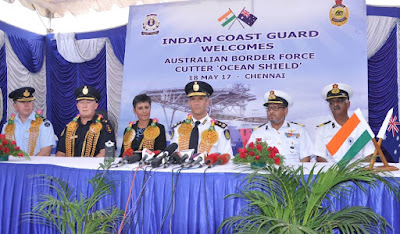 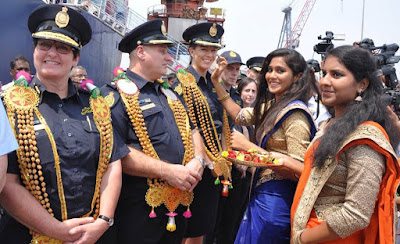 Australian Border Force (ABF) Cutter ‘Ocean Shield’ has arrived at Chennai Port today (18 May 2017) as part of International Co-operation.  The ship will be at Chennai till AM 20 May 2017.  During the visit at Chennai, various events are planned by the Indian Coast Guard for mutual interaction to develop Inter-Operability between the two maritime forces.

The ship was constructed as an Offshore Support Vessel by STK OSV, Tulcea, Romania and was later inducted as ABFC ‘Ocean Shield’, an Offshore Patrol Vessel on   30 Jun 2012. The ship has 110.9 mtr LOA with 22.05 mtr beam width. The ship achieves maximum speed of 16 kts with a displacement of 8,500 tons and draws 6.6 mtr draught. A medium size helipad is available atop the bow of the ship. The ship also has 1,000 Sq mtrs deck area for cargo and equipment. Following the disappearance of Malaysia Airlines Flight 370, ‘Ocean Shield’ was one of the several Australian Vessels that took part in the extensive search of the ill-fated MH 370.

The Australian Cutter is commanded by ABF Superintendent Alan Champkin. The ship has a complement of 16 Officers and 36 sailors. Indian Coast Guard organized a warm welcome ceremony to ABFC ‘Ocean Shield’ in the traditional way on her arrival at Chennai port AM 18 May 17. During the welcome ceremony, ABF Commissioner Roman Quaedvlieg interacted with the Indian media personnel.

As part of the official programme, ICG headed by ADG VSR Murthy and ABF headed by Commissioner Roman Quaedvlieg held deliberations for mutual cooperation on various issues concerning co-operation on SAR, mutual sharing of information on maritime challenges and joint efforts.
During the period of stay, the Commanding officer of the ship called on the Coast Guard Regional Commander, Inspector General Rajan Bargotra and other important dignitaries in Chennai.  As part of cross training and exposure, Australian team will be briefed about the functions of Maritime Rescue Co-ordination Centre and Remote Operation Station at Chennai which will be reciprocated by visit of ICG crew onboard ABFC Ocean Shield.  A friendly volleyball match between Indian Coast Guard and Australian Border Force will also be organized on 19 May 2017.

Australian Ship while departing Chennai port will carry out coordinated exercise with ICG Ship AM 20 May 2017 prior being seen off.