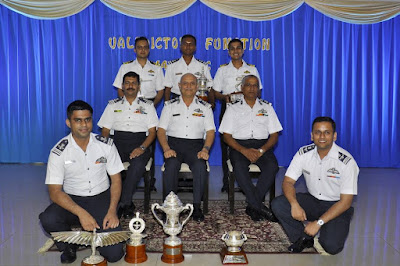 The Flying Instructors’ School (FIS), which is based at Air Force Station, Tambaram, is a unique institution that has established a niche for itself in the field of aviation training. It has rich experience of more than 60 years as an established unit of the Indian Air Force. At the international level, several professional pilots from friendly foreign countries have graduated from this School.
The Valedictory Function for the 142nd Qualified Flying Instructors Course (QFIC) was held on 18 May 17. The Chief Guest for the function was Air Marshal RK Dhir  Param, Air Officer Commanding in Chief, South Western Air Command.  Air Officer Commanding Air Force Station Tambaram, Air Commodore S Shrinivas , was the Chief Host.
Group Captain Vivek Gupta, Commanding Officer of the Flying Instructors’ School, under whose supervision all the training is done, summed up the achievements of the course. The Chief Guest stressed on the invaluable role played by FIS in training Qualified Flying Instructors (QFIs) who are instrumental in producing pilots who meet the desired standards for their organization. These QFIs would thereafter carry the responsibility of guiding newly inducted trainee pilots in consonance with the long term vision of the Indian Air Force.
The QFIC is a gruelling 25-weeks package. It encompasses nine phases of flying training and over 190 hours of ground training. The training of 142nd QFIC commenced on 28 Nov 2016. A total of 26 officers graduated on 18 May 2017. These included 17 officers of the Indian Air Force, 02 from Indian Army, 04 from Indian Navy, 01 from Indian Coast Guard, 01 foreign officer from Bangladesh and 01 foreign officer from Myanmar. The Valedictory Function marked the culmination of the efforts of the trainees and staff of FIS. Graduates of the Course were awarded the coveted symbol of ‘Qualified Flying Instructor’ which they can now wear proudly on their uniforms. The pilots who achieved distinction in flying and ground subjects were awarded trophies:-