Farewell To The Martyrs 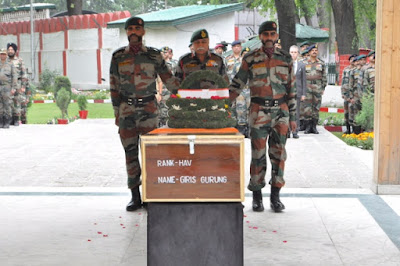 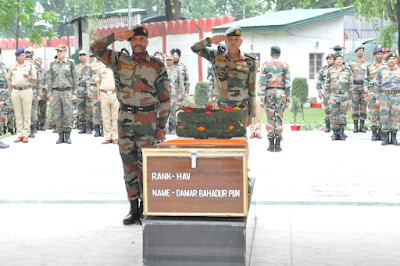 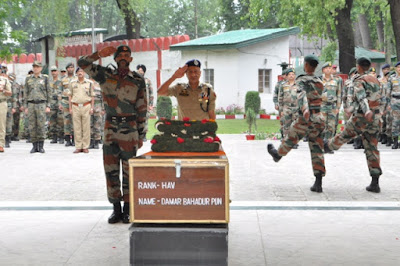 Srinagar, BB Cantt, 22 May 2017.  The Army today paid homage to three of its gallant soldiers who embraced martyrdom in a major counter infiltration operation launched over two days on 20-21 May 2017 along the Line of Control (LoC) in Naugam sector in North Kashmir during which four heavily armed terrorists were eliminated.

Hailing from Nepal, the three intrepid Gorkha soldiers were part of the team that had intercepted a group of terrorists along LoC in the morning of 20 May thus preventing them from infiltrating into own territory. In a relentless operation by the Army, which continued for two days, four terrorists were killed with four weapons and other war like stores recovered from them.

Havaldar Giris Gurung, 38, who hailed from village Nagidhar in Kaski Nepal, had a distinguished service spanning 19 years and had been a part of many counter terrorist operations earlier. The martyr is survived by his wife Smt Panch Maya Gurung and two young children.

Hav Damar Bahadur Pun, 40 who hails from village Karaing Tun in Gulmi, Nepal was an experienced soldier with 21 years of selfless service. The martyr is survived by his wife Smt Kalpana Pun  and two young children.

Young brave heart   Rifleman Rabin Sharma, 23, had joined the Army in 2013. Hailing from Nepal’s Chuwa village in Parbat district, the martyr is survived by his wife Smt Sabita Sharma.

The mortal remains of the martyrs will be taken by Service aircraft to Subathu in Himachal Pradesh for their last rites with full military honours.    The Army stands in solidarity with the bereaved families and remains committed to their honour and wellbeing.