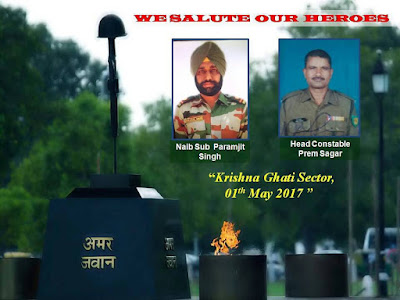 Indian Director General of Military Operations spoke to his counterpart in Pakistan and expressed grave concern about the incident of 01 May 17 in Krishna Ghati Sector opposite POK Battal, wherein Pakistani Army targeted Indian patrol on Indian side of LC and mutilated bodies of two soldiers.

The Pakistani DGMO was also apprised that while undertaking this dastardly act full fire support was provided by Pakistani Army Post located in vicinity of the incident site. He also raised concerns regarding presence of BAT training camps and teams in close vicinity of Line of Control in Pakistan Occupied Kashmir.

DGMO Indian Army conveyed that such inhuman act is beyond any norms of civility and merits unequivocal condemnation and response.