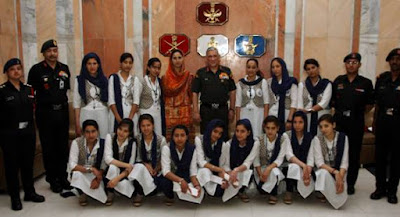 As part of the Indian Army’s ongoing outreach programme to foster the spirit of National Integration across the entire swathe of the country, a tour of 16 Girls from the remote town of Gingle, Uri Tehsil in Srinagar District of  Jammu & Kashmir is being organised form 02 to 11 May 17.  National Integration Tours are educational and motivational tours for school children, youth and local populace of J&K and North Eastern States, with an aim to provide an insight into the rich heritage of the country, various development and industry initiatives that are afoot exposing them to varied career options while providing an opportunity to interact with renowned personalities.

During the course of the tour, the children have visited various cultural and historical places in Bengaluru and Delhi.  The participants interacted with General Bipin Rawat on 09 May 2017, who shared his experiences of these areas with the students and motivated them to work hard and contribute actively in the Nation Building process.


‪District Administration provided an immediate relief of Rs 1.00 Lakh each to NOK of dead and financial assistance to injured. Overall 0ut of 64 villages along LOC in Rajouri 23 are located in Nowshera Sub-Division where 8 villages are badly affected and remaining 15 villages sustained minor losses, 5 Villages in Doongi and 9 villages in Manjakote have been affected.‬
‪Fresh ceasefire violation was reported at Manjakote and Chingus areas at 620 Hrs today morning.‬
‪ Chhotibakri village in Doongi area received more than 30 shells near habitations however no loss of life or injury was reported. Three cattle were reported dead. In Tarkudi area 14-15 shells were dropped however no loss was reported. Team headed by Asstt Commissioner Revenue Paramjeet Singh comprised of a dozen officers from essential services visited and camped in various areas of Majakote. In Niaka-Panjgrain village of Manjakote 3-4 shells were dropped in cross-border shelling. More than 40 shells landed in various areas of Manjakote where 3 houses were damaged. A team of officers headed by Asstt Commissioner Defence visited various affected areas of Doongi-Chingus.‬
‪Six teams of Veterinary surgeons and paravets visited forward areas where more than 50 injured animals were treated. More than 12 animals were reported dead. DC Rajouri has also deputed inter-departmental teams for exact assessment of losses.‬
‪Fourteen buses, 7 Mini-buses, 11 Tata Magic and 03 Tata Mobile vehicles were pressed into action for evacuation with forward areas evacuation through bullet proof bunkers.‬
‪Each family has been provided 11 Kg ration apart from cooked food served in relief camps. Medical teams have been stationed in camps and mobile medial units moved to various camps for check up and treatment. On directions of DC Rajouri 100 table-fans were procured and provided in relief camps. Drinking water tanks have also been installed. ‬
‪The DC camped at Nowshera and visited various affected areas along with SSP Yougal Manhas, SP Nowshera Atul, SDM Harbans and other senior officers of district administration. DC informed that administration is in preparedness for making more relief camps functional as more than 25 buildings have been earmarked. He added that class work of migrant students and local students will be resumed this week to ensure that education doesn't suffer.