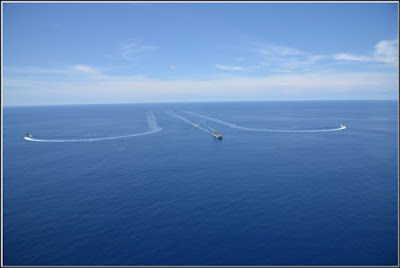 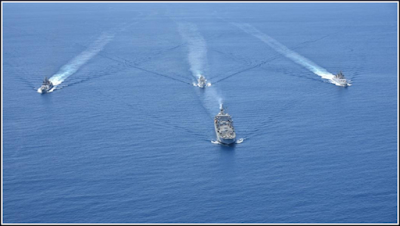 In pursuance of India’s ‘Act East Policy’, Indian Naval Ships Shivalik and Jyoti are on an overseas deployment to the South East Asia and Southern Indian Ocean. The ships would be on a port visit to Kuantan from May 14 to May 19, 2017.

The visit of the Indian Naval Ships seeks to underscore India’s peaceful presence and solidarity with friendly and harmonious countries towards ensuring good order in the maritime domain and to strengthen existing bonds between India and Malaysia. The two countries share a rich history and a strategic relationship. A number of bilateral agreements exist between the two countries in a various spheres.

During the stay in harbour, various activities such as official calls, formal reception on board ships, ships open to visitors, guided tours for Indian naval personnel and professional interaction between naval personnel of both the nations have been planned. In April this year, Prime Minister, Najib Razak visited India and called on the Indian Prime Minister, Shri Narendra Modi for bilateral talks and enhance the partnership between the two countries. In July last year, Admiral Tan Sri Ahmad Kamarulazaman, the Chief of Royal Malaysia Navy visited India to strengthen the bilateral ties between the two navies which have witnessed a steady rise in their cooperation. INS Kora, an indigenously built corvette had recently participated in LIMA-17.

Indian Naval assets have been increasingly deployed in recent times to address the main maritime concerns of the region. In addition, as part of the Indian Government’s vision of SAGAR (Security and Growth for All in the Region), the Indian Navy has also been involved in assisting countries in the Indian Ocean Region with EEZ Surveillance, Search and Rescue, and other capacity-building and capability-enhancement activities. The current deployment will contribute towards the Indian Navy’s efforts to consolidate inter-operability and forge strong bonds of friendship across the seas.

Over the past few decades, India has made substantial advances in terms of designing and building warships indigenously and the visiting ships bear testimony to these capabilities. INS Shivalik, a multi-role stealth frigate is commanded by Captain R Vinod Kumar while INS Jyoti, the fleet replenishment tanker is commanded by Captain S Shyam Sundar.

Indian Naval Ships Shivalik, Sahyadri, Jyoti and Kamorta of the Eastern Fleet manoeuvring in the Andaman Sea.  The task force is on a routine deployment to Malacca Strait, the Java Sea, Flores Sea, the Arafura Sea and Southern Indian Ocean under the command of Rear Admiral Biswajit Dasgupta, YSM, VSM, the Flag Officer Commanding Eastern Fleet.  During the course of the deployment, as part of the ‘Act East Policy’, the ships would make port calls at Singapore, Kuantan (Malaysia), Jakarta and Surabaya (Indonesia), Port Moresby (Papua New Guinea) and Fremantle (Australia).

INS Sahyadri and INS Kamorta would participate in the International Maritime Review at Singapore as part of RSN’s (Republic of Singapore Navy) 50th anniversary celebrations for which Admiral Sunil Lanba, PVSM, AVSM, ADC, the Chief of Naval Staff is also scheduled to participate in the event at the invitation of RSN.  Indian Navy routinely undertakes deployment to friendly foreign nations and in the Indian Ocean Region towards the Prime Minister’s initiative of ‘Security and Growth for All in the Region - SAGAR’.

The ships would also be participating in the annual Singapore India Maritime Bilateral Exercise 2017 or SIMBEX17 with units from RSN and subsequently in the second edition of Australia India (Naval) Exercise or AUSINDEX17.  During the port visits, various port calls, interaction with senior military and government leadership, sports and community welfare activities are also planned.