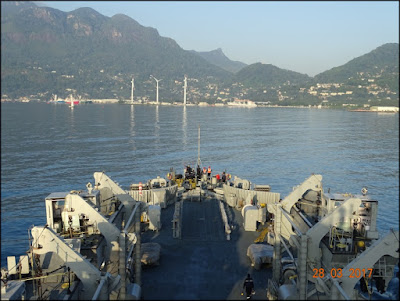 In keeping with India’s national objective of ensuring a secure and stable regional environment to allow unhindered economic and social development, not just in India, but also in the Indian Ocean Region, Indian Naval Ship Shardul is on a two month long deployment in the South Indian Ocean with an aim to provide surveillance support in the region.

The warship during the initial phase of deployment carried out joint EEZ surveillance of Mauritius from 08 – 26 Mar 17 in close coordination with National Coast Guard, Mauritius. Post successful completion of joint EEZ Surveillance of Mauritius, the warship entered EEZ of Seychelles on 27 Mar 17 for Phase I of EEZ surveillance. The warship under the command of Commander Rohit Mishra entered Port Victoria on 28 Mar 17 for OTR. The coordination meeting with Officials from Seychelles Coast Guard and INS Shardul was conducted at Seychelles Coast Guard Headquarters to discuss the modus operandi, extent of surveillance area and communication plan was framed.

INS Shardul set sail from Port Victoria PM 31 Mar 17 with three Seychelles Coast Guard personnel embarked onboard for Phase II of EEZ surveillance and commenced EEZ surveillance AM 01 Apr 17. The deployment was aimed to show presence, deter IUU fishing and drug trafficking. The ship carried out extensive patrol in area (sanitising about 21,000 sq Nm) and interrogated merchant and fishing vessels ensuring safe waters for transit of mercantile traffic and to safeguarding of EEZ of Seychelles.

The warship will enter Port Victoria AM 06 Apr 17 for second OTR and mission debrief. The debrief of the joint EEZ surveillance of Seychelles would be attended by the High Commissioner of India to Seychelles,  Senior Officials from SPDF and Seychelles Coast Guard.

The warship will set sail from Port Victoria harbour AM 08 Apr 17 for Phase III of EEZ surveillance of Seychelles prior returning to India mid Apr 17.

Since 2009, Indian Navy has been deploying ships to the region bi-annually to assist in patrolling of the vast EEZ of the country based on request by host nations. The last such deployment was by the same ship in Dec 16. These committed and custom made deployments for joint patrol by Indian Navy Ships with the Coast Guard of the host nation underscore the strong relationship and cherished bonds of friendship between the nations of the region. These patrols aim to curb illegal fishing activity and thwart the spread of smuggling and piracy in the region. Such visits reinforce the cultural and ethnic ties between the two nations and are testimony to the joint commitment towards cooperative maritime security in the region.

INS Shardul is a Landing Ship Tank (Large) of the Indian Navy whose primary role is to transport troops, vehicles, armaments and accomplish all objectives of an amphibious operation which primarily includes landing of combat equipment and personnel to an Amphibious Objective Area. INS Shardul has the capability to launch and recover Marine Commandos through sea as well as by helicopters. In addition, the ship can act as a ‘Hospital Ship’ with facilities provided in containerised form as well as a ‘Fleet Tanker’ for limited mission/ exercise. The ship is routinely deployed with the First Training Squadron and is responsible for the ab-initio sea training of Young Officers of Indian Navy.