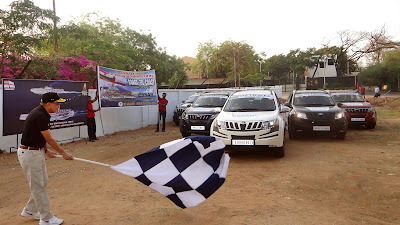 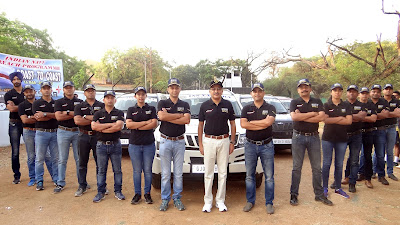 The final leg of "Coast to Coast" car rally organised by Indian Navy as part of Social Outreach Programme was flagged off from Secunderabad this morning by Rear Admiral K Srinivas, Station Commander of Navy.  This programme is an initiative of the Southern Naval Command organised as part of celebrations to commemorate the Platinum Jubilee of INS Valsura. Admiral Sunil Lanba, Chiefs of Staff Committee (COSC) & Chief of Naval Staff (CNS) was in the city and interacted with the team members on their arrival last evening. The rally is now heading back to Jamnagar touching Pune.

The Indian Navy is commemorating the event with a unique ‘Coast to Coast' Social outreach programme to connect with the children and youth of the country along both coasts. This mega road trip by 12 Officers including 2 lady officers and 3 sailors in five cars departed INS Valsura, Jamnagar on 16 March 2017 and covering a distance of over 6000 km touching all major Naval establishments and historical maritime places of interest. The rally will conclude at Jamnagar on 02 April 17.

INS Valsura, the premier training institute for the Electrical Engineers of the Indian Navy, is a 75 - year old establishment of the Indian Navy located at Jamnagar, Gujarat.  The establishment boasts of a rich maritime heritage dating back to pre-independence India of 1942, when the British Navy set up a Torpedo School on 15 Dec 1942 and named it Val-Sura from the Tamil words Val-"Sword" and Surah - "Fish". The "Swordfish" was a legendary carrier borne Torpedo carrying aircraft of the Royal Navy during World War II. This aircraft contributed to several victories of the British over the Axis forces, including the attack on Taranto naval harbour in Italy in Nov 1940, which caused major damage to the Italian Fleet, as well as the sinking of the German battleship Bismarck in May 1941. History has it that the waters around Jamnagar were home to the Swordfish too and hence the name was very apt.