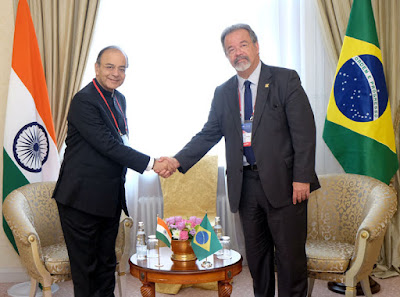 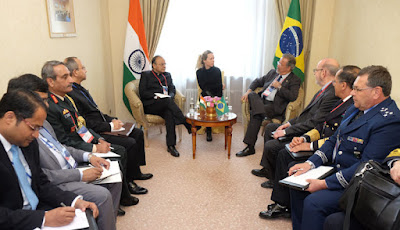 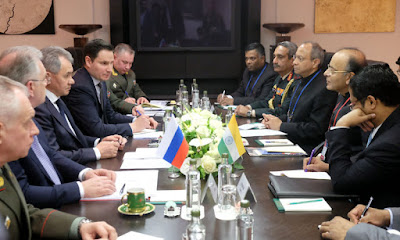 The Minister of Defence, Finance and Corporate Affairs, Shri Arun Jaitley attended the 6th Moscow Conference on International Security on 25 and 26 April 2017 and spoke at the plenary session.

The Defence Minister had a warm and productive meeting with his Russian counterpart Mr. Sergei Shoigu.

“Diplomatic relations between India – Russia are in the 70th year. This is a relationship which goes far beyond just the relations between the Governments. Russia has been a true and trusted friend of India, which is regarded so by the people of India, and there has been a much greater cooperation at the level of Defence. It is a cooperation which extends to Joint Military exercises, training cooperation and also with regard to supply of equipment which India purchases from Russia. We have future plans to set up manufacturing units in India and these are subjects of discussion which came up in my bilateral meeting with the Defence Minister and I am sure with the level of engagement we have, this relationship will continue to grow”, Shri Jaitley stated.
Defence Minister’s address on ‘Global Security: Challenges of The 21st Century’ in Moscow
Following is the speech delivered by the Defence Minister Shri Arun Jaitley at the 6th Moscow Conference on International Security in Moscow, Russia, today.
“Mr. Alexander Fomin, Deputy Minister of Defence of the Russian Federation, Mr Hamid Karzai, fellow Ministers, distinguished delegates, ladies and gentlemen,
It is indeed a pleasure for me to address the Sixth Moscow Conference on International Security. I am honoured to represent India at this important event and thank Deputy Minister Fomin for his invitation.
At the outset, I felicitate the organisers for the excellent arrangements and the programme drawn up for this conference.
The participation this year is impressive, with representation from a large number of countries. The Moscow Conference has established itself as one of the most important global forums for discussions on contemporary security matters.
The theme of the current session covers emerging trends in global security. It is appropriate that we discuss this subject in Moscow, which is one of the key centres for decision-making on global security issues in keeping with Russia’s significance and influence in world affairs.
As a long-standing friend and strategic partner, India supports an expanded role by Russia in global affairs, especially in our shared neighbourhood.
The fact is that the problems confronting the world today cannot be solved by any one country or group of countries but require an inclusive approach.
I welcome the Russian Defence Minister’s Opening Address to the Conference, which underlined Russia’s intent to seek new avenues for regional and global stability and a constructive approach towards resolving conflicts.
India and Russia share a special and privileged strategic partnership, which has stood the test of time. Our cooperation in defence and security matters in particular has been robust. Russia is India’s foremost defence partner.
I look forward to my meeting with Deputy Minister Fomin later today to discuss how we can together further deepen our defence ties.

Over the past few months, India and Russia have taken steps to further strengthen the engagement between our armed forces. We will shortly negotiate a new armed forces training agreement.
Later this year, Indian and Russian Armed Forces will hold the INDRA tri-services joint military exercises in Russia. This would be a historic occasion as it will be the first time that India and Russia are taking part in joint exercises in such a format with each other or with any other country.

India deeply appreciates Russia’s support at difficult periods in our history. This unwavering support from Russia is reflected in the depth of public support in India for building a stronger partnership with Russia.

I am confident that India and Russia can continue to work together on all issues of mutual interest, whether bilaterally or multilaterally in the framework of BRICS, SCO and other forums.

Ours is an age of rapid and unpredictable change. Nowhere is the pace and direction of these changes faster and more complex than in the geopolitical and strategic arena.
The continued unpredictability in ties between major powers recently has brought new uncertainties to the fore. The implications of these developments are difficult to fully ascertain at this stage.

On the one hand, these reflect a wider diffusion of power in the international system, which by itself is a positive development. However, we need to manage this change effectively for our mutual benefit.

There are also worrying signs of economic protectionism. New barriers to migration and the closing of borders are other elements of such an approach. However, such efforts are unlikely to be able to address the complex issues involved.

The growing role and importance of Asia is a striking aspect of the changed international environment. For the foreseeable future, Asian economies will continue to be the drivers of global growth. Asia could also be emerging as the stage for competition between large and rising powers.
Europe appears pre-occupied with the future of the EU project. We are also witnessing a sharpening of divisions in the European continent not seen since the Cold War.

In West Asia, turmoil thrown up by rapid political changes in the region has yet to be fundamentally resolved. These changes have also led to the rise of groups with extremist, fundamentalist or terrorist ideologies, whose activities have forced open sectarian fissures and violence.

The situation in Afghanistan continues to be challenging. Facile assessments that imply there is a choice between the evil forces at play in that country are endangering the gains made by the brave Afghan people with the support of the international community over the past decade and more. The recent condemnable and dastardly attack on the Afghan national security forces in Mazar e Sharif was a sharp reminder of this.

A policy of zero tolerance towards violence and terrorism and continued efforts to consolidate the capacity of the Afghan government to deal with violence as well as promote development are essential.

India believes that a secure, stable and peaceful Afghanistan is achievable with the continued commitment of the international community. India has provided assistance and support to the friendly people of Afghanistan. We will continue to do as much as we can. We also look forward to working in tandem with all parties that share similar objectives in Afghanistan. We welcome recent efforts by Russia to hold consultations on Afghanistan, in which India had also actively participated.

The scourge of terrorism remains the primary security challenge for all peaceful countries. Russia continues to be a target, with the attack in St Petersburg still fresh in our memory. I wish to convey India’s strong solidarity with Russia and our sympathy for the victims and the families affected by of this dastardly attack.

Terrorism is being reinvented in newer and even more dangerous manifestations. The manipulation of young minds by fundamentalist groups using new technologies and social media has already caused long-term damage to our societies. One manifestation of this is the recent string of lone-wolf attacks in many countries.

On the positive side, the territory acquired by ISIS in the Middle East has begun to be effectively challenged by several countries. This is reassuring and should be taken to its logical conclusion. Cooperation between major powers in this effort can become a template for similar steps elsewhere.
However, even as we work to eliminate the breeding grounds of terrorism in West Asia, the dangers of such elements returning to their home countries has become a major challenge. We need to encourage closer information exchanges and intelligence cooperation to address this threat.

We should also resolutely resist opportunistic efforts by some states to support terrorist proxies by training, funding or providing safe havens to such groups for their limited objectives.

Distinctions are still sought to be made between good and bad terrorists, despite all the evidence and experience to the contrary. Terrorism will recoil on those who nurture it.

The global nature of this menace and the need for a coherent and sustained international response to it is now widely acknowledged. Nearly all countries present at this conference are taking proactive steps to counter international terrorism.

India will steadfastly partner all friendly countries confronted with the challenge of terrorism. We have successfully addressed this threat for over three decades. We will continue to strengthen ongoing cooperation in counter-terrorism with our partners.

Another serious challenge facing us today is the resurgence of territorial disputes in the maritime domain.

Maritime territorial disputes are particularly complex and need to be managed effectively, lest they undermine the regional order as well as structures and processes that help maintain peace and stability.

In the Asia Pacific, the past decades of peaceful growth have transformed that region into one of the most dynamic engines of the global economy. We need to ensure that the continued prosperity of the region is not put at risk.

India believes that the rights of freedom of navigation and over-flight as well as unimpeded commerce should be ensured. These are vital to India’s own economic engagement with the Indo-Pacific region.

The recent escalation of tensions in the Korean peninsula is a matter of concern. The linkages between proliferation in that region with the deterioration of India’s own security environment is widely known. Addressing the current situation should acknowledge this aspect and address issues from a broader perspective to be fully effective.
Another aspect of the current security scenario is the growing salience of non-traditional threats to security. Effective management of cyber-space has emerged as a key national security challenge for many countries. Humanitarian assistance and disaster relief requirements are also increasing, fuelled both by man-made and natural causes.

India will continue to play its due role in the maintenance of regional and international peace and stability. India’s rapid growth over the past two decades has also helped elevate the economic trajectory of our smaller neighbours. With our renewed emphasis on regional connectivity, the focus on Act East, the ongoing effort to engage with Gulf countries, Africa as well as the wider Indian Ocean Region, India is now at the centre of a dynamic web of partnerships.

Our economic and diplomatic engagement with the Eurasian region is also a top priority for India. Building on our strong ties with Russia, we also hope to steadily enhance our linkages with Central Asian countries.

Defence and security cooperation is an increasingly important aspect of India’s diplomatic engagements. We are building greater military to military ties, sharing best practices, enhancing our training cooperation as well as tie-ups in defence industry and research & development for mutual benefit. These efforts are making significant progress.

I am confident that these partnerships will contribute to a more stable and peaceful environment as well as spur greater economic growth and shared development in India, our region and beyond.