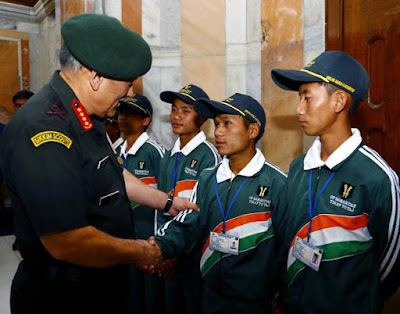 Students from the lesser known Tirap District of Arunachal Pradesh interacted with General Bipin Rawat, Chief of the Army Staff today and shared a cup of tea.

General Rawat narrated his experiences of these areas to the children and motivated them to work hard and contribute actively in the Nation building process. The General exhorted the young students to emulate the footsteps Hav Hangpan Dada, Ashok Chakra who also hailed from Tirap district and made the supreme sacrifice in the line of duty.

In addition to offering the life time opportunity of interacting with renowned public figures, these ‘National Integration Tours’ serve to educate school children, youth and locals of the border areas on the rich heritage of the country and various industry initiatives, exposing them to various career options. Present tour is being organised from 08 to 23 March 17 taking these children through cultural and historical places in Delhi, Agra and Lucknow.