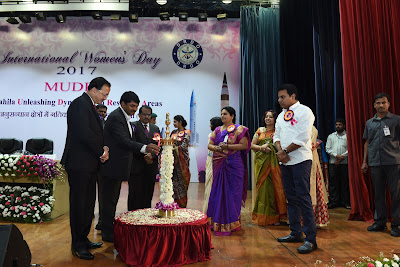 International Women’s Day for the year 2017 was celebrated at Research Centre Imarat, Dr APJ Abdul Kalam Missile Complex, in Hyderabad today. ASL, the nodal laboratory for the event organized a National workshop on Mahila Unleashing Dynamism in Research Areas “MUDRA”, which showcased women as “Dynamic Leaders” in decision making in DRDO for the achievement of R&D in all spheres.

The Minister of State for Defence, Dr Subhash Bhamre, and the Telangana Minister of IT Shri K.T. Rama Rao were the Chief Guest and Guest of Honour respectively. The event was also attended by Secretary DD R&D and Chairman DRDO, Dr S. Christopher, Scientific Advisor to the Defence Minister and DG (Missiles and Strategic Systems), Dr G. Satheesh Reddy, Chief of Integrated Defence Staff, Lt. Gen Satish Dua. Invited Talks were organized on issues related to Women’s Empowerment and Challenges faced by women in day to day life. A panel discussion on “Challenges faced by women in Research areas” was also conducted.

“Government of India has taken many initiatives to promote female child development and women empowerment like Beti Bachao and Beti Padhao, Mahila e-Haat, Rashtriya Mahila Kosh, Women of India Exhibitions and other important programmes. In recent years, there has been a paradigm shift in effective women participation in all walks of life but still there is a strong need to orient more and more women towards Science and Technology.”

The Minister of State for Defence said, “I urge upon the young women scientists present here to take the lead and promote science and technology among female students at various schools, colleges, universities and other academic institutions. You have to be the much needed catalyst for raising scientific temper among students. The future of this great nation, India is equally in your hands; mould it the way you dream and keep inspiring all of us.”

The Telangana Minister of IT and Industries & Commerce stressed on breaking stereotypes and lauded efforts of women in national development.

In his message, Dr S. Christopher said, “the women across the globe have set a benchmark not only in the areas of science and technology but in all spheres of work. The dynamic contribution of women professionals has enabled our organisation to scale greater heights.” He also said, “women should not think they are nothing but also should not imagine that they are everything. But should always think that they are something and capable of doing everything.”

Dr. G. Satheesh Reddy said, “I have always been inspired by the women employee’s commitment, achievements and innovations. The women of DRDO have played an important role in the successful missions and have contributed immensely in strengthening the path of self-reliance in defence technologies.