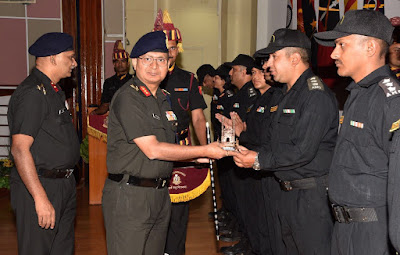 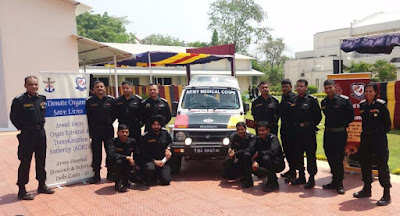 A team of nine officers, led by Colonel Prashant Pandit and Colonel (Mrs) Pradhi Nambiar are on a “Health Awareness Car Rally” received by Brigadier K Satyanand, Commandant at Military Hospital (MH) in Secunderabad yesterday. It’s a part of 12th Army Medical Corps Reunion and 54th Biennial Conference. The rally has been organized under the aegis of Director General Medical Services (Army) and was initially flagged off on 14th Mar 2017 from Delhi. This will culminate in Lucknow on 7th Apr 2017 (“World Health Day”) covering a distance of 6,500 km by road, in five Gypsy vehicles.

Today, the team delivered a series of lectures on “Beat Diabetes and Organ Donation Awareness” for the troops and families. The programme was graced by Lieutenant General KK Agarwal, Commandant, Military College of Electronics and Mechanical Engineering. The General officer felicitated all the members with mementoes. Their endeavour to bring about health awareness was fully supported by MH Secunderabad. Additionally, a highly informative Health Exhibition and a Screening Camp for Diabetes and other Life style Diseases was organised. In response to the lectures a large number of Troops and families came forward to register for the noble cause of “Organ Donation”. Notes were exchanged and great bonhomie was expressed by all troops of the station and finally the “Health Awareness Car Rally” was wished good luck for their remaining journey. They will be flagged off by Major General Sharabh Pachory, General Officer Commanding, Telangana and Andhra Sub Area from MH Secunderabad tomorrow.

So far they have covered the cities of Chandigarh, Udhampur, Sri Ganganagar, Jodhpur, Ahmedabad and Pune by travelling a cumulative distance of 3500 km. Their next destination will be Kamptee and Nagpur. They are brimming with energy to cover the remaining cities of Sambalpur, Kolkata, Gaya and Lucknow before the team touch base at Delhi.

Thanks for sharing very useful information with us.