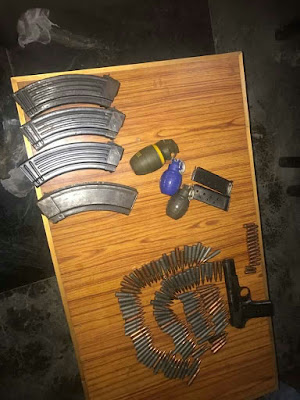 Based on a specific information about some arms and ammunition being smuggled across LOC through some goods truck meant to carry Cross-LOC trade merchandise a Naka was established by Baramulla Police in Uri area. The incoming goods laden trucks who had gone to Chakoti area of POK were being searched and while truck bearing Registration Number JK03B 1586 was being searched, the following recoveries of Arms/Ammunition were made from it 1. Chinese Pistol- 01 No 2. Pistol Magzines -02 Nos 3. Pistol ammunition- 14 rounds 4. AK Magzines - 04 Nos 5. AK ammunitions-120 Nos 6. Chinese Grenades -02 Nos .The said ammunition was hidden in a camouflage cavity of the said truck designed particularly for hiding arms and ammunition. The accused truck driver namely Irshad Ahmad Mantoo S/O Ghulam Rasool Mantoo R/O Buchpora Kulgam had received this consignment from one Terrorist Operative in Chakoti,POK and was supposed to deliver this to militants in South Kashmir. Case FIR No 07/2017 under sections of 7/25 Arms Act,13 Unlawful Activities Prevention Act has been registered in Police Station Uri and investigation into the matter is going on