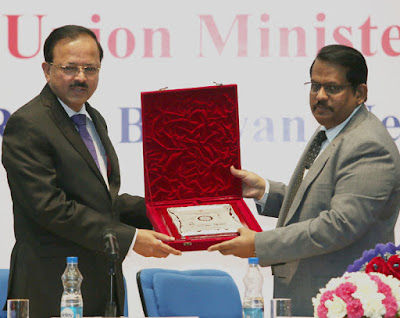 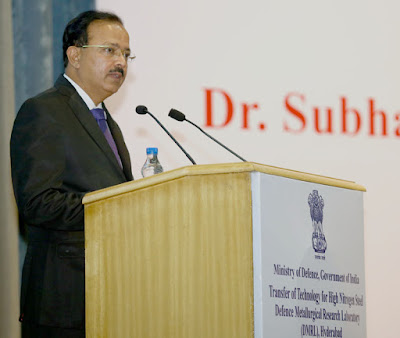 Defence Metallurgical Research Laboratory (DMRL), Hyderabad, a premier research laboratory of Defence Research and Development Organization (DRDO) and Jindal Stainless (Hisar) Limited (JSHL) signed the Licensing Agreement for Transfer of Technology of High Nitrogen Steel (HNS) for armour applications here today. Speaking on the occasion the Minister of State for Defence, Dr. Subhash Bhamre congratulated DMRL and DRDO for their outstanding achievement in developing a breakthrough technology for armour applications and complimented JSHL for partnering with DRDO. The Minister noted that HNS technology is a step forward towards Army’s quest for lighter and high performance armouring material compared to the currently used materials. He said, it has also the potential for a number of civilian applications and for exports as well. Dr. Bhamre asserted that this is a major step towards achieving the Prime Minister Shri Narendra Modi’s vision of ‘Make in India’ and wished the team a great success in future endeavours. The Minister called upon both public as well as private Industries and Ordnance Factories to use this material extensively in their products.

Chairman DRDO and Secretary DD (R&D) Dr. S Christopher complimented the scientists of DMRL for this achievement which comes as a giant leap forward, towards DRDO’s quest for stronger and high performance defence material. He further said that the Transfer of Technology from defence R&D to industry is aligned with the ‘Make in India’ policy to foster conducive environment for industry’s potential growth in the strategic sectors.

Mr. Abhyuday Jindal, Vice Chairman, JSHL appreciated the team efforts of DRDO to come out with innovative solutions of HNS. He assured that JSHL aims to be a major strategic defence partner in manufacturing of HNS.

Dr. Satish Chandra Sati, Director General (Naval Systems & Materials), while addressing the gathering applauded the DMRL scientists for developing many varieties of steel including HNS which would be of great importance to the industry. Dr. S. Guruprasad, CC R&D (PC &SI) in his welcome address stated that the HNS being a dream material for any researcher should find wide applications for the industry. DMRL has developed and established a number of frontline and path breaking technologies in the areas of metallurgy and material science. HNS is not only tough but also has good strength. In addition to being non magnetic as well as corrosion resistant, the HNS cost is about 40 percent less compared to Rolled Homogenous Armour Steel (RHA). Very few countries in the world have developed this technology of HNS. This material has potential for a number of defence and civil applications like armouring, mine trawls, oil industries etc.

JSHL is a stainless steel manufacturer, with state-of-the-art facility at Hisar (Haryana), backed with strong production facilities including the triplex refining route, which is used for production of HNS.
The programme was also attended by Dr. Sameer V. Kamat, Director, DMRL and several senior officials from the Ministry of Defence, the Army and JSHL.